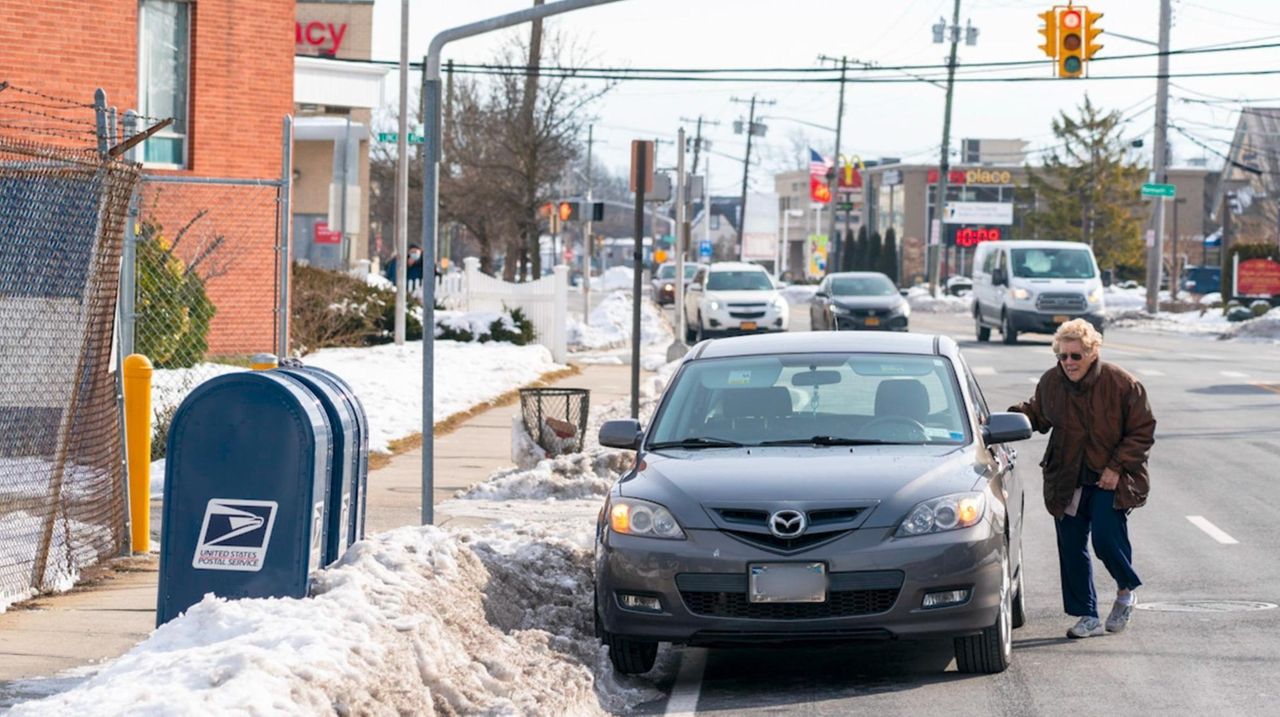 Oceanside residents are frustrated with the parking situation — or lack of it— outside the post office. Some say it’s “dangerous.”  Newsday's Cecilia Dowd reports. Credit: Newsday / Cecilia Dowd; Howard Schnapp

Oceanside residents contend that a dearth of parking in front of the local post office has created a hazard as harried motorists now park illegally along a busy lane of traffic to run inside and mail a letter or package.

"It's very dangerous," said Lou Biscotti, 72, a resident of the South Shore community.

For years, residents utilizing the Oceanside Post Office would park in front of the Atlantic Avenue building, a two-lane county road. But residents complained that vehicles turning from Lincoln Avenue would hit parked vehicles — often as motorists got out of their vehicles.

Nassau's Public Works Department performed a traffic study and in 2019 added a left-turning lane at the corner. The move prompted the Town of Hempstead to remove six parking spots in front of the Post office.

But spots were not added elsewhere, leaving residents with few good options. Some park in the CVS lot across the street or on Court Street, west of the post office's parking lot, which is reserved for employees. Most, however, have continued parking illegally in front of the post office, despite the "No Parking" signs.

"Parking right in front of the post office is an issue," agreed Hempstead Town Councilman Anthony D’Esposito. " … It clearly says that you can't park there and you're in a lane of traffic."

Mario Calderon 64, of Oceanside, said he witnessed one accident in which a driver's side door was crushed "like an accordion … It's good they put the signs up but people are still not honoring it."

"The county and town have been in communication on this issue and are working to resolve it," said DPW Commissioner Ken Arnold, who said Hempstead Town has asked the post office to designate up to seven of their 35 employee parking lot spots for customer parking.

But USPS spokesman Xavier Hernandez said allowing the public access to the rear parking lot would "compromise" security. The parking lot, he said, is filled in the mornings with carrier vehicles and large postal trucks.

"While we can appreciate the potentially unsafe conditions caused by a local decision to eliminate parking spots, it is not possible for us to allow the public to park in this internal parking lot," Hernandez said.

On Wednesday, Newsday observed dozens of cars parked illegally on the shoulder of Atlantic Avenue, including Maria, an Oceanside resident who declined to provide her last name.

"This is only place to park," she explained.

Another local resident who said he has osteomyelitis, a serious bone infection, said the traffic changes hurt the disabled.

"Where are we supposed to park," asked Gerry, who parked illegally and declined to provide his last name. "I am handicapped. I'm not allowed to park there but there's no choice."

Nassau Police have been issuing verbal warnings "as a way to educate drivers of vehicles who stop their vehicles on the main roadway, thus creating various traffic conditions," said spokesman Rich LeBrun.

"I am afraid to park over here," said Susan Felsen, 61, of Wantagh who works for a local bus company, "because I am afraid I will get hit by a car or someone will hit my car."

Mike Shannon described the situation as "infuriating" and "dangerous" for motorists.

"I don't necessarily want to see a lot of people getting tickets but I'd love for a little bit of enforcement for people to stop doing this," he said. "Because what other option is there right now?"

1:34 Fighting COVID-19: How medical experts have faced the virus
How to get a COVID-19 vaccine appointment
1:42 Transition to high school more troublesome because of COVID-19
2:19 A baby journal lost on the LIE to be reunited with family
2:15 Nassau holds 'Community Vaccination Day in Elmont
Nassau Executive Laura Curran in COVID-19 quarantine
Didn’t find what you were looking for?