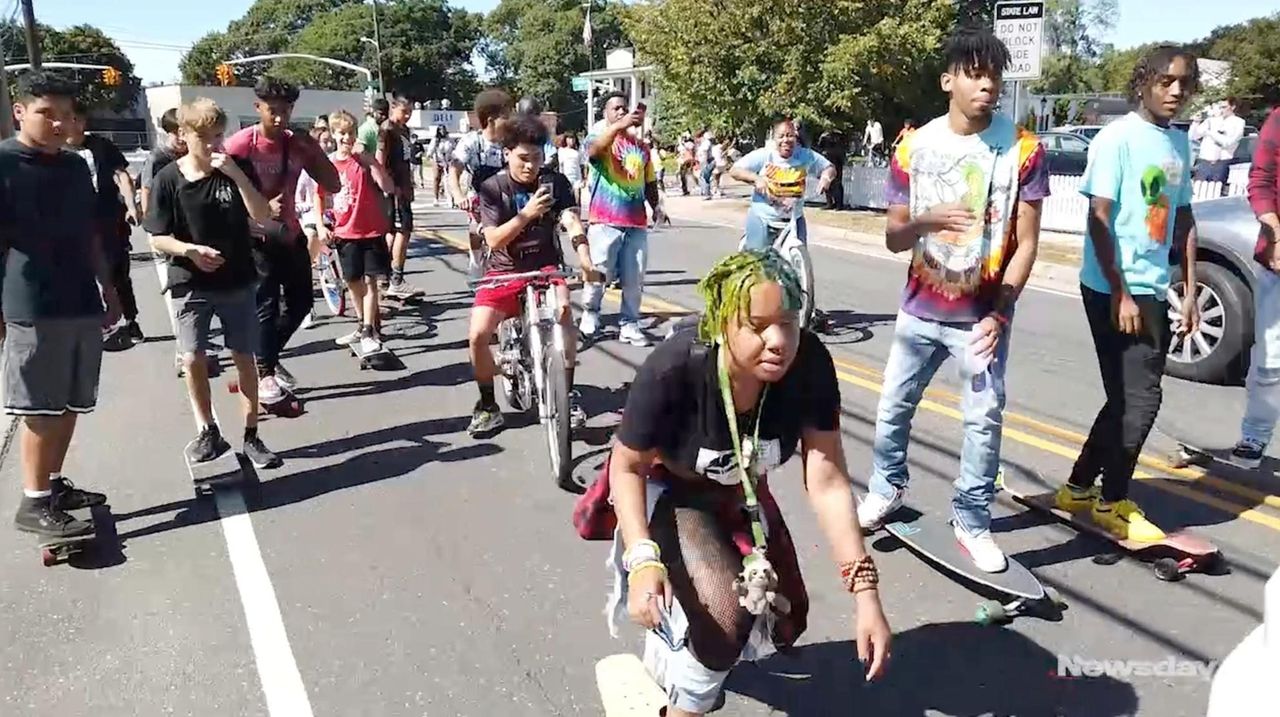 Family and friends gathered Sunday in Oceanside to ride bicycles and skateboards in tribute to Khaseen Morris, 16, who was fatally stabbed Sept. 16. Credit: Yeong-Ung Yang

Dozens of teenagers slowly rode out of an Oceanside funeral home Sunday under clear and sunny skies in remembrance of Khaseen Morris, the 16-year-old who was fatally stabbed nearly two weeks ago in an after-school fight.

Sunday's half-mile ride began at the Towers Funeral Home where hundreds had mourned Morris’ death at his funeral a day earlier. It ended at the strip mall parking lot on Brower Avenue where he was stabbed.

The last ride with Khaseen, his family said, was an occasion to celebrate his life and to lift up the teens who were left traumatized after witnessing the event.

Tyler Flach, 18, of Lido Beach, who police said plunged a knife into Morris and pierced his heart on Sept. 16 in a fight at the parking lot, has been indicted by a grand jury with a murder charge and a weapon offense. Seven more teens, all of Long Beach, were arraigned Saturday, facing assault charges in connection with the fight that killed Morris and injured a 17-year-old male.

Robles of Freeport, one of Morris’ best friends, described him as someone who was energetic, present and mature.

“He was the person I went to frequently when something happened randomly, and I'm like, ‘Yo, I need to tell you what just happened,’ ” Robles said. “When I was in trouble, he’s the one I went to ’cause he could give guidance and he was wise beyond his years.”

Trentin Chalmers, another one of Morris' best friends from Freeport, wore the same T-shirt Morris wore on the day he died. The blue shirt depicted an alien hugging its knees with a thought bubble that says, “I don’t belong here…”

“Knowing that this was his style and what he'd like to wear, it gives me strength,” the 17-year-old said before the ride.

In the past two weeks, Chalmers said he had been asked to describe one memorable instance he shared with Morris, with whom he spent time almost every day. But the moments he missed the most, he said, were the times they spent doing nothing.

“I feel like the most memorable parts of his experience with me were the times where we didn't do much,” he said. “He was my sense of security, like my second home. We literally have each other's back, and we could talk for hours about anything. The conversation would never stop.”

As the ride was about to begin, Chalmers danced to the beats of the music at the front of the crowd before they headed toward the strip mall. Near him was Khaleem Morris, who skated on his brother Khaseen’s skateboard Sunday.

“I felt peaceful,” the 19-year-old said of the 15-minute ride. “It’s very calming because it was something he liked to do.”