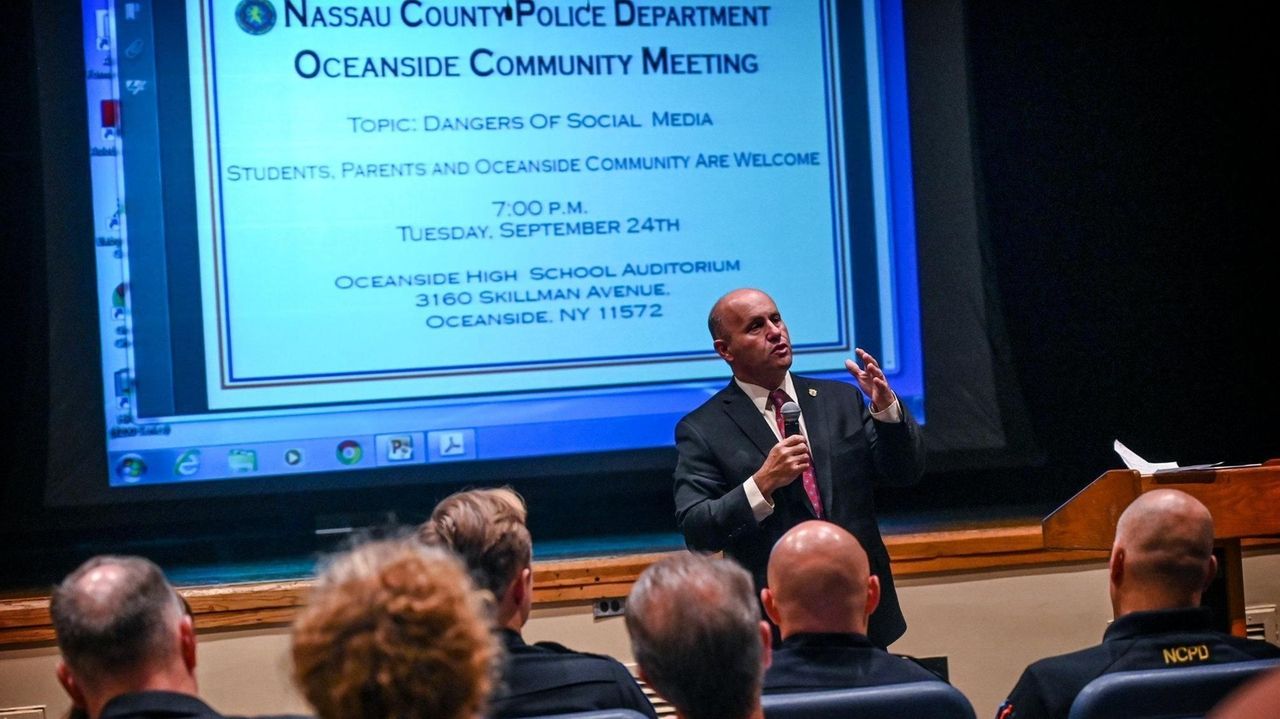 Police, following the killing of Khaseen Morris earlier this month, had initially said dozens of teenagers recorded the fight on their smartphones, instead of helping Morris, leading to viral media attention. Homicide Chief Det. Lt. Stephen Fitzpatrick had said at the time:  "Kids stood here and didn't help Khaseen. They'd rather video.”

But Ryder, speaking to more than 300 people at a community forum at Oceanside High School sponsored by police and titled the "Dangers of Social Media," said only about 20 kids were watching the fatal fight, and as few as two videotaped it.

Residents told Ryder they were upset their community was being “vilified” by the impression that Oceanside students were indifferent to the victim.

Manuel Rodriguez, 54, of Oceanside, who has a son in his senior year at the high school, said he was dismayed that no one intervened.
“Don’t stand there and watch it,” he said. “Help. ... It’s a kid. Do something.”

But other residents disagreed.

Steven Ballin, 71, of East Rockaway, who said he was in the parking lot in his car when the fight occurred, told Ryder he was glad he clarified the number of people who were watching the fight unfold.
“I don’t want the parents or family [of Khaseen] to think that there were 50 to 70 students who did nothing” Ballin said in an interview.

Ryder said that when Fitzpatrick made those comments, it was “a very emotional time, a very, very fluid time.” He had meant to emphasize the importance of sending police videos of the stabbing, Ryder said, but “It didn’t come across that way.”

Ryder told the crowd that “two to three kids videotaped that incident as it went down,” although he clarified in an interview after the forum that police do not know the number of people who videotaped the fight, only that police have recovered only two videos.

“Nobody volunteered those videos for us,” he said. “We had to find them and get them.”

Ryder said 14 people called 911 during or after the fight, including three who were put on hold for about 30 seconds because of the volume of calls and two who hung up.

Tyler Flach, 18, of Lido Beach, was indicted Tuesday in connection with Morris’ death. He had been initially charged with second-degree murder. The indictment is sealed and the charge or charges are not yet public. Flach pleaded not guilty at his arraignment on Thursday. He is being held in jail without bail.

Prosecutors have said that Flach and a group of about seven others went looking for Morris on Sept. 16 because the ex-boyfriend of a girl Morris was friendly with believed Morris was dating her. Morris had told him they were just friends and he had only walked her home from a party, at her request.

Ryder reassured residents that the killing was an isolated instance and that their community is safe.

“Was this gang-related, or do we have a gang issue in Oceanside?” asked Eric Donato, 48, of Oceanside, who said his daughter, a sophomore at Oceanside High, had heard rumors of gang involvement.

“This was not gang-related, and you do not have a gang problem in Oceanside,” Ryder assured Donato.

Lido Beach teen indicted in fatal stabbing of studentThe indictment remains sealed and the charge or charges are not public yet. Funeral set for teen stabbed in OceansideA funeral and visiting is scheduled Sept. 28 from 10 a.m. to 4 p.m. at Towers Funeral Home, 2681 Long Beach Road. Documents: Fatal stabbing suspect previously beat up different teenCourt records show Tyler Flach beat up a 15-year-old, leaving the victim with cuts and a black eye. Teens recorded fight instead of helping, police sayKhaseen Morris, 16, was fatally stabbed in a melee at the parking lot of a strip mall, authorities said.