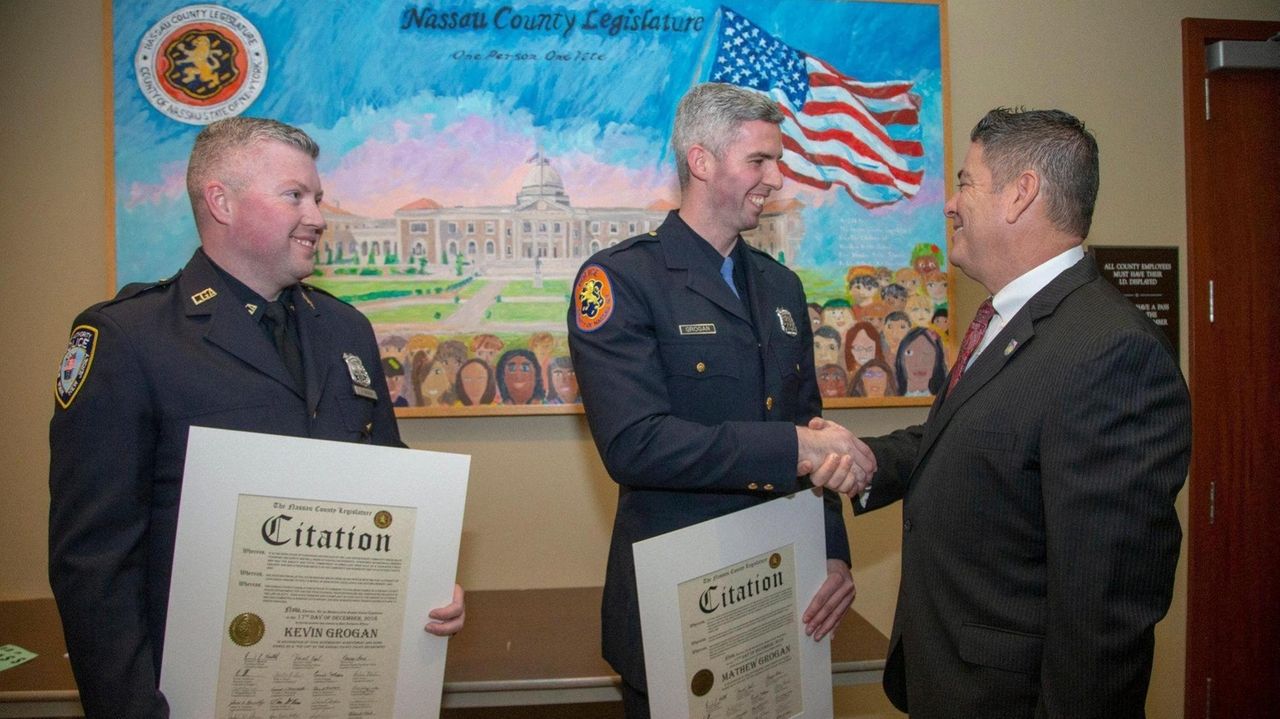 Kevin Grogan, 33, a Port Authority police officer, and Matthew Grogan, 28, a Nassau County police officer, teamed up last month to help foil the escape of a suspect, law enforcement officials said Monday as the brothers were honored during a ceremony in Mineola. Credit: Howard Schnapp

It was a brotherly bust.

Siblings Matthew Grogan, a Nassau County police officer, and Kevin Grogan, a Port Authority police officer, teamed up last month to help foil the escape of a woman who had robbed her husband of $80,000 and was preparing to flee to North Carolina, law enforcement officials said Monday.

On Monday, Matthew Grogan, 28, a three-year veteran of Nassau’s Fifth Precinct, was awarded the county legislature’s Top Cop honors during a ceremony in Mineola.

On Nov. 25, Camilla Folds, 45, threatened her husband, whose name was not disclosed, in the parking lot of a fitness club with a handgun, police said. Folds then went to her Franklin Square home, where she threatened her stepson with the same gun before taking $80,000 from a safe and fleeing in a Toyota Camry, officials said.

Matthew Grogan, who responded to the Franklin Square home, quickly provided a description of the suspect and vehicle over the police radio and Fifth Precinct detectives were able to trace Folds through her cellphone’s GPS to a location near LaGuardia Airport, McDermott said.

And that’s when Kevin Grogan stepped in.

Matthew Grogan contacted his older brother, who was on duty at LaGuardia, to pass along the suspect’s information, officials said.

Kevin Grogan, 33, a five-year veteran of the Port Authority Police, said officers were able to locate the vehicle in an airport parking lot.

Folds was charged with second-degree grand larceny, two counts each of coercion and attempted coercion, and one count of petty larceny.

Joseph Kilada, Folds’ Garden City-based defense attorney, did not respond to a request for comment.

The Grogan brothers, who grew up in Middle Village — their father is a Port Authority officer at Kennedy Airport — said they benefited from fortuitous timing.

“There was a lot of luck involved,” Matthew Grogan said. “Kevin just happened to be on duty that day.”

But McDermott said the siblings are professionals who understand how to exchange information.

“It’s like having a catch,” McDermott said. “[Matthew] threw a ball to him and then [Kevin] ran with it. It was excellent. Like a fine-tuned instrument.”

Folds is due back in court on Jan. 7.