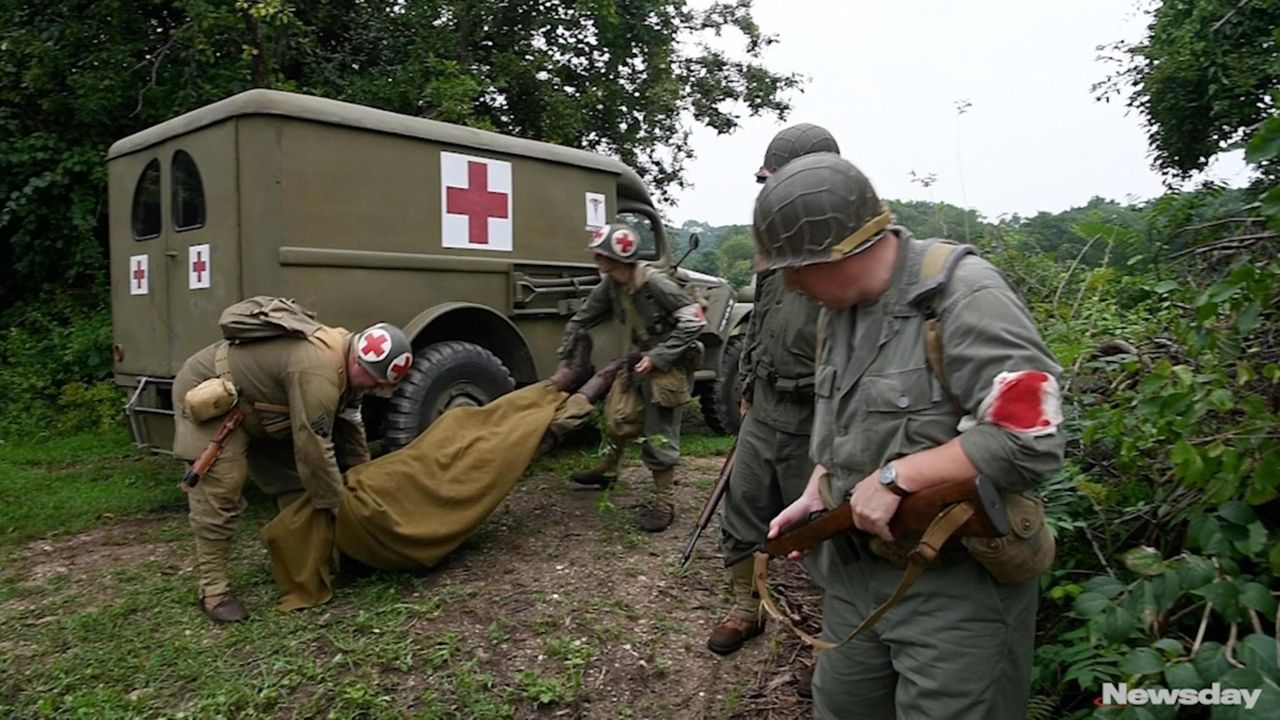 On Saturday, Aug. 18, 2018, shots could be heard across the Old Bethpage Village Restoration where re-enactors gathered to depict a battle from World War II. Among those actors was Matthew McGaughan, 13, of City Island in the Bronx, who portrayed a French Resistance member.   Credit: Daniel Goodrich

On a damp Saturday morning when many of his peers would likely be sleeping in, watching television or playing video games, 13-year-old Matthew McGaughan took to the battlefield.

Matthew, an eighth-grader from City Island in the Bronx, traveled early Saturday to the Museum of Armor at Old Bethpage Village Restoration in Plainview with his father to portray a young but earnest member of the French Resistance as part of a 70-minute World War II re-enactment.

Matthew was the youngest of the 30 or so volunteer actors at the museum Saturday.

In his pivotal role, Matthew guided weary U.S. Army soldiers — including his father, James — through the back roads of the French countryside on their way to liberate Normandy. Matthew wore period civilian clothing sewn by his mother, Kim. The role required he use hand gestures and a bit of French as he warned the American soldiers that the Germans were down the road setting up an ambush.

“I’ve learned more about the history aspect,” Matthew said. “And also I’ve kind of learned what honoring of veterans is all about.”

McGaughan, 55, said his father was a medic in World War II and one of his grandfathers was a machine-gunner during World War I. Performing as a re-enactor gave him a new appreciation for those in the armed forces, he said.

“I never knew what my dad had to go through,” McGaughan said. “You don’t realize your family members are a part of history.”

Performing with Matthew is a way for him to bond with one of his three sons.

And while school teaches the teenager about American history, volunteering as a re-enactor has allowed Matthew to live it.

“You could see what the enemy looked like,” McGaughan said. “There’s Germans, there’s French. We have women dressed up as nurses, Rosie the Riveters.”

Patrons can be embedded in an American armor column during the re-enactments for a donation of $100. Donors must wear a helmet and tanker jacket as they travel inside a World War II era vehicle during the show. The museum has such World War II vehicles as an M4 Sherman tank, several halftracks, scout cars and two M8 Greyhound armored cars.

Stacy Wasson, 52, of North Bellmore, has been a re-enactor at the museum since it opened. Saturday she played the role of a male medic.

“Both my grandfathers served in World War II and even though they passed, this is a way to reconnect with them,” said Wasson, an elementary schoolteacher.

Matthew said he has always liked history, an interest he and his father share. The two have been historical re-enactors at the museum since it opened four years ago. McGaughan did so previously at the American Airpower Museum in Farmingdale. The Museum of American Armor hosts these re-enactments at least once a month from April through October.

Arnold and Malcom Wadley, both 46, visited the museum for the first time Saturday as part of a birthday present from Arnold’s girlfriend, Angela Green, 43. The twin brothers said their father, William, served in the Army as a combat engineer in the early ‘60s, so the gift had a sentimental value for them both.

“The scenarios are realistic, and it puts you in a first-person perspective of what servicemen and women faced in combat,” said Arnold Wadley of Lindenhurst. “They really do a great job.”