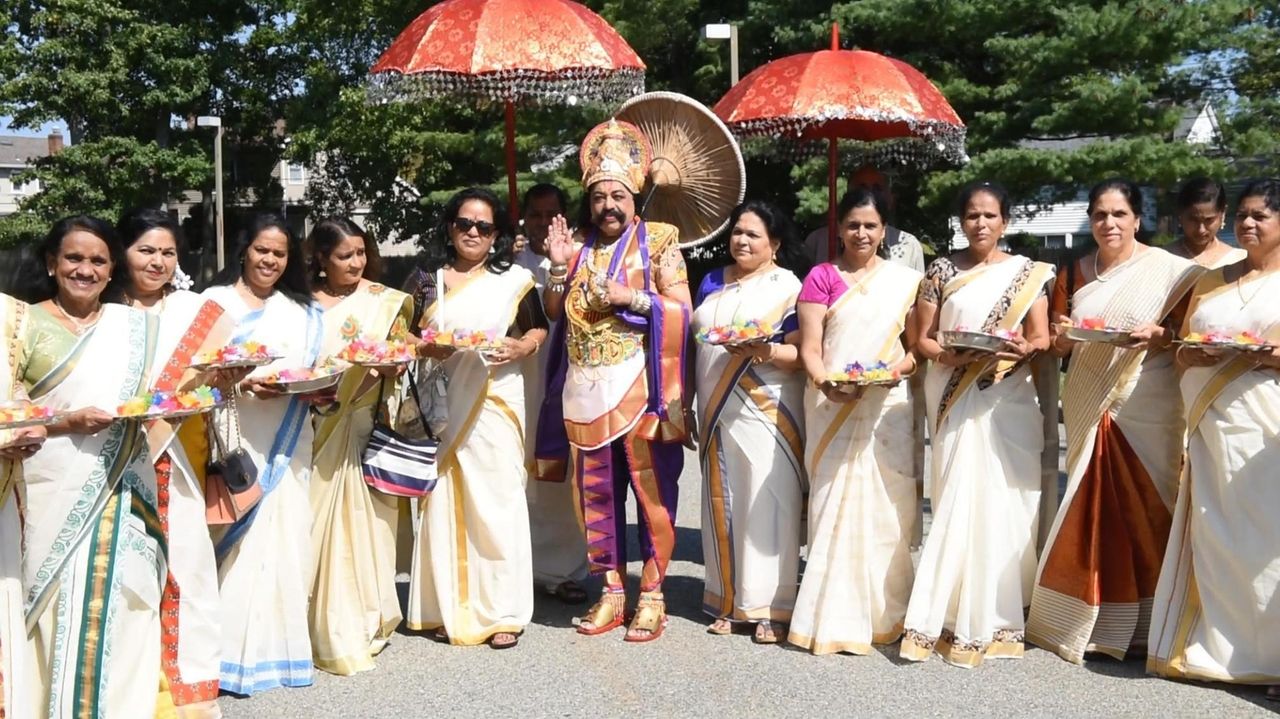 Hundreds gathered Sunday at Clinton G. Martin Park in New Hyde Park to celebrate Onam, which marks the end of the monsoon season and the rice harvest in the southern Indian state of Kerala. Credit: Howard Simmons

The nearly 8,500 miles between Long Island and the state of Kerala in southern India seemed to shrink Sunday as hundreds gathered for the annual Onam festival in New Hyde Park.

Onam, featuring a vegetarian feast, dancers and lighting of traditional lamps, marks the end of the monsoon season and the rice harvest in Kerala. Celebrated by the Indian diaspora all over the world, it highlights community over the self and equality over inequity.

“Onam is not just any festival for us in Kerala,” State Sen. Kevin Thomas (D-Levittown), the first Indian American elected to the New York State Senate, told the crowd at Clinton G. Martin Park. “Onam is something where all of us come together, regardless of our religion, regardless of our class in society. Where we sit together, we eat and we celebrate, like right now.”

The annual event, organized by the Indian American Malayalee Association of Long Island, typically includes Thiruvathira, a type of folk dance, Ganamela, a musical concert, and a percussion soundtrack known as Chendamelam. Sunday’s celebration marked the end of the 10-day festival, usually held in September.

Hundreds attended the event inside the park’s meeting hall, many having immigrated from Kerala themselves.

“It’s a festival of unity and prosperity,” said Usha Alfred, a Lynbrook mother who came to America about 15 years ago and was attending the festival with her family. “This is a time where we share love, food and equality.”

The festival also celebrates the mythical King Mahabali who is said to have reigned over a time of prosperity and justness in the region. It is believed he returns to Kerala during the festival to revisit the place and people he loved so much. He was rewarded with the annual departure from the underworld for sacrificing himself to the Hindu deity Vishnu.

Despite its Hindu origins, the festival is seen as a cultural event and celebrated by all in Kerala. It is not quite comparable to American Thanksgiving, said Aniyan George of Edison, New Jersey, the founding secretary of the Federation of Malayalee Associations of America, a national group. Onam emphasizes a gathering of a large community rather than just one’s own family, George said.

“It’s a celebration of all Kerala people, of all South Indian people,” he said. “We all believe in peace.”