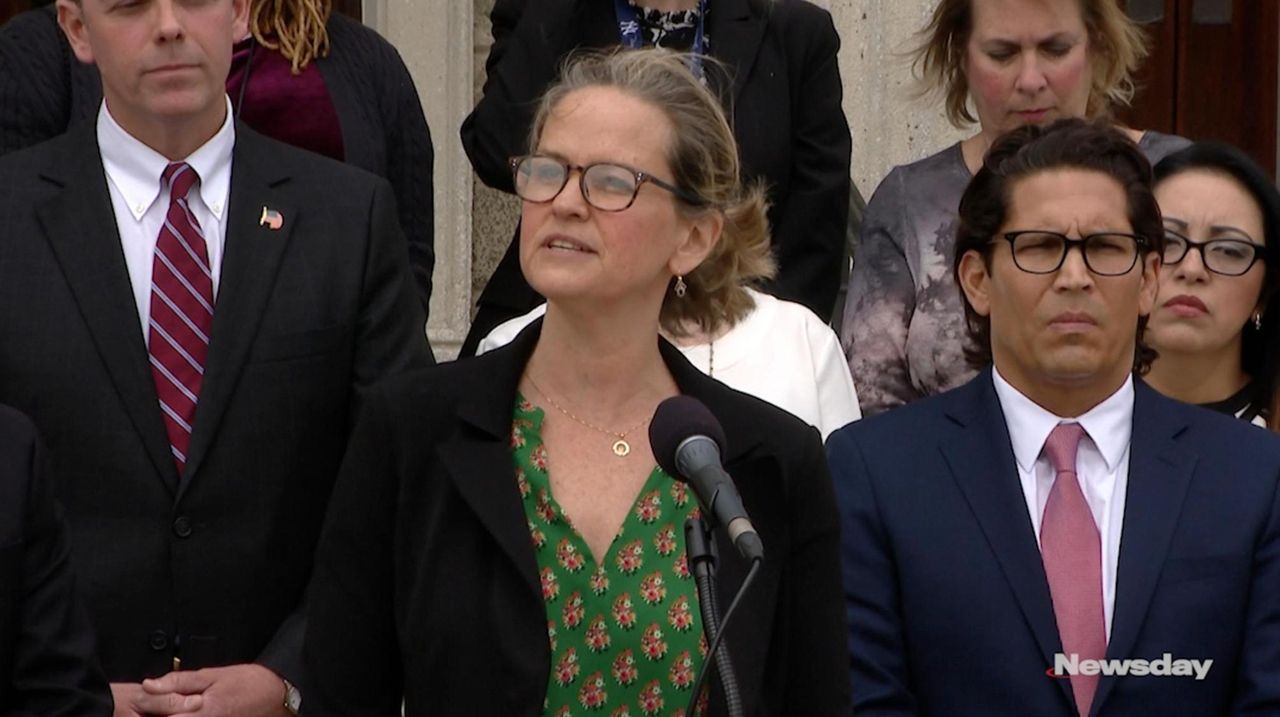 Nassau County Executive Laura Curran announced Thursday the formation of a task force which will compile a report detailing the services and resources Nassau County needs to combat the opioid epidemic. Curran said the report should be publicly released in 90 days.  Credit: News 12 Long Island

Combating the opioid crisis and its long-term consequences is the goal of a new task force composed of drug-treatment experts, legislators, an educator and a prosecutor, Nassau County Executive Laura Curran and Police Commissioner Patrick Ryder announced Thursday.

The eight-member task force, co-chaired by Ryder and Nassau County Legis. Siela Bynoe (D-Westbury), will issue a report in 90 days that identifies services and resources necessary to overcome an opioid epidemic that has claimed more than 3,600 lives on Long Island since 2010, Curran said at a news conference Thursday outside Nassau's executive and legislative building.

“We are gathering our best and brightest to develop a future-focused action plan that will address long-term treatment and education needs in Nassau County,” Curran said. “We cannot wait this crisis out. For every additional life we can save, there is another family that does not have to bury a loved one.”

Curran said she wants a “snapshot of what needs to be done” to identify services necessary to enhance current initiatives and fill needs not met by existing programs.

From 2010 to last year, there were an estimated 3,685 fatal opioid overdoses on Long Island, officials have said. Police and health officials in Nassau and Suffolk counties have mounted aggressive prevention, education, enforcement and treatment programs to combat the crisis. Their work has made a difference: Fatal opioid overdoses in Nassau and Suffolk counties decreased in 2018 after alarming spikes in previous years.

Narcan, a drug that reverses opioid overdoses, also gets some of the credit. It has been widely distributed across Long Island and administered thousands of times by first responders and residents in recent years, officials said. Nassau police used it 746 times in 2017, 630 times in 2018 and 234 times so far this year, Ryder said, and he hopes the task force will focus on re-energizing public attention on the opioid crisis.

The Nassau police department’s Operation Natalie, an effort to beef up enforcement and crime-mapping technology to identify drug hot spots, has also used town hall meetings to provide communities information about drug treatment and prevention. Some of those events drew hundreds but overall attendance has been sporadic and is declining.

“You start to lose focus,” Ryder said. “The energy starts to drop off.”

Ryder said the task force will bring experts in law enforcement as well as health and drug treatment together to present Curran with a multipronged approach to end the epidemic.

“We need to get a report done that provides you, the public, a snapshot of what goes on, get a historical perspective, a current perspective and how we are going to move forward to finally combat and win this fight on opiates,” Ryder said.

Scott said many people turn to drugs because they are suffering from untreated emotional wounds caused by physical and sexual abuse as well as domestic violence. Scott said he hoped the task force would focus on identifying and treating trauma in children.

“We need to start in the schools,” Scott said. “We need to identify kids who need mental health services.”

Forecast: Snow is falling on parts of LI
On the front lines of omicron: It 'hit us like a tidal wave.'
Barge off Long Beach surveys best route for wind-powered cable
Forecast: Up to 3 inches of snow for parts of LI
Wounded toddler the latest victim as NYC shootings spike
Teen testifies Uber driver asked her out for drinks, canceled her planned route
Didn’t find what you were looking for?