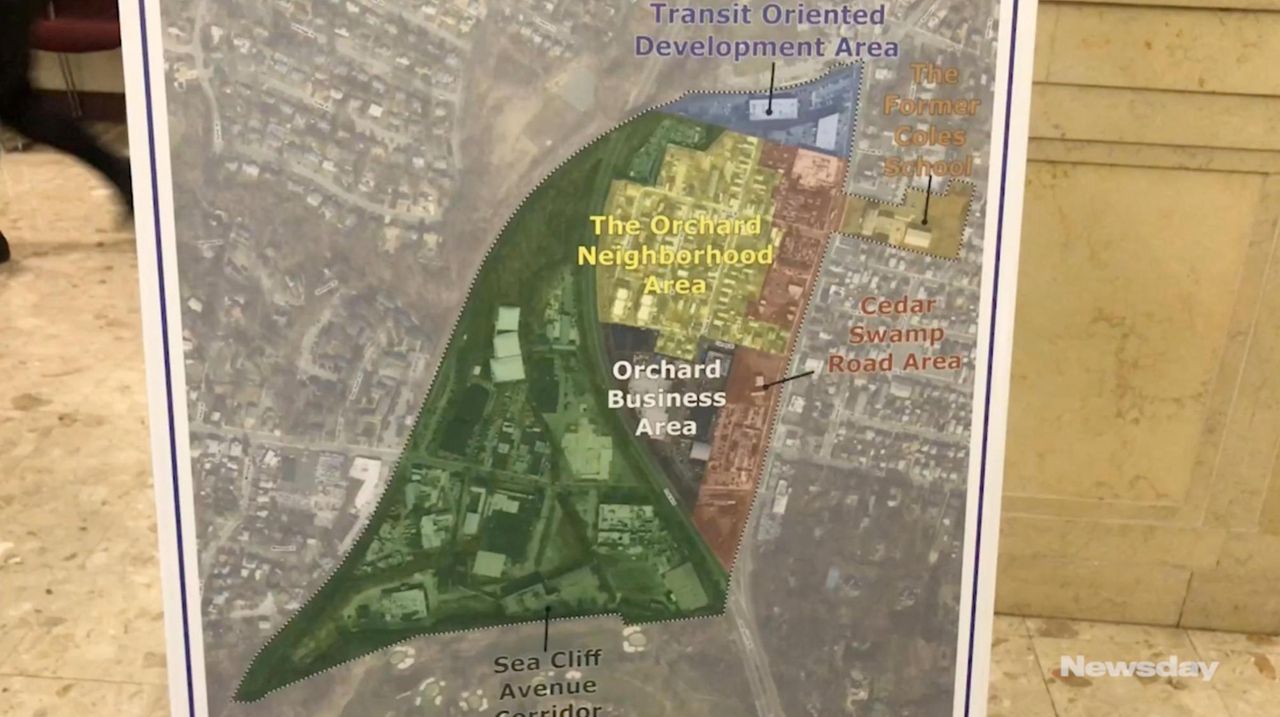 People who live in and near Glen Cove’s Orchard neighborhood are worried that a redevelopment plan will lead to displacement. City officials told residents at a Thursday open house at City Hall that that is not the intent. Credit: Newsday / David Olson

Glen Cove officials assured residents of the city’s Orchard neighborhood at an open house Thursday night that proposals intended to spur the building of town homes will not displace people there and may be withdrawn if there is enough community opposition.

City officials informally chatted with residents, developers and real estate agents for more than two hours, pointing to photos, maps and information placards that sat on easel stands in the City Council chambers.

“I hope some of the things you hear tonight will allay some of the fears residents have,” Mayor Timothy Tenke told three people who live in or just outside the Orchard, a majority Latino neighborhood where many are renters earning low or moderate incomes. “We’re not going to bring bulldozers to tear homes down. That’s not at all our intent.”

The mayor said if there is strong community resistance to the incentives to build town homes, “we’ll take it out” of the plan.

The proposed changes would reduce the minimum size of a town  home and the amount of land on which they can be built. The city will not take over properties; decisions would be made by property owners, said Ann Fangmann, executive director of the Glen Cove Community Development Agency.

Officials also discussed proposals for industrial and commercial areas near the Orchard, which include high-density housing next to the Glen Street Long Island Rail Road station and allowing stores and recreation-oriented businesses — such as a climbing gym or fitness center — on partially vacant land now zoned industrial.

The Orchard includes several parcels with vacant homes or businesses, and the intention is to focus redevelopment there, not on occupied housing, Fangmann said.

But Frank Caruso, who built 56 apartment units several years ago on the site of a former bowling alley in the Orchard and said he owns other land in the neighborhood, said he would consider demolishing housing to build new town houses or other structures. He declined to say whether any of the housing is currently occupied.

Mirian Campos, 19, a former Orchard resident who now lives a block outside the neighborhood, said that despite officials’ assurances she’s skeptical of any redevelopment plan that doesn’t guarantee that property owners won’t displace people.

”My main concern would be for the [City] Council to be able to tell us that they would 100 percent not remove anybody from the Orchard, that there’s no possibility,” Campos said.

Some current and former Orchard residents said they back a proposal to allow up to 40 units per acre next to the LIRR station, just north of the Orchard. Thirty percent of the housing would be designated "affordable," including 10 percent for people earning 30 percent or less of the area's median income.

Deborah Abiri, 24, said she moved from the Orchard to Manhattan largely because of the paucity of rental apartments in Glen Cove near train stations. She said she would consider moving back if apartments are built next to the Glen Street station, where she could catch a train to her job in Manhattan. High-density development is needed to keep young people on Long Island, where single-family homes are too expensive for most young adults, she said.

“People of my generation don’t want to own, they want to rent, and they want to live next to transit,” Abiri said.