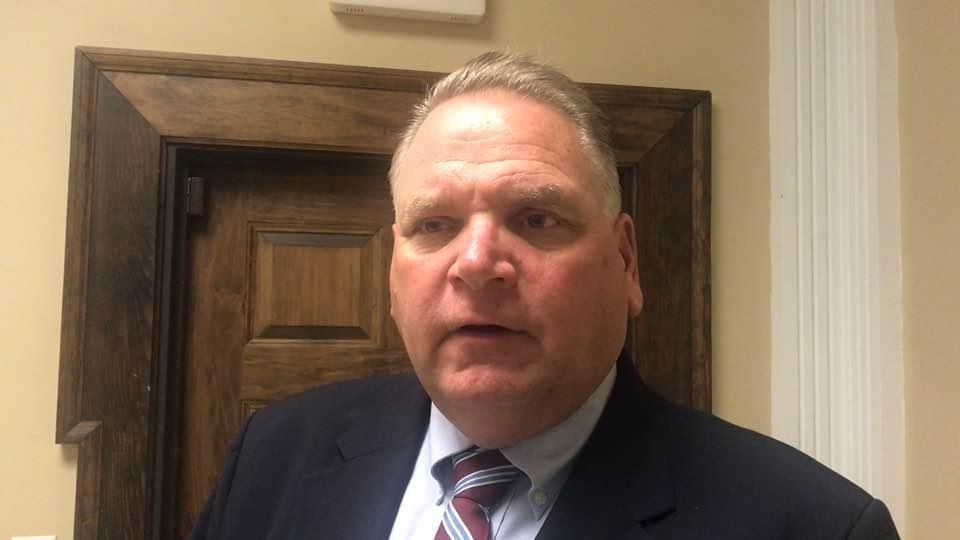 Oyster Bay Councilman Anthony Macagnone and Councilwoman Rebecca Alesia tried to preserve funding in the town budget for the public safety department at a meeting Tuesday, Oct. 24, 2017. Supervisor Joseph Saladino agreed to conduct a vote on an amendment that would save the department in November, after the election. (Credit: Newsday / Ted Phillips)

The Oyster Bay Town Board narrowly passed a 2018 budget at a special meeting Tuesday that cuts funding for the town’s public safety department.

The budget, which passed 4-3, was Town Supervisor Joseph Saladino’s first since he was appointed in January. The elimination of public safety drew opposition from Councilman Anthony Macagnone and Councilwoman Rebecca Alesia who, along with Councilwoman Michele Johnson, voted against the $298.8 million budget.

“It is our fiduciary responsibility as elected officials to explore and seek savings for taxpayers in every corner,” Saladino told the board regarding cutting the department. “We all know that if you don’t squeeze the pennies out of government you’ll never save a dime.”

The budget cuts the public safety department and anticipates transferring two dozen public safety officers to Nassau County in order to save $1.3 million. Saladino told the board the action was a step toward participating in a state program for consolidating services. The budget resolution includes a contingency that if the town board can’t get the necessary parties — Nassau County, the town and county unions — to agree by Dec. 1 to the transfer then the town will restore funding to the department.

Jarvis Brown, president of the Civil Service Employees Association Local 881, which represents town workers, said Tuesday he was against it.

“I will not agree to lose any member of the Town of Oyster Bay to any municipality, village or county,” Brown said.

In explaining his no vote at the meeting Macagnone said he wouldn’t cut 24 public safety workers after negotiating job security for union employees in return for concessions last year. He warned the rest of workforce, “they’ll be coming for you next.”

After the vote Macagnone, backed by Alesia, introduced a walk-on resolution to preserve the public safety department. Saladino called a recess to discuss it with Town Attorney Joseph Nocella. About 30 minutes later the full board returned and Nocella said Macagnone’s resolution as drafted was improper. Macagnone and Alesia said they still wanted a vote.

Alesia said Saladino had broken a promise made in an email last week to fund public safety.

“We could have had a proper resolution drafted except that we were kept in the dark,” Alesia said.

“There’s no question to what your feelings are,” Saladino said.

Saladino told Nocella to draft an amendment for the budget to preserve public safety to be voted on after the election. After tense debate, Macagnone relented and the meeting ended.