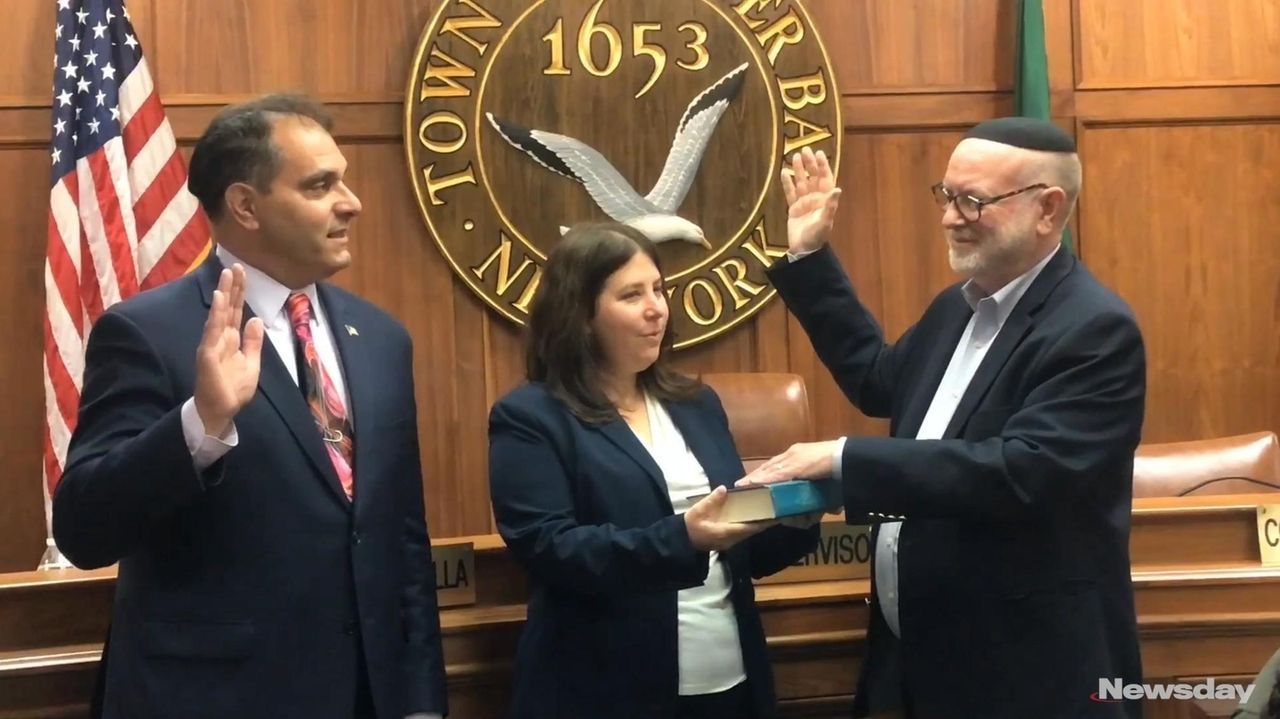 Rabbi Perry Raphael Rank of the Midway Jewish Center in Syosset was sworn in to the Oyster Bay Town ethics board on Tuesday, giving the board a third member, enough to meet again. Credit: Newsday / Ted Phillips

The Oyster Bay Town ethics board can resume meeting after the town board on Tuesday appointed a new member to give the panel a quorum.

Resignations from the five-member board had reduced it to two people — not enough to legally hold meetings. The ethics board has not met since January.

Rabbi Perry Raphael Rank of Syosset becomes the third member of the board.

“We’ll be continuing in our search to have a full board but with this one appointment we’ll be able to get back to work,” Town Supervisor Joseph Saladino said. Members of the ethics board are not paid.

Oyster Bay ethics board swears in new member Rabbi Perry Raphael Rank of the Midway Jewish Center in Syosset was sworn in to the Oyster Bay Town ethics board on Tuesday, giving the board a third member, enough to meet again. Credit: Newsday / Ted Phillips

Rank has served as the Rabbi for the Midway Jewish Center in Syosset since 1999, according to the synagogue’s website.

“He’s absolutely the right kind of person to be on this board, beyond reproach,” Councilwoman Rebecca Alesia said when seconding a motion to appoint Rank. The board voted 6-0 in favor of the appointment. Councilman Anthony Macagnone was absent from Tuesday’s board meeting.

“I love the Town of Oyster Bay,” Rank said after being sworn in by Saladino and Alesia. “I love what I see is going on in recent days and I hope to be part of the process of making sure that everyone can be proud of our government and proud of our leaders.”

The ethics board last met on Jan. 17. A scheduled March 14 meeting was canceled because the board didn’t have enough members for a quorum.

Town code requires the ethics board to review financial disclosure forms, investigate complaints, implement ethics training, create an annual report and review the ethics code. The town’s code, adopted in November 2016, states the ethics board must meet at least once every three months. It met nine times last year.

The ethics board appointments have staggered terms of one to five years and the board must include multiple political parties. Rank, a Republican, was appointed to a term running through Dec. 31, 2019.

Nassau assessments frozen for second year in a row
Pfizer board member: Likely no COVID-19 shot for kids under 5 until at least late March
PSEG puts its plan to offer $1,000 vaccine incentive on hold
Infrastructure improvements, COVID-19 boost LIRR on-time record
1:26
The school year began with rising hopes of a new normal. Then omicron hit.
Long Island forecast: A chance of snow overnight, and cold temps continue
Didn’t find what you were looking for?