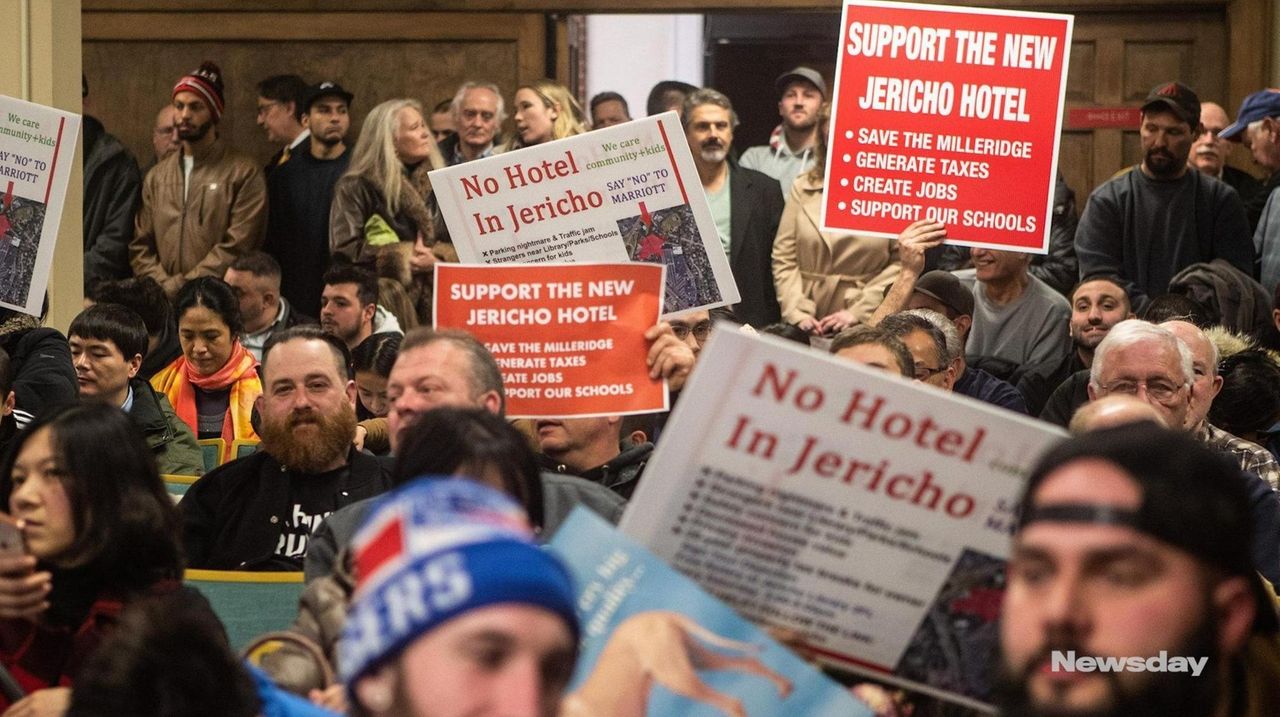 A crowd of more than 350 packed Oyster Bay Town Hall Tuesday night for a hearing on a proposed hotel in Jericho that has raised community concerns about traffic, safety and privacy. New Hyde Park-based Kimco Realty is seeking a special use permit from the town to allow it to build a three-floor, 93-room Marriott Residence Inn in a rear parking lot of the Jericho Commons shopping center, which Kimco owns. Credit: Newsday / Raychel Brightman

A crowd of more than 350 packed Oyster Bay Town Hall Tuesday night for a hearing on a proposed hotel in Jericho that has raised community concerns about traffic, safety and privacy.

New Hyde Park-based Kimco Realty is seeking a special use permit from the town to allow it to build a three-floor, 93-room Marriott Residence Inn in a rear parking lot of the Jericho Commons shopping center, which Kimco owns.

The project needs a variance from the town because it would provide 552 fewer parking spaces than the 2,128 required under the town zoning code. Signs supporting and opposing the hotel development appeared along roadways near the Milleridge Inn in Jericho ahead of the Tuesday night hearing, underscoring the intense interest in the proposal.

Board members Michele Johnson and Anthony Macagnone recused themselves from the hearing. Johnson said she was recusing herself because her father, Anthony Capetola, has a business interest in the Milleridge Inn, which is located on Kimco property. Macagnone recused himself, he said, because of his long involvement with construction unions.

Kimco’s attorney, Bram Weber of Weber Law Group LLP, led a two-hour presentation on the project at the hearing, with experts detailing traffic and parking studies and architectural plans.

Backers of the project at the hearing stressed the economic value of job creation, both during construction and to run the hotel as well as a need for more hotel rooms in the area. There are plenty of hotels already in the area, opponents countered, and they questioned why the project should get tax breaks — the developer has applied for tax subsidies with the Nassau County Industrial Development Agency.

Weber said Kimco had listened to the concerns of residents over the past three years and made “every accommodation we possibly could.”

Residents' fears of the project “are unfounded” he said.

Weber's presentation did not convince opponents, who appeared to significantly outnumber supporters during the the public comment portion of the hearing.

“A hotel should not be behind people’s houses,” said Tina Shan, 46, an accountant from Jericho. “Please do not destroy Jericho.”

Opponents said they worried about traffic and parking spilling into residential streets where children use the library and playground, transients coming into their neighborhoods, lower property values and loss of privacy.

The town board will accept comments from the public for 45 days.

The hearing on the proposal had originally been scheduled for Dec. 11 but it was moved to Tuesday night in response to resident complaints about insufficient notification and not scheduling the hearing during the day.

Opponents have held Saturday afternoon petition drives at the Jericho Public Library on Merry Lane, providing a notary for the petitions. They also have set up a website in English and Mandarin for organizing opposition. U.S. Census estimates from 2018 show that 31.9 percent of Jericho's population is Asian, compared with 11.1 percent for all of Oyster Bay Town.

The Birchwood Civic Association, which represents homeowners adjacent to the shopping center, came out against the proposal earlier this month.

2:45
Victim of Stop and Shop shooting a 'genuine great person,' friends and family say
Nassau police offer reward for info on acid attack
Going, going ...air show tickets selling out fast
1:30
'Just show up': Starting Friday, 60 and older will walk in for COVID vaccine
Report: MTA spent $1.1 billion in OT pay in 2020; top earners at LIRR
1:21
LIer makes mask chains, feeds the hungry from 9/11 until now
Didn’t find what you were looking for?