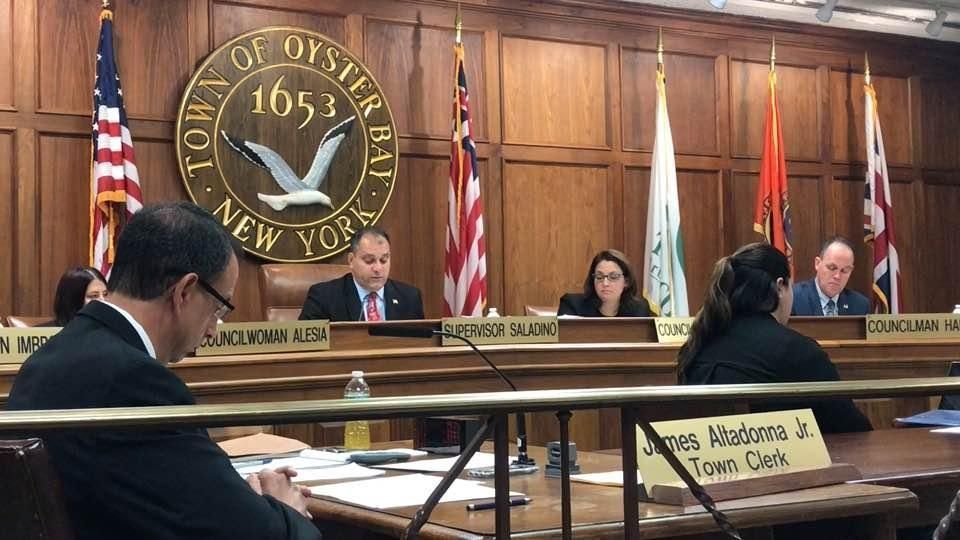 A proposal to eliminate Oyster Bay’s public safety department has ended because Nassau County would not agree to it, Town Supervisor Joseph Saladino said at Tuesday’s Town Board meeting.

The board last month narrowly passed a 2018 budget that included cutting the department in anticipation that two dozen public safety officers would be transferred to Nassau County to save the town $1.3 million. That budget included a contingency plan that gave the town until Dec. 1 to get all parties to agree on the plan. If not, the funding would be restored.

“While the town of Oyster Bay would achieve immediate savings through such an initiative, we have since learned that the county after analyzing all of the data have told us they would not realize the overtime savings they had hoped for, and for this reason the county will not sign on to the merger agreement,” Saladino said.

Chuck Ribando, Nassau County’s deputy executive for public safety, said in a statement Tuesday that “the county learned during its review of the Oyster Bay proposal that there would not be any savings realized.”

Saladino had said he hoped to take advantage of a state program intended to spur shared services between municipalities.

The proposal faced immediate opposition last month when the Civil Service Employees Association Local 881 came out against it on the grounds that it violated their collective bargaining agreement. The union’s approval was necessary for the proposal.

“I’m glad we don’t have to fight about it,” Jarvis Brown, president of local 881, said Tuesday.

“I was thrilled to see the budget restored for public safety,” Councilwoman Rebecca Alesia said Tuesday after the meeting. Alesia had spoken out against the proposal last month. “They provide excellent service,” she said.