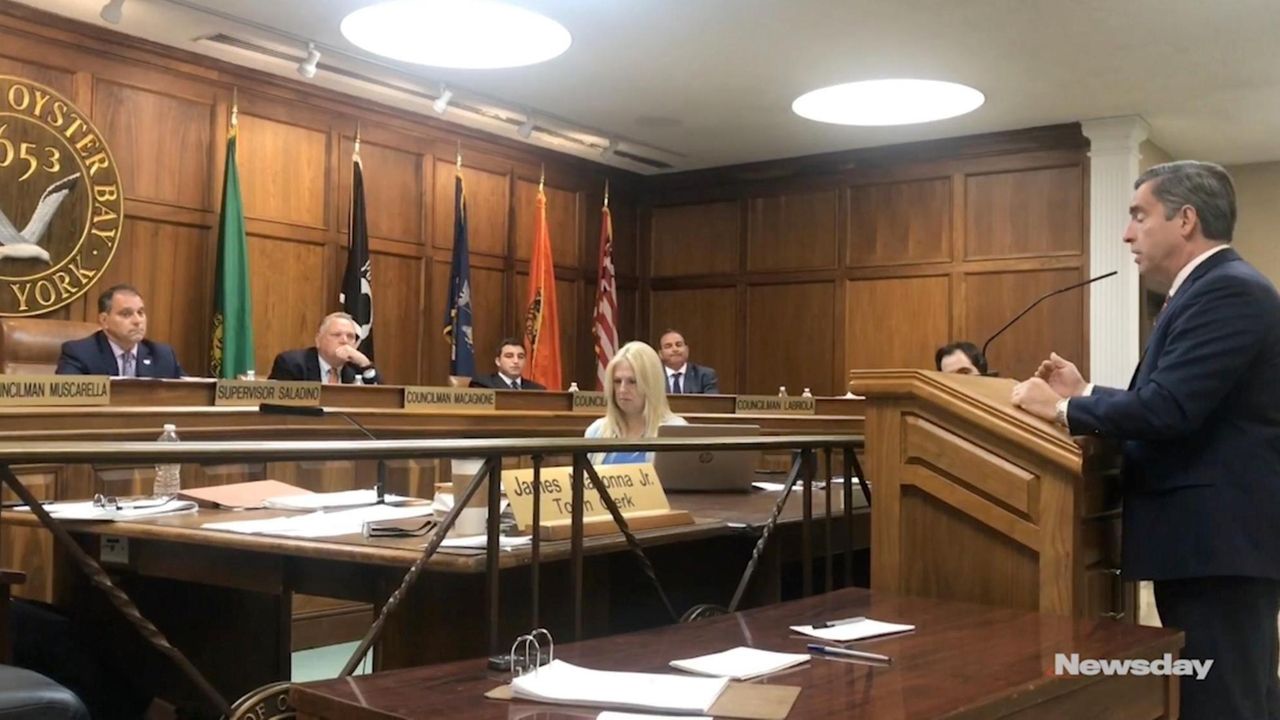 Oyster Bay Supervisor Joseph Saladino has stopped Town Clerk James Altadonna Jr., who is running against him in November, from speaking to the town board during public hearings or on resolutions during regular meetings. Town Attorney Joseph Nocella said at the May 21 board meeting that Altadonna won't be allowed to speak unless he appoints a temporary substitute for the entire meeting and sits with the public in gallery. Credit: Newsday / Ted Phillips

Oyster Bay Supervisor Joseph Saladino has stopped Town Clerk James Altadonna Jr., who is running against him in November, from speaking to the town board during public hearings or on resolutions during regular meetings.

"I really think it's appropriate that you speak at the end of the meeting during the public" comment portion, Saladino, a Republican, said at the May 21 town board meeting.

Town clerks, who are elected officials, perform an administrative role during meetings, but have in the past spoken on issues being considered by the Oyster Bay Town Board, interviews and records show.

Town Attorney Joseph Nocella said at the meeting that if Altadonna, a Republican running on the Democratic line, wants to address the board, he must temporarily "relinquish his role as town clerk," appoint someone to perform his duties for the entire meeting, and attend as a member of the public.

Nocella said Altadonna had been allowed to speak at previous meetings as a “courtesy” and a “matter of discretion.”

“But as Mr. Altadonna begins to exercise, or choose to exercise, his rights as a citizen more and more frequently, we can't continue to extend that degree of courtesy,” Nocella said.

At last week's meeting, Altadonna had asked to speak during a hearing on a proposed law to amend the town code on garbage pickup, but Saladino and Nocella said he could not. Altadonna addressed the board during the public comment period after the regular meeting and urged it to pass the law that would prohibit the use of garbage cans with permanently affixed lids that officials said can injure sanitation workers.

The Town of Hempstead allows its town clerk to speak at board meetings, after being recognized by the presiding officer, town spokesman Mike Fricchione said. Carole Trottere, spokeswoman for North Hempstead, said in an email the issue hasn't come up in that town, but did not elaborate.

Altadonna said in an interview he was being “censored” by the Oyster Bay town administration.

“I should have the opportunity to speak both as an elected official and as a resident,” Altadonna said. He said he should not have to recuse himself from an entire meeting in order to address the board. On May 7, the town board approved a legal notice for the hearing that said "all persons interested in the subject matter" could speak at the hearing.

During the meeting, Councilman Steven Labriola said Altadonna was “abusing” his “privilege” as clerk by addressing the board at the meeting.

“I've never spoken from the town clerk’s chair during the action calendar,” Labriola said of his tenure as town clerk. He added, “I've never seen a town clerk speaking and asking questions” at meetings.

Minutes of past town board meetings show Labriola spoke at hearings and meetings while serving as town clerk, including on a resolution to create a sister city relationship with Paduli, Italy, on Dec. 18, 2007, about parks and open spaces during an April 7, 2009, hearing on a bond issue, and about his grandfather’s experience as an immigrant before a vote on a law regulating some commercial licenses on June 9, 2009.

Former Town Clerk Martha Offerman said in an interview she spoke at town board meetings during her term in office from 2000 through 2003 at hearings and on resolutions.

“There were never any restrictions,” Offerman said. “If I felt I had to speak, I did.”