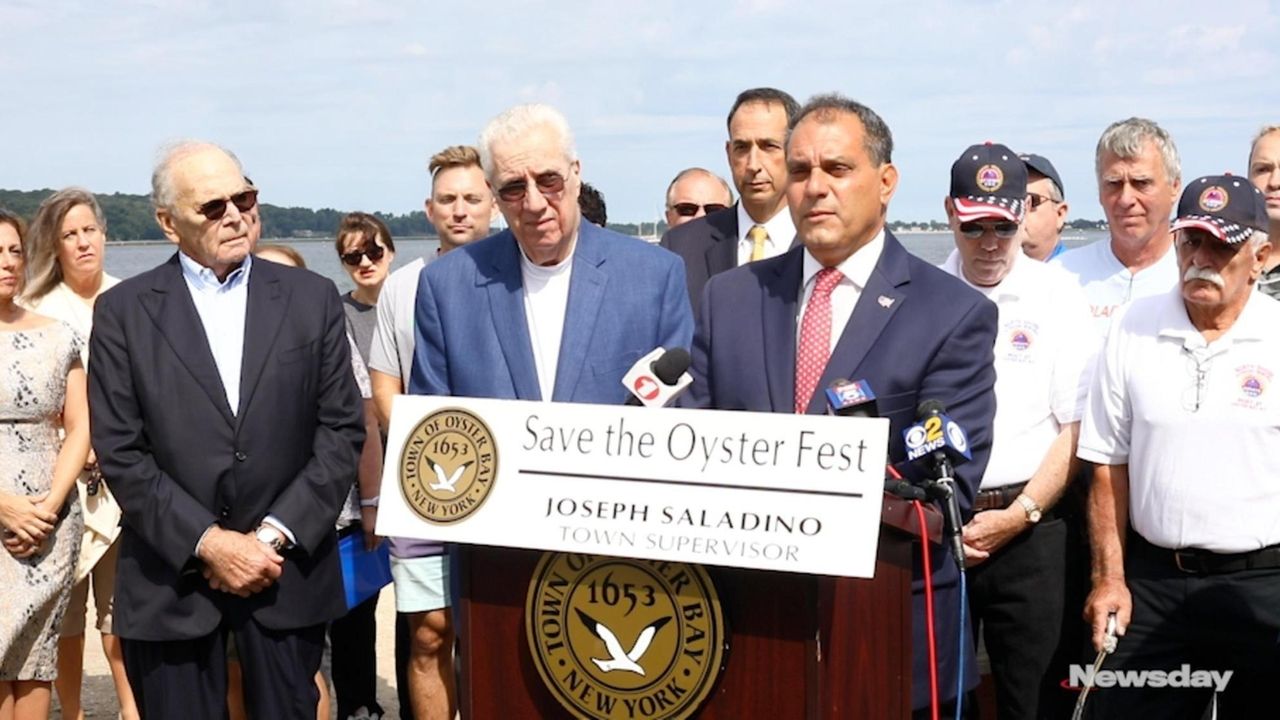 On Monday, Oyster Bay Supervisor Joseph Saladino announced at a news conference in Oyster Bay that the Nassau County Industrial Development Agency, along with other companies, will help to sponsor the annual Oyster Festival, after losing its title sponsor. Credit: Newsday / Chris Ware

The annual Oyster Festival is still without a title sponsor, but the chairman of the Nassau County Industrial Development Agency and the Oyster Bay Town supervisor both said the popular festival will go on as planned next month after offers of donations to cover thousands of dollars in funding shortfalls.

“We are very happy to report that there will be an Oyster Fest this coming October right here in Oyster Bay,” Town Supervisor Joseph Saladino said Monday at a news conference.

The supervisor said grocery chain Stop & Shop, Ferrari-Maserati of Long Island in Plainview and the Syosset-based Blumenfeld Development Group had each offered to donate $5,000.

Saladino said Monday that officials are seeking a title sponsor, which involves a $40,000 donation, as well as additional donors.

Town spokeswoman Marta Kane wrote Monday in an email that the Oyster Bay Rotary Club organizes the festival and reached out to the town for help getting new sponsors when "their original anticipated sponsors for 2019 pulled out or indicated they wouldn’t be returning for this year."

IDA chairman Richard Kessel had said Sunday that the agency planned to sponsor the festival, to be held Oct. 19-20 at the Theodore Roosevelt Memorial Park.

“We will fill whatever hole exists so that the festival can go on,” Kessel said in an interview. The sponsorship would require approval from the IDA board, but Kessel said “they’re all very supportive of the idea."

Last week, organizers of the festival said they were looking for a way to save the event after losing a sponsor. Altice USA officials said last week that the company had reduced its $20,000 sponsorship to $10,000 but will offer free advertising and television coverage.

Alissa Marti, spokeswoman for the festival, which is organized by the Oyster Bay Charitable Fund as a project of the Rotary Club, said Altice’s reduced contribution wasn’t the only funding problem they faced. One other sponsor from 2018 did not come back this year, she said, declining to provide more details of the festival's current financial situation.

Marti welcomed news of the IDA's involvement. “That’s great news . . . I hope the board votes for it,” she said.

In a letter Sunday to Kessel, County Executive Laura Curran asked the IDA “to consider a sponsorship of ‘Oyster Fest’ to ensure the continuity of one of our region’s beloved seasonal events.”

Curran wrote that making sure the festival continues in 2019 “will not only spur economic activity, but will continue to showcase Nassau County as a great place to live, work and play.”

Kessel said sponsoring the festival, which organizers say draws more than 150,000 people, is aligned with the IDA’s mission to promote economic development.

“The Oyster Fest is a huge success every year,” Kessel said. “It’s critically important that it goes forward. It’s part of our mission to promote downtowns. We’d be glad to step in to try and help to make sure the festival goes forward.”

The funding problems prompted Saladino to waive a $20,000 town fee for the event.

The festival’s Facebook page said Saturday that former State Sen. Carl Marcellino had made the first private donation to the event.

Nassau County Democratic Committee chairman Jay Jacobs issued a statement Saturday offering the committee’s financial support to the festival and criticizing Saladino’s leadership for putting the event in “peril” by not securing funds.

"It is unfortunate that your administration was not able to work diligently in advance of this late notice to secure the appropriate supporters to sponsor this iconic event," Jacobs said.

"The Oyster Festival is run by a nonprofit organization, not the Town of Oyster Bay, and Jay Jacobs’ attempt to create a false impression illustrates just how political and self-serving his offer really is," Nevin said, adding that festival organizers have for decades kept the event free of political involvement.

Kane said in an email Sunday that the town and the “festival committee” had not heard from the IDA, but “we welcome their participation.”

CORRECTION: An earlier version of this story misidentified the Blumenfeld Development Group, which Oyster Bay officials said has pledged to donate $5,000 to the Oyster Festival. The Oyster Bay Rotary Club was also identified as a sponsor of  the festival, but it is the organizer of  the event.