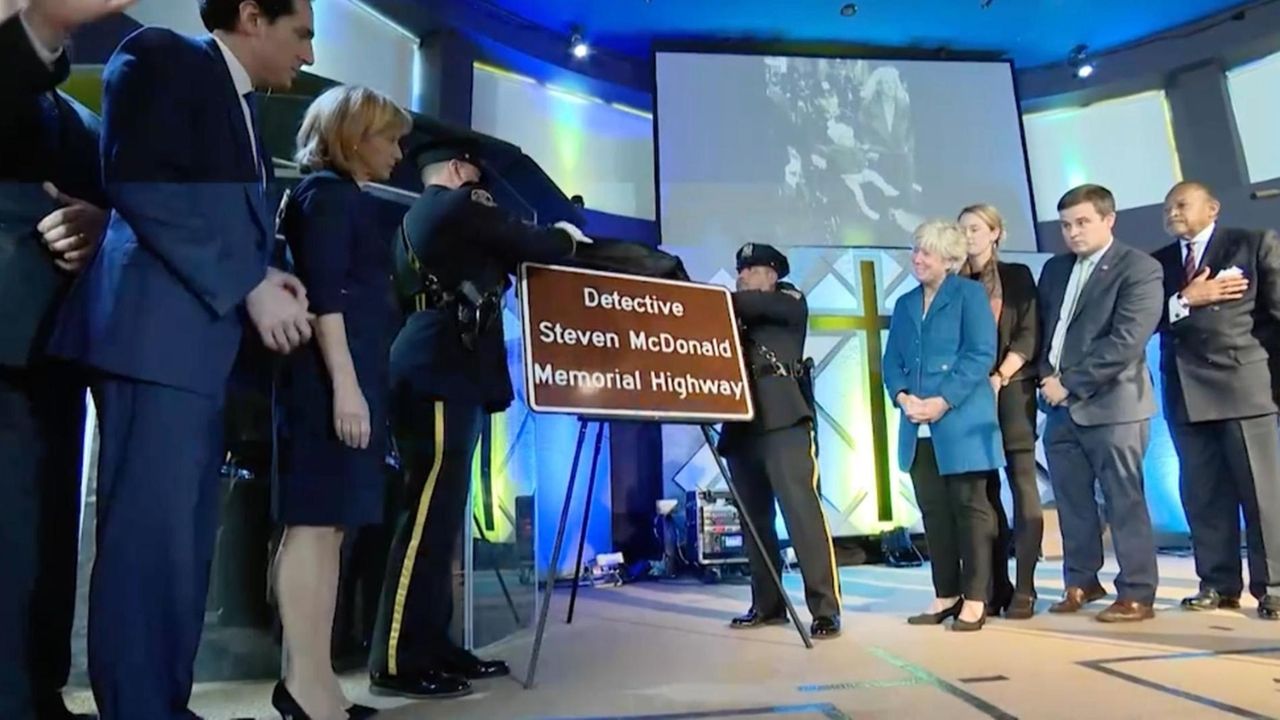 Det. Steven McDonald, who became an inspriation to many after a line-of-duty shooting in Central Park left him a quadriplegic in 1986, had a section of the Southern State Parkway named for him at a ceremony in Malverne on Friday, February 9, 2018.  Credit: News 12 Long Island

How fitting it is that the latest honor for fallen police hero Steven McDonald should be the renaming of a highway for him, replete with road signs. Road signs, doing precisely what he did: giving people direction.

“For generations to come, people from all over New York City and Long Island will see his name and wonder: Who was Det. Steven McDonald?” New York City First Deputy Police Commissioner Benjamin Tucker said during a ceremony Friday on the renaming of the stretch of the Southern State Parkway. “Each time that happens, it will be one more opportunity to tell Steven’s story and share his message of compassion, empathy and self-sacrifice.”

In a ceremony that spangled with police brass, elected officials and clergy, public officials announced that 8.5 miles of the roadway — from the Cross Island to the Meadowbrook Parkway exits — will be The Steven McDonald Memorial Highway.

The event at The Bridge Church in McDonald’s hometown of Malverne served as another chance for people to pay homage to the police officer who, despite being paralyzed from the neck down by gunfire in 1986, rose above his challenges and eventually forgave his young assailant. He died Jan. 10, 2017, at 59.

Any sign of sorrow Friday was eclipsed by the shared joy of those who carried on his message of courage and forgiveness.

No one conveyed the challenge of living that philosophy better than McDonald’s son, Conor. Growing up with a father who needed a wheelchair and ventilator tube was tough, he said.

“There were a lot of times when I was extremely upset and angry about my father being in that wheelchair and suffering as much as he did,” Conor McDonald told the few hundred people in the church.

But late-night talks with his father helped him get beyond those feelings, he said.

“You couldn’t leave that meeting with my dad without understanding how important love and forgiveness are,” he said.

McDonald was shot three times by 15-year-old Shavod Jones as the NYPD officer and his partner questioned the teen about bicycle thefts in July 1986. Just months after the shooting, McDonald forgave Jones.

For decades to come, the third-generation NYPD officer and his wife, Patricia Ann, were fixtures at metropolitan-area events — putting a public face to the sacrifices made by the men and women in blue.

Crisscrossing the country speaking at public and police events, McDonald became a revered figure among cops — including his son, who is a sergeant with the New York City Police Department and the fourth generation of police in the family.

Patricia Ann McDonald, who serves as mayor of Malverne, said how proud she was that the stretch of road passes through Malverne.

She recalled an uncommonly heroic moment when she and her husband were discussing moving into a new home. Steven McDonald suggested moving into the house across the street from his wife’s mother.

“Are you kidding?” she recalled telling him. “You want to be that close?”

They bought the house.