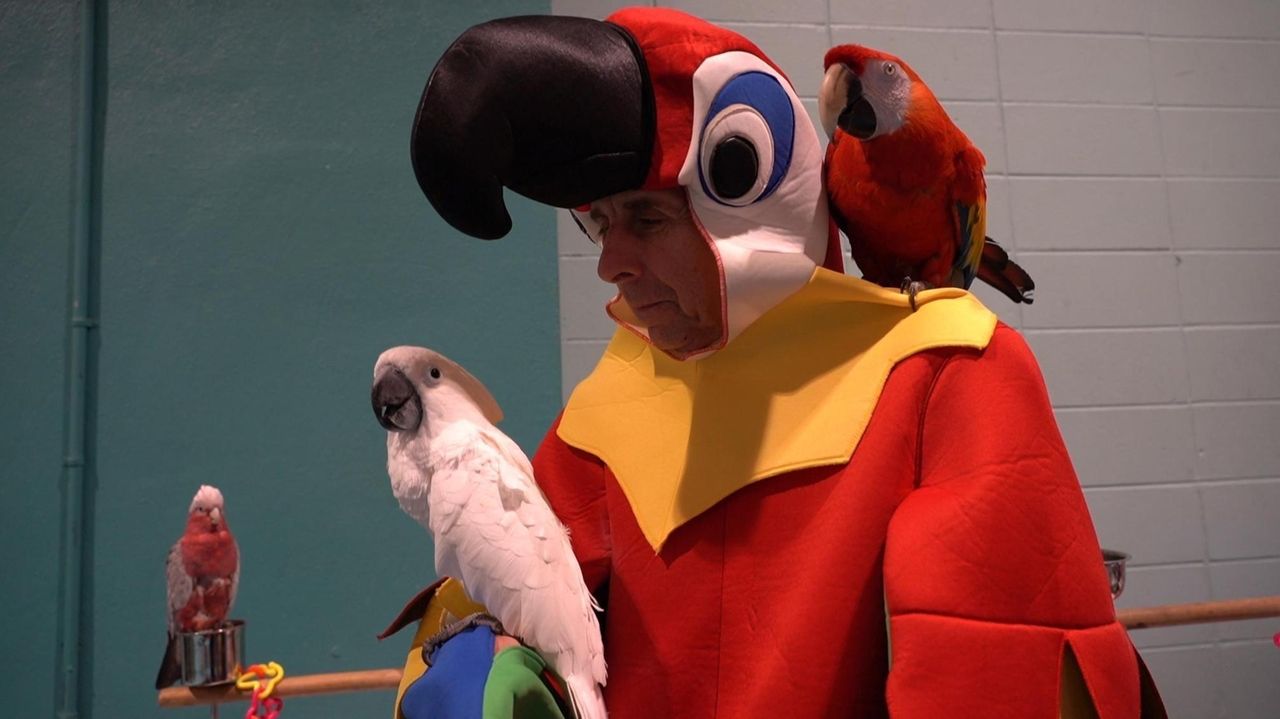 The expo featured everything from educational panels on exotic birds, to face-painting for children, to photos with parrots of the attendee's choice. Credit: Newsday / Deborah Egan-Chin

Bird-lovers and those looking to adopt a parrot for the first time had a chance to glimpse and play with birds ranging from olive-green parakeets to African grey parrots, red toucans and more Saturday in Freeport.

The 2019 annual Parrot Expo, hosted by Babylon-based nonprofit The Long Island Parrot Society — whose mission is to improve the lives of psittaciformes, or colorful exotic birds — drew several hundred people through the day at the Freeport  Recreation Center.

Normally attracting between 800 to 1,000 people every year, the expo featured everything from educational panels on exotic birds to  a meet-the-vet area, face-painting for children, photos with parrots of  attendee's choice and bird handlers allowing people to touch, pet and get up close and personal with birds from white-feathered cockatoos to conures, scarlet macaws and more.

Monique Doherty,  of West Hempstead, and her family were delighted with the chance to interact with the birds in their first time attending the expo. Already owning several pets, including two birds, Doherty said she was interested in adopting a parrot.

“They’re beautiful and they’re majestic,” Doherty said, adding that she loved how the birds they had interacted with at the expo took a liking to her daughter and nephew.

Doherty’s daughter Alanna Anadollis, 11, of West Hempstead, said she loved having one of the birds perch on her shoulder. “It’s like having a friend. It’s like they’re people,” Alanna said.

Doherty’s nephew, Shane Doherty, 17, of West Hempstead smiled as he recalled meeting a cockatoo named Ajax, who he was able to pet affectionately.

“When he saw me coming, he was bobbing his head, almost dancing,” said Shane Doherty, who wants to be a veterinarian someday. “I love how intelligent they are.”

Shawn Florman, a volunteer with the parrot society and member of its Adoptions Committee, said the parrots were very different most pets that people adopt. “A parrot isn’t a pet. It’s a companion,” said Florman, noting that a parrot’s life span could  be as long as 60 years.

More than halfway through the expo, Florman, who fielded questions from experienced parrot owners to prospective first-time bird owners, said he had handled at least five applications from people interested in adopting parrots through the society.

“It may not sound like a lot, but for us, it’s huge,” Florman said.

Ashley O’Neill, 36, of Baldwin, and her daughter Eva, 2½, said she enjoyed an exotic bird panel hosted by TV personality and animal trainer Nicholas “Nature Nick” Jacinto, as well as interacting with the birds. O’Neill, an animal rescuer, said she wanted to make sure her daughter was comfortable with such birds as she grow older.

“I want to make sure that she’s good with them, and [the birds] were very good with her,” O’Neill said.

1:32 'I feel protected': LI vaccine sites expand access to COVID-19 shots
What you need to know about COVID-19 vaccine development
How will homebound patients get the COVID-19 vaccine?
3:04 Nassau DA: Doctor charged with murder in deaths of 5 patients
1:26 State sees decreasing virus positivity, but LI yields higher rate
4:01 COVID-19: From 799 deaths in one day to path back to normalcy
Didn’t find what you were looking for?