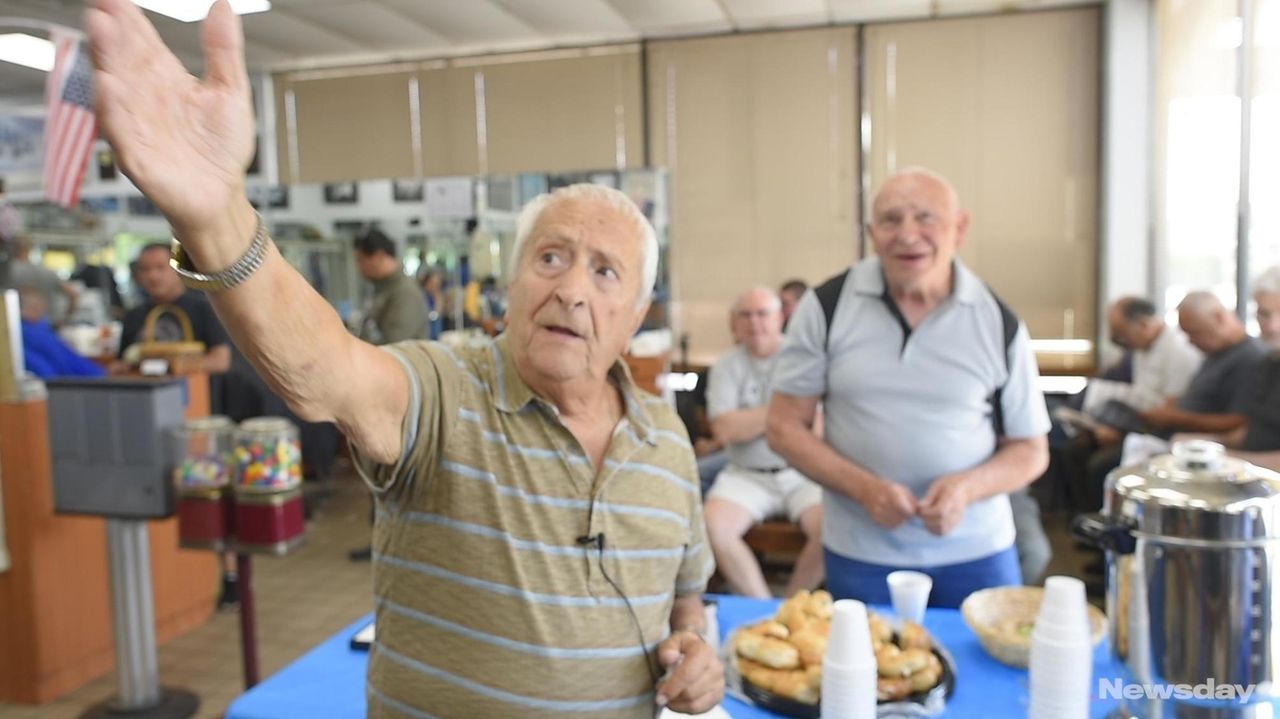 Pasquale Palumbo started sweeping up hair in his uncle's barbershop in Sicily at the age of 10. Nearly 80 years later, he is celebrating his 90th birthday and Pat’s Barber Shop in Levittown will mark its 50th year of being in business. Credit: Johnny Milano

Pasquale Palumbo was 10 when he swept up clumps of hair at his uncle’s barbershop in Sicily.

Nearly 80 years later, Palumbo is still working in a barbershop — his own — Pat’s Barber Shop in Levittown.

A big smile spreads across Palumbo’s face when he talks about how a combination of good service and cheap prices — a man’s haircut costs all of $6 — have earned him loyal patrons. A good number of his regulars have been getting a little taken off the top for decades.

“I say God bless America. This is a dream. I have 11 people working for me,” said Palumbo, whose nickname is Pat. “I’m still working.”

Every Father’s Day weekend, employees throw a customer appreciation celebration. And one is set for this year, too — from noon to 3 p.m. Saturday. But it will be extra special.

The party — complete with a DJ, gelato, hot dogs and other goodies — will mark Palumbo’s 90th birthday on Sept. 9 and his 50 years in the business. His son and daughter, Charlie Palumbo and Rose Drummond, run the shop these days.

Drummond, 57, marvels at how quickly the years have gone by and what an important role the barber shop plays in her father’s life.

“Here he is, he’s 90,” Drummond said. “This keeps him going. He gets up. There’s some place to go. There’s something to do. He absolutely loves it.”

Pat Palumbo landed on Ellis Island in 1958 with little more than “a pair of pants” to his name.

He gave his first haircuts to the airmen stationed at Mitchel Air Force Base, now called Mitchel Athletic Complex. In the late 1960s, he opened a barbershop in Manhattan on Church Street. One of his customers, Mario Cuomo, went on to be elected governor three times.

A photograph of Cuomo hangs in the Levittown place, along with pictures of Italy’s World Cup soccer championship team, the movie “The Godfather,” which has scenes filmed in Sicily, and the Rat Pack — the 1960s fivesome of Frank Sinatra, Dean Martin, Sammy Davis Jr., Peter Lawford and Joey Bishop.

Somewhere along the way, Palumbo met Murray Pergament of Pergament Home Centers, a regional chain of home centers that started with a couple of paint stores on Long Island. Pergament had a barbershop in his Hempstead Turnpike location and offered to let Palumbo take it over. Palumbo did — and stayed until 2002, when he moved his business across the street.

Although the locations have changed, much else hasn’t.

“Every two weeks, I’m here religiously,” said Scot Abrams, 45, who has been a customer since he was 13. “It’s always ‘Hey Scot, how are you?’ It’s always a hug and a handshake.”

Abrams will never forget the kindness that Palumbo and one of his barbers, Carmine Colasuonno, showed him after he fractured several vertebrae in a motorcycle crash that happened when he was with the New York Police Department’s highway patrol.

“They came up to the hospital and gave me haircuts,” said Abrams, who is now an NYPD detective. “There are no words to express my gratitude.”

Colasuonno, 69, has worked for Palumbo for 40 years. “It’s like family. Generation after generation. It’s friends, family, everybody together. When they come here, it’s like coming to the house for them [customers].”

On a busy morning at the shop, Town of Oyster Bay Supervisor Joseph S. Saladino stopped in and presented Palumbo with a certificate of appreciation signed by town council members.

Saladino, a customer himself, described Pat’s Barber Shop as “what America is all about: customer service and making you feel like family every time.”

And like with every family, the warmth and love comes with a bit of bickering and a sprinkling of lighthearted spats — especially over Palumbo’s pet peeve: barbers talking on their cellphones at work.

Carmella Armenia, who has been cutting hair for 25 years at Pat’s, knows of what she speaks.

“He yells at me all the time;I let him yell at me,” said Armenia, 74. “He’s old school. You can’t change him. I tried to hide it before he sees you, but you get caught all the time.”