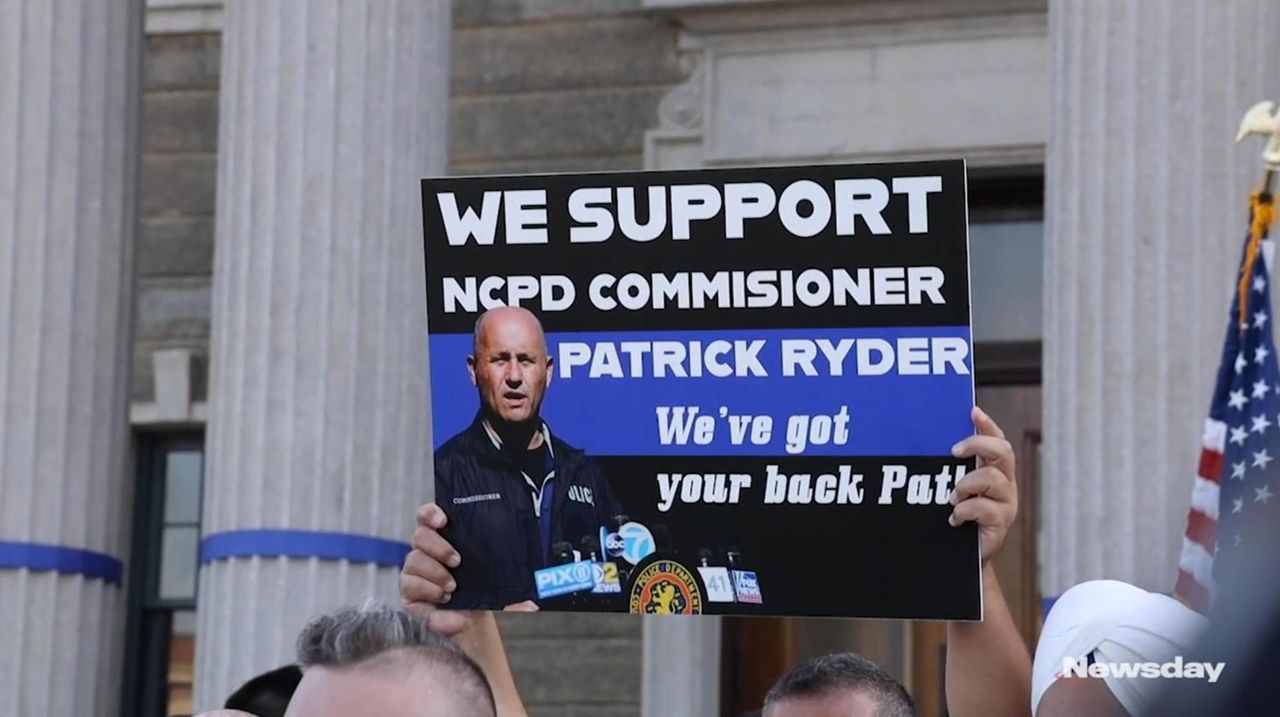 Nassau Police Commissioner Patrick Ryder has the "full confidence" of County Executive Laura Curran and will remain top cop despite calls from civil rights leaders for him to resign after telling Newsday the department's diversity attempts were thwarted because Blacks and Hispanics come from "broken homes."

"I have full confidence in Commissioner Ryder’s leadership of the Police Department, and he will be staying in his position," Curran said in a statement Monday afternoon. "Commissioner Ryder has championed the community policing model now being embraced nationwide as part of reform efforts.

"We will continue to focus on keeping Nassau safe while moving forward with police reform that builds trust between law enforcement and the communities they serve, including implementation of body cameras by the end of the year and a new committee to help diversify the Department," the statement said.

Curran's statement — her strongest public remarks yet in support of Ryder — came as a diverse group of about 200 community leaders, police unions and county lawmakers rallied in support of him at Nassau government headquarters in Mineola Monday evening.

Some held signs which said in capital letters "We got your back Pat!" with a black and blue background. Others held a photo of Ryder with a caption that said. "Thank you Police Commissioner Patrick J. Ryder."

The Rev. Dr. William Earl Thomas, a retired NYPD sergeant, and pastor of the Saint Johns Baptist Church in Lakeview, told the crowd that he talked to Ryder Sunday evening about the comments he made to Newsday.

"I’m 78 years old, a student of human behavior, there’s no community [that] does not have [a] broken home," Thomas said. "I don’t care if it’s Jewish, white, Black, brown, Indian. And so I don’t know if he said something wrong, really. However, I’m thankful for the 99 things I know he did right as a commissioner."

But an emotional Ryder on Friday, who teared up as he spoke about the ongoing controversy minutes after one of his sons was sworn in as a new Nassau police recruit, said he had no plans to resign.

Curran, despite warnings from some activists that they would continue to press for Ryder's resignation even as the Democrat runs for reelection this fall, has said she disagreed with his sentiments but nevertheless stands by him.

Curran also last month created a 10-member diversity committee to examine the police hiring process. The department's newest police class of 161 recruits, which was sworn in on Friday, was overwhelmingly white with just 12 Hispanics, five Asians and four Blacks.

Ryder spoke about diversity in the police department as part of a Newsday investigation published last month that showed only 36 Black police officers were hired from a pool of 2,508 Black applicants in the six years after a 2012 hiring test. Of 3,389 Hispanic applicants from the same test, 89 were hired.

Black and Hispanic candidates were eliminated from contention during the hiring process, which includes a physical fitness test and a background investigation, at higher rates than their white counterparts despite decades of U.S. Department of Justice monitoring. In Suffolk, there were 16 Black officers hired in the four years after a 2015 test.

Ryder, in an interview about police hiring, drew a parallel between the family life of racial minorities and their success at becoming police officers.

Ryder also suggested that Jews, Asians and Muslims preferred careers as lawyer and doctors — not as police officers.

"What’s the percentage of Asians that are in the doctor world? What is the percentage of lawyers that are Jewish? You know, these are real facts, real numbers, and they are high on both sides. I have great friends from the Muslim community. And I asked them why don’t you get your son to take the test? He said I want my son to be a doctor. I want my son, my daughter to be a doctor. OK, but respectfully, that’s their choice, not ours. So we lose those candidates."

Senior Pastor Arthur L. Mackey Jr. of the Roosevelt-based Mount Sinai Baptist Church Cathedral, said Curran should face rejection at the ballot box for her decision to stand by Ryder.

"I love … Commissioner Ryder," he said, adding that he's never met a police commissioner who was "more effective and more inclusive of all the communities."

At the Monday rally, Isma Chaudhry, past president of the Islamic Center of Long Island, said Ryder and the department had made sure demonstrations against hate crimes involving several different communities could go forward safely.

"At those rallies, we have all seen Nassau County, brave and blue, standing there ensuring that each one of us, as we are expressing ourselves, we are safe and we are heard and we are able to express ourselves in a safe environment and we thank them for that," she said. "And the individual who has trained Nassau County men and women in blue, [is] Commissioner Paddie Ryder."

NCPD top cop says he won't resignAn emotional Patrick Ryder said he won't resign after growing calls from community activists for him to step down for comments he made in Newsday blaming the so-called "broken homes" of Blacks and Hispanics for the lack of diversity in the police department. Some Hispanic leaders voice support for Nassau's top copA group of Hispanic community leaders on Friday spoke out in support of Nassau County Police Commissioner Patrick Ryder following calls from civil rights leaders and some police fraternal organizations for the commissioner to resign for comments he made about the department's lack of diversity that some deemed racist. Coalition calls for Nassau Police Commissioner Patrick Ryder to resignThe groups called for Ryder's exit over comments he made in a Newsday interview that linked the county's failure to hire more Black and Hispanic police officers to the prospective job candidates coming from "broken homes." Ryder apologizes as more condemn his comments to Newsday on hiring diversityThe Nassau police commissioner rebuffed calls for his resignation while apologizing for remarks that Long Island civil rights leaders said negatively stereotyped Black and Hispanic families.