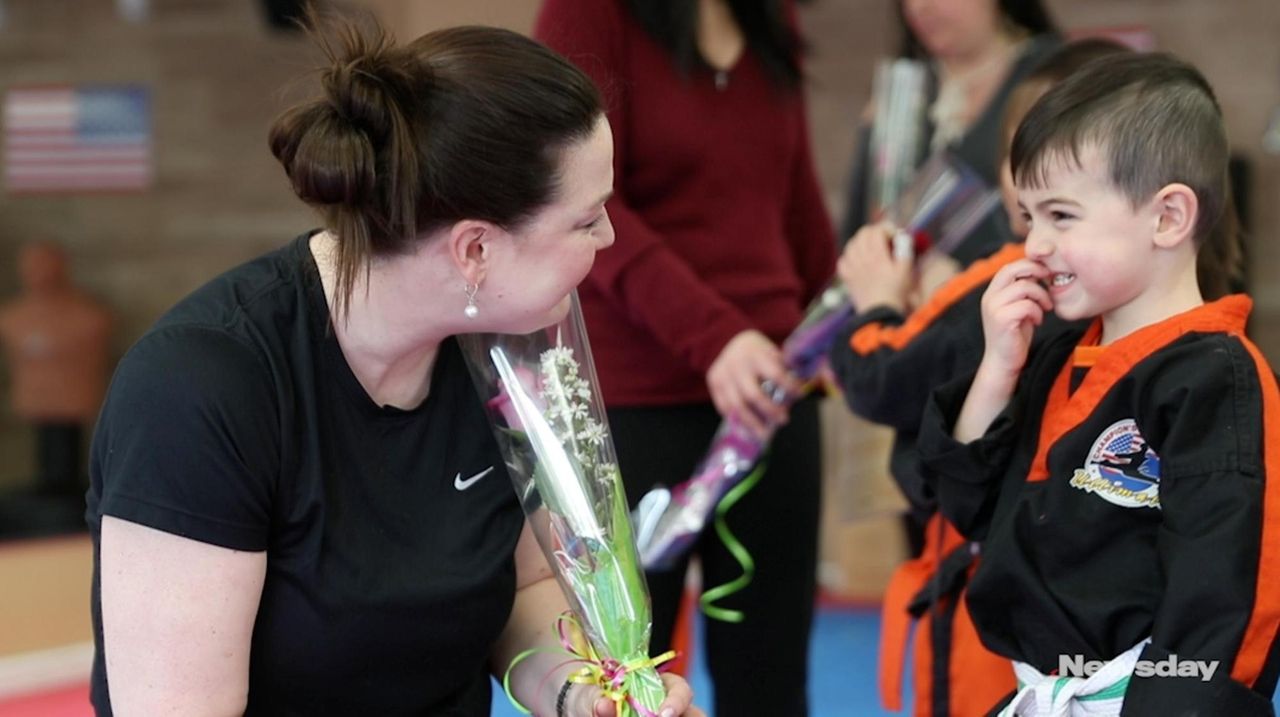 Today is the first day Melinda Constantine is able to participate in an outside activity with her son since his birth more than four years ago, after she recovered from a heart condition and hip surgery.  Credit: Michael Owens

Families across the nation will recognize their mothers on Sunday, thanking them for being phenomenal women and leaders in the household.

"I missed out on all that bonding time with him," said Constantine of Westbury. "I didn't feel close to him at all; he was closer to my husband. I felt inadequate, like I wasn't really a mom."

Constantine gave birth to her son, Lucas, 4, in December 2014. There was pure joy when Lucas was born "and then life changed," said Constantine's husband, Steve Constantine.

Melinda Constantine said she began coughing, feeling tired and looking pale in the months after Lucas' birth. She was admitted to Mount Sinai Hospital in Manhattan and eventually diagnosed with peripartum cardiomyopathy, a condition in which heart muscles weaken during the final months of pregnancy. The condition meant she needed a left ventricular assist device implanted that would operate as her heart at all times. The implant limited how much she could move and play with her growing son.

Somehow, while living with the device, Constantine's heart began recovering on its own.

Dr. Sean Pinney, Mount Sinai's director of heart failure and transplantation, said there is debate among his staff whether to keep Constantine on the device or take it out.

"I was concerned that, even though the heart was looking good, will it continue to look good if we took it out," Pinney said. "Why take that risk?"

The doctors compromised. They lowered the power on the device, giving Constantine's heart a chance to do more of the blood pumping. Her heart improved and surgeons took out the device in July 2017. Pinney said Constantine was one of the less than 5 percent of people who somehow recover from the condition.

Later that year, around Christmas, Constantine was cleared for physical activity. Then, on an ice skating trip with Lucas and Steve, she fell on the ice and broke her hip. She had hip surgery and was sidelined again for 18 months.

As fate would have it, Constantine's hip began feeling better this past week.

She spent Saturday in Wantagh with Lucas at his Taekwondo class. The mother and son practiced snap kicks and hammer punches together. They even broke a wooden board in half. It was the first time since Lucas was born that Constantine joined her son in physical activity.

Afterward, Constantine said Taekwondo felt great but made her tired.

"It's definitely a workout," she said. "Now I know what he goes through three times a week."

Dr. Pinney stopped by the class to see how Constantine was feeling. He said he remembered her condition with her weakened heart and to now see her kicking and punching alongside her son was nothing short of miraculous.

"It's a special gift for Mother's Day to be active with family and feeling good," he said.