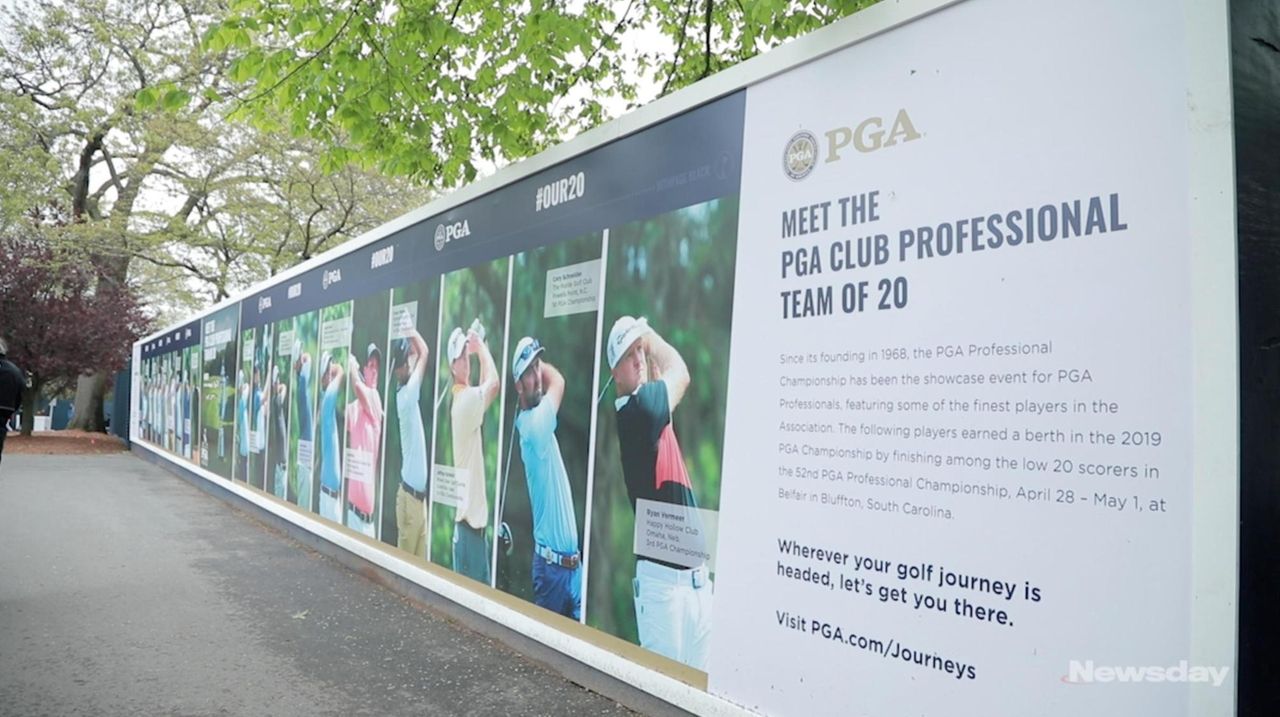 Transforming Bethpage Black from one of the region's busiest public golf courses into a glistening PGA Championship-ready facility requires years of planning and a crew of 160 groundskeepers working nearly around the clock.

Their names may not be as familiar as Tiger or Phil, but their work — a magnificent 7,459-yard course often ranked as one of the toughest in the nation — will be showcased to a global television audience this week and an estimated crowd of 200,000 fans expected at Bethpage State Park.

"Our number one aim is not to get in the way of the best players," Haigh said at a news conference Tuesday. "Let them showcase their skills. Make it tough. Make it fair. Make it challenging. Hopefully, at times, make it exciting."

The challenges for the greens maintenance crew at Bethpage are daunting.

The Black was the first  public course to host a major championship  — the 2002 U.S. Open — but the greens, fairways and 8 acres of sand traps often wear down from hosting an estimated 45,000 rounds per year. The course, which reopened for the season April 13, closed to the public two weeks later in preparation for the tournament.

Then there's size. The Black is one of five 18-hole courses at Bethpage State Park, making it the largest public golf facility in the country.

And of course there's the weather. Two days of soaking rain have created less than ideal conditions for the world's top players.

"There are things we can do to manage Mother Nature," said Andrew Wilson, the course's superintendent and director of agronomy. "But if she wants to win, she's winning … We need to do our best and just hope we can put on a good show."

The job of beautifying and maintaining the Black Course this week falls to a crew of 60 state Parks Department workers and 100 volunteers  who have traveled to Farmingdale from across the country and throughout the globe.

The volunteers, who work on the grounds of their hometown golf courses, come to Bethpage looking for the experience and networking associated with working a major tournament, Wilson said.

Most volunteers pay their own travel — the state provides lodging at Farmingdale State College — and they'll generally work 8 to 10 hour per day starting at 4 a.m.

"It's the experience of working one of the greatest courses you could possibly work at," said Harry Jones, the head greenskeeper at Wrekin Golf Club in England. "It's a privilege to learn from the best. Everyone back home is very jealous."

Johnny Ryan, an irrigation specialist at the Fota Island Golf Resort in Ireland, said Bethpage is known worldwide. "This is a dream come true," he said.

Wilson's team has spent months preparing for the PGA Championship by rebuilding bunkers, seeding, sodding, trimming the rough and repairing equipment. The grass gets mowed daily. Divots are immediately repaired. Even the cups on the greens get replaced at the end of every day.

"It's not just about the grass," Wilson said. "It's about the production of the tournament."

The work is anything but simple. For example, the greens must be cut to just under a tenth of an inch — about the size of two dimes stacked on top of one another, Wilson said. Cut the greens unevenly and the ball won't roll smoothly.

"We are trying to turn a living grass surface into something that rolls like a pool table," said Wilson, adding that the goal is to keep the greens firm and fast by providing them with just the right amount of moisture and aeration.

Sand in Bethpage's steep bunkers also needs to be tightly compressed so the ball rolls down to the flat part of the green. Bethpage regulars are familiar with softer bunkers where the sand splatters like a "fried egg" upon contact, Wilson said.

For Bethpage's greens crew the hours are long; the work grueling and the crew largely anonymous to the public. But Wilson says it's all worth it as long as the course shines as the tournament's unspoken star.

"When you go to the movies the spectators are there to see the stars," Wilson said. "We are the guys in the credits. Our job is essential to the production. And that's what we are trying to be."

Duval sings the praises of Bethpage Black ahead of PGADavid Duval returns to Bethpage Black this week, not as a competitor but as a ... Russo reunites with Tiger, hasn't spoken with FrancesaChris "Mad Dog" Russo often is asked about the potential for a reunion with a ... PGA crowds come at a cost for nearby residentsFor residents living nearby, the tournament can be either an exciting opportunity to rub elbows with golf's elite or a major annoyance for those who cherish the tranquility of quiet suburbia.

1:45
Forecast: Up to 17 inches of snow expected as massive storm moves in
2:20
Governor extends mask mandate for indoor public places to Feb. 10
Oyster Bay's computer outage prompts state review of town's IT security
1:51
How race is taught in LI schools — and why some educators feel under siege
1:47
Portrait of LI airline pilot lands at Smithsonian
Winter storm warning issued, more than a foot of snow possible
Didn’t find what you were looking for?