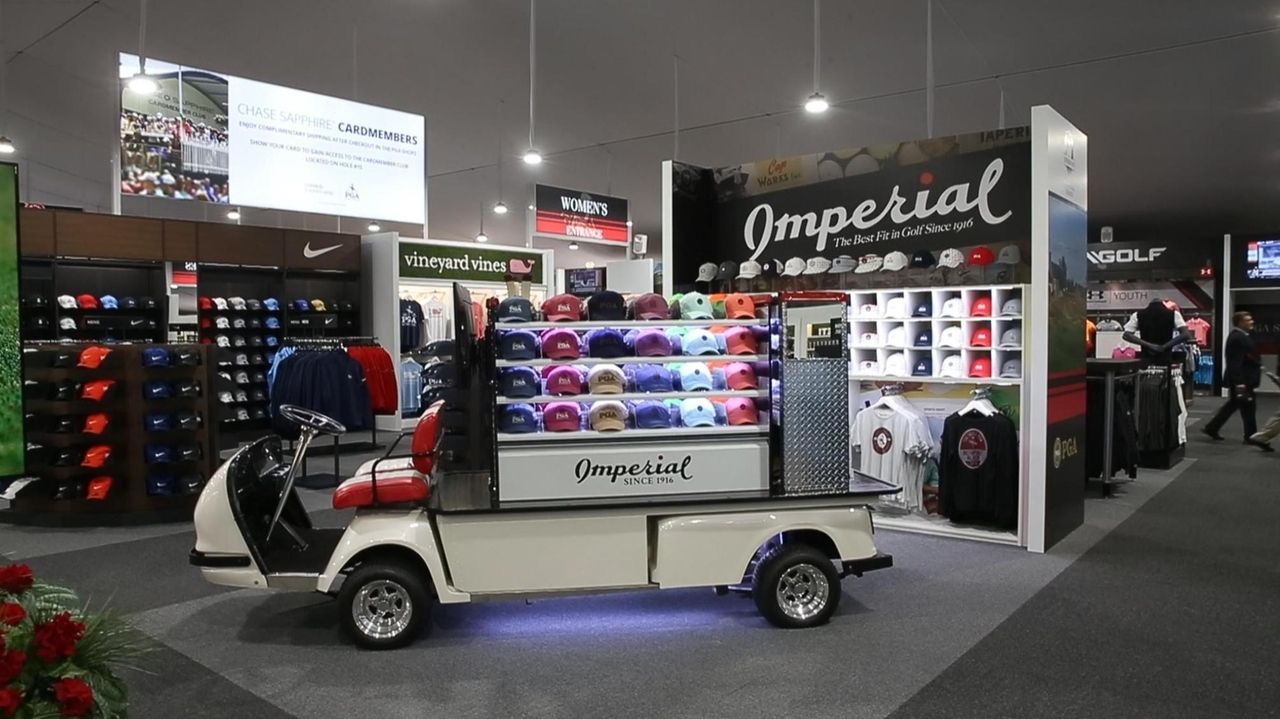 Long Islanders may not be able to swing a five iron with Tiger Woods at next week’s PGA Championship at Bethpage Black but they can still bring home a piece of the action. The 60,000-square-foot PGA Shops merchandising tent at Bethpage State Park will open to the public on Friday — a retail haven for fans eager to take home tournament-branded items ranging from golf shirts and hats to signature golf balls and shot glasses. We got a behind-the-scenes tour on Wednesday Credit: Anthony J. Causi

Long Islanders may not be able to swing a five iron with Tiger Woods at next week’s PGA Championship at Bethpage Black but they can still bring home a piece of the action.

The 60,000-square-foot PGA Shops merchandising tent at Bethpage State Park will open to the public on Friday — a retail haven for fans eager to take home tournament-branded items ranging from golf shirts and hats to signature golf balls and shot glasses.

“They’ve never seen anything like this in retail or any sporting event they’ve been to,” said Michael Quirk Jr., senior director of merchandising and licensing for the PGA, as he took Newsday on a tour Wednesday of the facility. “And it’s one of the best product offerings you’ve ever seen.”

The massive tent, built up over the span of six weeks on a grassy patch south of the main clubhouse and adjacent to the practice range, is designed to be an immersive experience for deal hungry links-fans and curious spectators hoping for an Instagram-worthy selfie.

The facility is operated by a crew of 850 merchandise volunteers, many from Long Island, who work four five-hour shifts in exchange for a nominal fee, access to the tournament, product gear and meals. The store’s 50 cash registers will also be staffed by an all-volunteer crew.

“At the end of the day it’s a major championship and fans can expect to see the greatest players in the world,” said PGA Championship director Scott Reid. “We are trying to create an atmosphere that’s fun and safe for the New York fans to embrace.”

And then there’s the Tiger factor.

Fresh off his historic win at the Masters last month at Augusta — his first victory in a major since 2008 — the world’s most famous golfer will return to Bethpage Black, where he won the U.S. Open in 2002.

“We will sell more merchandise when there’s more people and Tiger draws more people,” Quirk said. “When Tiger is doing well golf is doing better than it was before that.”

Spectators walking through the front door of the Shops are met by product-designed areas with relatively little connection to putters and pitching wedges.

Cadillac is displaying a pair of XT4 vehicles; Polo has a branded booth to personalize your gear; and Omega, the luxury watch company, has a lunar rover that has rolled along the moon. A total of 15 high definition TVs are scattered throughout the Shops and a DJ will be spinning music to keep the crowds entertained, Quirk said.

And from Friday through Sunday spectators will have an opportunity to take a picture with both the Wanamaker Trophy — awarded to the PGA Championship winner — and the Ryder Cup trophy. The Ryder Cup — a competition between teams from Europe and the United States — comes to Bethpage in 2024.

“The Shops are 75 percent retail and 25 percent experience,” Quirk said. “For us it’s not just come in and buy something. It’s the experience. We’ve tried to merge those two together so people can enjoy this all at once.”

Altogether, Quirk said, the Shops has more than 1,000 championship logo items for sale from familiar names such as Nike, Ralph Lauren, Adidas, Under Armour, New Era and 47 Brand. More than two thirds of the items, he said, will be sold during the tournament days from Thursday through Sunday.

Among the top sellers are gear worn by the players, including Woods’ signature Sunday mock neck Nike Polo. “This is what the players are actually wearing during the event,” Quirk said.

T-shirts, including those with the iconic warning signs advising unfamiliar golfers to avoid playing the Black course, will set you back around $30. Other shirts feature familiar images of the Long Island or New York landscape or are branded with the Yankees or Mets logos.

Customers will be able to pick up a lithograph of the commemorative PGA Championship painting by Bohemia artist Elaine Faith Thompson.

For those just looking for a souvenir to commemorate the tournament, the Shops sells coffee mugs, water bottles, flags, chairs, books and golf signs featuring familiar slogans such as “Quiet Please.”

Once they’re done shopping, customers can check their merchandise for free or ship it via UPS.

And while the PGA does not provide estimates for expected crowds or revenue, tournament officials are expecting brisk business.

“With this being a major we expect major crowds to walk through it,” Quirk said. “It’s our first time at Bethpage and with Tiger coming off a win at the Masters we are expecting a great week.”

How to get tickets to the PGA Championship at Bethpage Black

Daily grounds passes for the practice rounds Monday, Tuesday and Wednesday and for the championship rounds Thursday and Friday are available on a first come, first served basis, while supplies last, at the admissions office near the main spectator entrance at Bethpage State Park. The practice round tickets are $40 each while tickets for the first two rounds are $120 each.

The PGA of America offers free access to juniors ages 17 and under Monday through Sunday as long as they attend with a ticketed adult. Each ticketed adult can bring up to four juniors for free each day. Active duty U.S. military personnel, military retirees, active reserve, and National Guard are eligible for free daily grounds tickets Monday through Sunday by presenting their military identification at the admissions office. Each eligible person can be accompanied by one guest.

Tickets for the championship rounds on Saturday and Sunday are otherwise sold out.