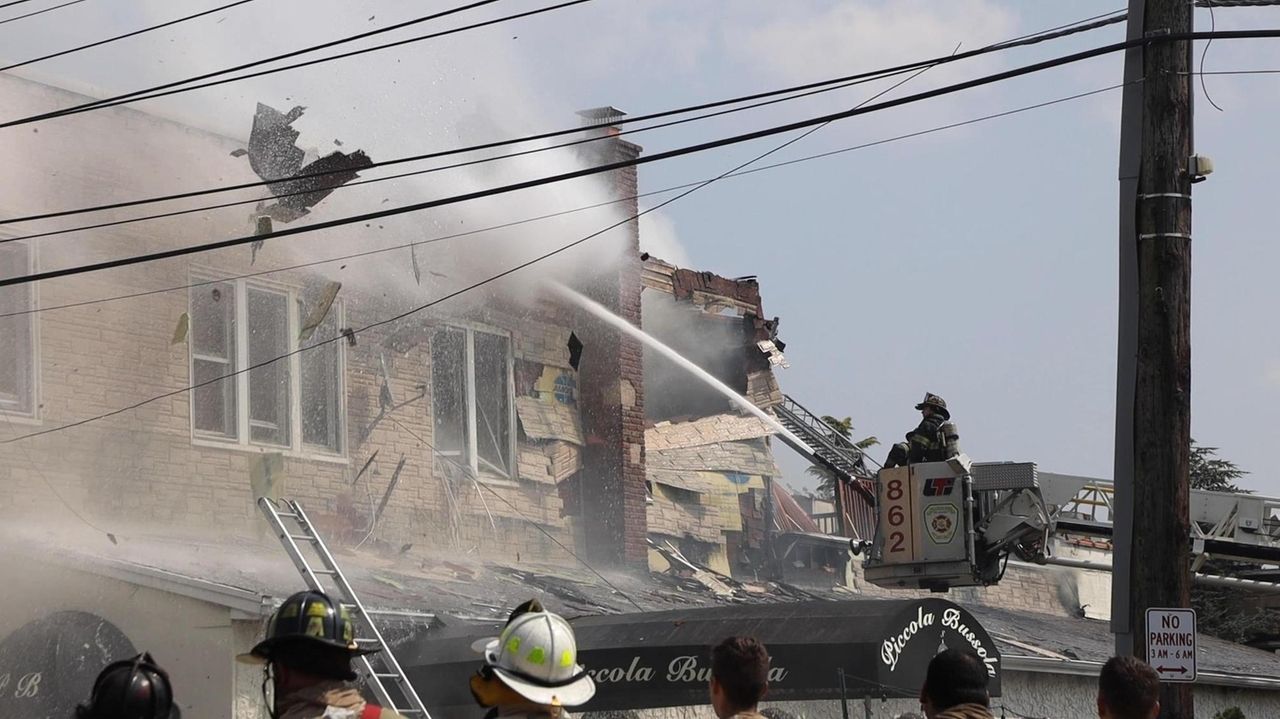 Piccola Bussola, an Italian restaurant in Mineola, caught fire Thursday afternoon along with four apartments on the second floor of the building, officials said. Tony Lubrano, the restaurant and property owner, said all of the apartment residents, including four young children, escaped the building without injury. Credit: Newsday / Cecilia Dowd; Howard Schnapp

A fire tore through Piccola Bussola, an Italian restaurant in Mineola, Thursday afternoon along with four apartments on the second floor of the building, officials said.

Tony Lubrano, the restaurant and property owner, said all of the apartment residents, including three young children, escaped the building without injury.

The fire was reported at 12:44 p.m. at 159 Jericho Turnpike and declared to be extinguished at about 8 p.m., Nassau County police said.

Lubrano, of Plainview, said he was on his way to the Piccola Bussola, one of three restaurants of the same name that he co-owns with his  three brothers, to hang some pictures on the wall after the building was gutted and renovated during the coronavirus pandemic.

"This is a nightmare. This is my life," Lubrano said. "I've been here 17 years in this location running this restaurant. I am afraid to even look inside and see what's left."

Strauss, a volunteer firefighter, said the blaze appears to have originated on the ceiling of the first floor in the rear of the building. The intensity of the blaze, he said, was amplified by high winds, which spread the fire to a neighboring retail store, he said.

Members of the Mineola Fire Department, which is located nearby, quickly responded to the scene along with more than nine other departments, Strauss said. The restaurant, he said, was unoccupied while six adults and one child in the four apartments escaped without injury.

"It’s pretty much burned out," Strauss said of the building. "Probably on the first floor of the restaurant … some parts of it could be salvageable … But the second floor obviously is severely damaged."

The cause of the fire has not yet been determined, Strauss said.

Lubrano, the second-generation restaurant owner, breathed a sigh of relief when told that the building's occupants had escaped without injury.

"As painful as it is, the building can be repaired," he said. "There are three little boys living in one of those apartments. That's what was scaring me the most."

Barry Daras of Mineola said the fire was a tragedy for the community.

"This is terrible for the neighborhood," said Daras, who was biking past the restaurant Thursday at the time of the fire. "Of all times during the pandemic. Business is so bad to begin with. And now this is happening. It's terrible and heartbreaking."

Jericho Turnpike, from Mineola Boulevard to Nassau Boulevard, was closed in both directions as was Willis Avenue from Jericho Turnpike to Washington Avenue, authorities said.

The Red Cross was on the scene offering temporary housing, food, clothing and other emergency needs to the fire victims.