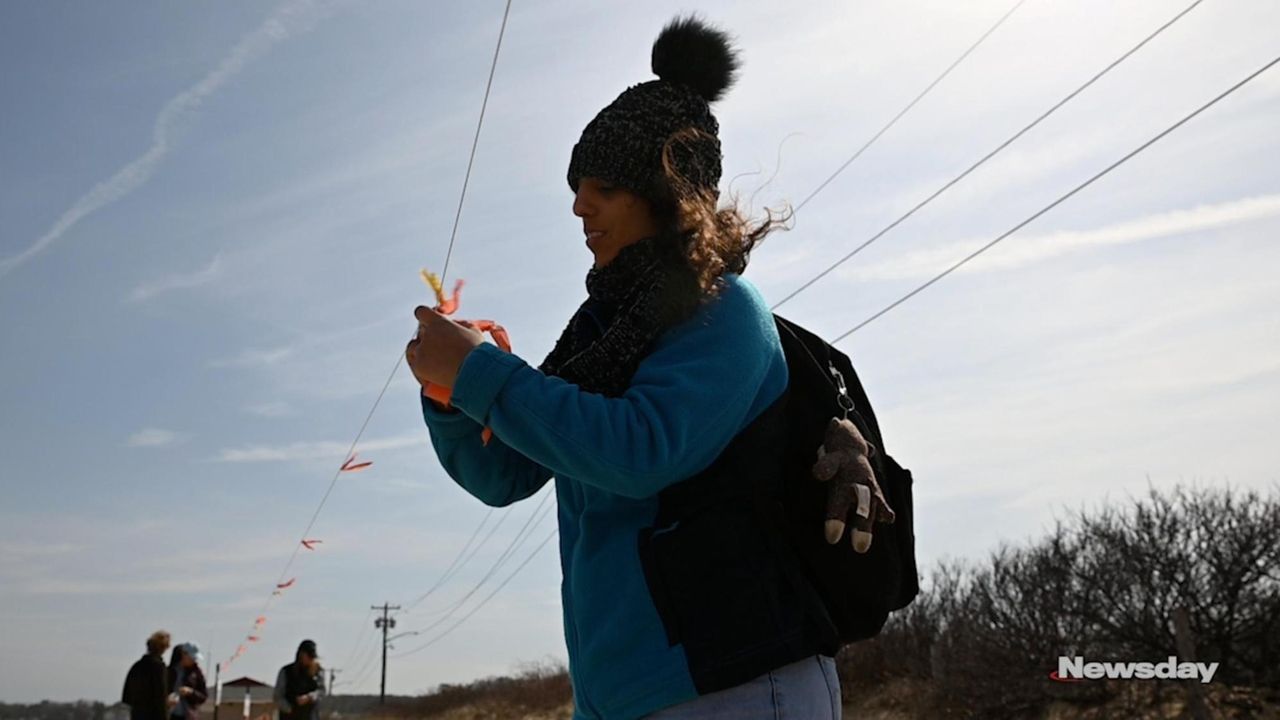 Temporary fences to keep the midget migratory bird species of least terns and piping plovers from dying out are going up on Long Island beaches, including Bayview's Stehli Beach, where volunteers joined conservation workers Saturday morning on a cold and blustery North Shore to help protect them.

The sun birds are returning from the warm, southern climes of the Gulf Coast and sometimes farther south, where they winter. One piping plover has already been spotted in the Town of Hempstead.

“This is their home. We don’t depend on it. This is the only place they can live,” said Amanda Pachomski, Audubon New York’s Long Island bird conservation manager. She instructed volunteers in fence-pounding, stringing string, and attaching orange tape and signs that were official or contributed by local students.

Piping plovers, least terns and other species, almost driven to extinction decades ago by hunters and hatmakers, are now imperiled by waterfront development, nest-trampling beachgoers and 4x4 drivers, and off-leash dogs and other predators.

Only the area closest to the parking lot was roped off, for about half the length of the beach, though the birds will have to leave the protected area to forage by and in the water.

“I think there’s plenty of opportunity to balance recreation and conservation,” Pachomski said.

Both species of bird can live about two decades and are devoted parents, nesting on flat beaches, of which Long Island has an abundance, experts said.

Bayville was one of dozens of Long Island sites, including the Town of Huntington's Eatons Neck, where the fencing is going up.

“I hope it’ll be effective,” said Summer Hornbostel, 19, a Long Island native and freshman at Middlebury College in Vermont.

New York State lists plovers as “endangered” or in imminent danger of extinction. Least terns, it says, are “threatened,” which means they probably will become endangered in the foreseeable future.

Adult plovers, often likened to cotton balls with bright orange legs, weigh about 2 ounces and are only around 6 inches long. They consume beetles, worms, crustaceans and the like. Their young open their eyes shortly after they hatch and can also forage, though their parents must protect them from all danger.

“They are really standout, fearless parents,” Pachomski said. Sometimes, like a few other bird species, a parent will pretend it has a broken wing to lead predators away.

Yvette Reyes, 47, of Stony Brook, came with her daughter, Olivia, 12, who hopes to complete 120 hours of service to her community, with a focus on Mother Nature. "Olivia likes to do her environmental hours," Reyes said.

Last year, Long Island had 386 pairs of plovers, the state Department of Conservation said, citing preliminary data. That is down slightly from 392 in 2017, though the count has risen fairly steadily from 286 in in 2014.

Estimates of Long Island’s colonies of least terns were not available.

They are the tiniest American tern, about half the weight of a plover but slightly longer, around 9 inches. These gray fish-eaters, with yellow feet and bills, also emit what the Department of Environmental Conservation describes as a sharp, penetrating call, “kip-kip-kip” or "zreep."

“They are kind of serious … They dive bomb,” Serbin said.