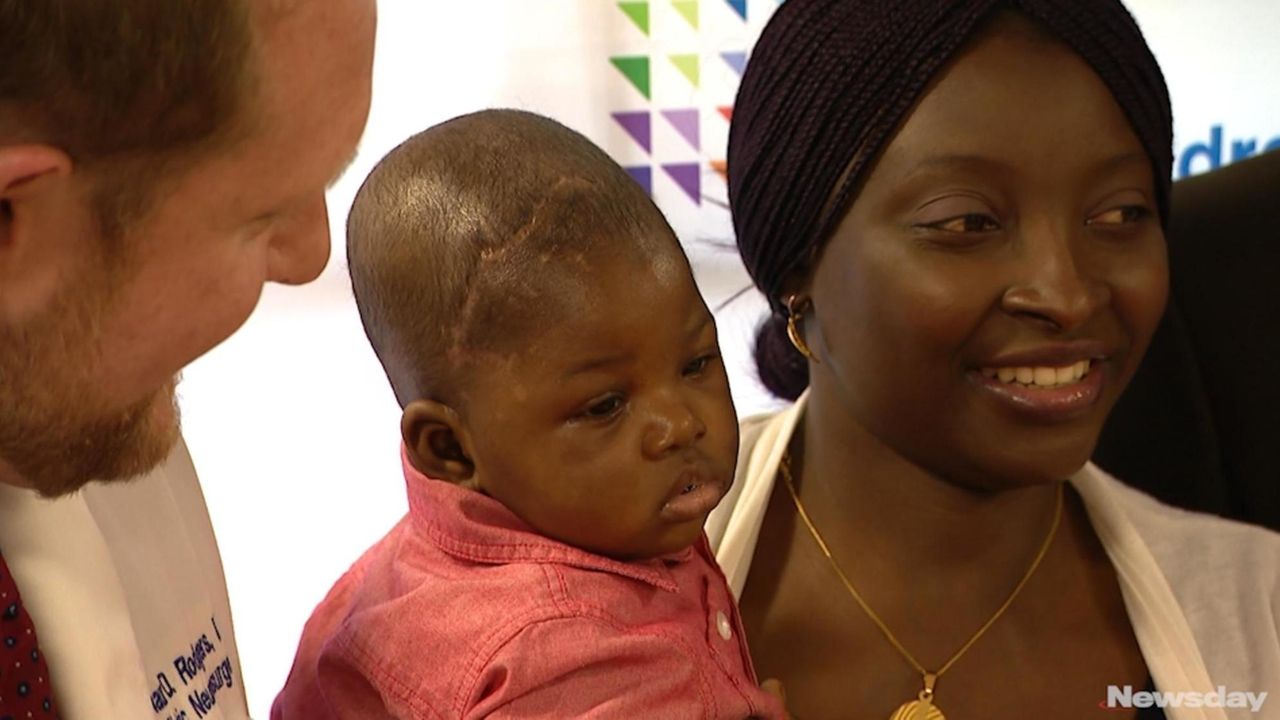 On Friday, May 11, 2018, 4-month-old Nathan, his parents and two sisters returned to Cohen Children’s Medical Center in New Hyde Park to thank the team of doctors who saved the infant’s life after a pitbull attack in March.  Credit: News 12 Long Island

Four-month-old Nathan, his parents and two sisters returned to Cohen Children’s Medical Center on Friday to thank the doctors who saved the infant’s life after a pit bull attack in March.

The family, residents of Elmont, expressed gratitude during a news briefing at the New Hyde Park facility as doctors described cranial and brain injuries they said resembled war wounds.

The baby’s survival was defined as a medical miracle aided by the skills of trauma specialist Dr. Jose Prince and pediatric neurosurgeon Dr. Shaun Rodgers.

“I am so happy; very grateful,” said Susan Na’anmiap, referring to her son’s recovery. She also was attacked and suffered leg injuries. Na’anmiap was treated at nearby Long Island Jewish Medical Center, which like Cohen Children’s, is a division of the Northwell Health system.

She recalled the March 8 attack as a day of horror: “When the ambulance came I said: ‘I can’t leave my baby.’ I was shouting and screaming.”

Hyacienth Na’anmiap, the baby’s dad, and an employee of New York City’s Department of Citywide Services, said he was happy the worst had passed. He learned of the horrific injuries after his tiny son was already in surgery fighting for his life, he said.

Nathan’s parents, both Nigerian immigrants, said they would always be indebted to their Northwell doctors.

The baby’s survival is the second neurosurgical rescue reported at a Northwell facility this month. Last week, a 29-year-old man who had a half-dozen aneurysms thanked his doctors at Long Island Jewish Valley Stream for saving his life.

The pit bull attack occurred after Susan Na’anmiap knocked on her landlady’s door.

When it opened, the dog rushed out, attacking her and Nathan, who was in a baby carrier. The dog grabbed the infant’s head in its jaws, biting Nathan so viciously that a portion of his brain oozed from his skull, doctors said Friday.

Trauma specialist Prince said the degree, depth and force of the injuries were uncommon in a child that young.

“Whenever you see brain [tissue] come out, basically, that’s lost,” Prince said, adding that, as with a heart attack in adults, every minute counts.

Rodgers described the most serious injuries to the baby’s frontal lobe, the largest of the four major lobes of the brain’s cerebral cortex. That region is the seat of what the neurosurgeon called all higher executive functions — memory, thought, language, cognition and consciousness.

As Rodgers spoke, the baby gurgled and giggled, interacting with his sisters Sharon, 10, and Rahab, 6. Those cues are signs Nathan is meeting his developmental milestones, Rodgers said.

Despite that note of optimism, Rodgers, who described the injuries as equivalent to military wounds, also acknowledged it would take years to determine how well the child fared neurologically. Nathan will be routinely monitored, he said.

“At this age the brain has a lot of plasticity,” Rodgers added, referring to its capacity to be adaptive throughout life.

Rodgers said the surgical team at first thought they were dealing with an attempted homicide because the damage was so vicious. Nathan’s surgery consumed five hours and involved the expertise of a large team of Northwell doctors.

“He had a tremendous amount of care from our neurologist and infectious disease doctors,” Rodgers said.

Dogs that attacked mom and baby to be euthanizedStruggling to hold back tears, the owner of two pitbulls that attacked a mother and infant boy, inflicting serious facial injuries to the child, agreed in court to euthanize both dogs.