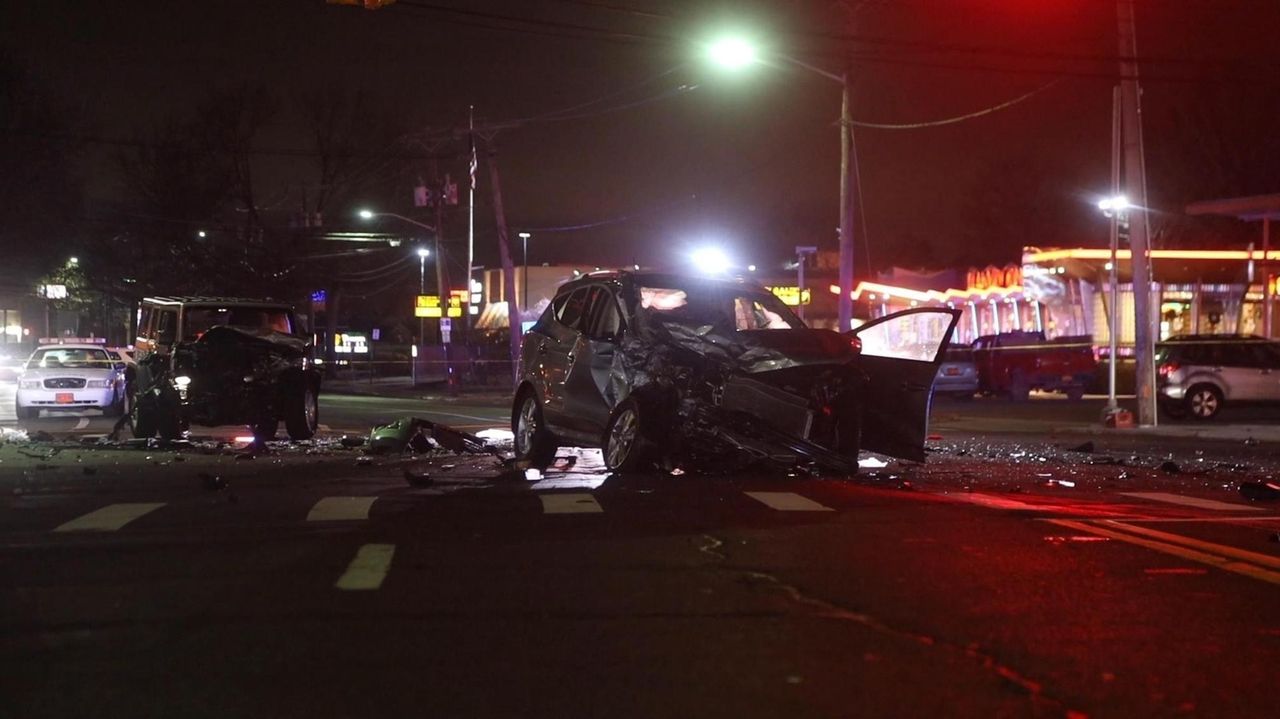 Four cars collided in Plainview around 7 p.m. Thursday. One of the cars was carrying a 17-year-old with a gunshot wound, according to police. Credit: Howard Schnapp

A 25-year-old man accidentally shot a 17-year-old boy in the neck Thursday night while cleaning a handgun inside a Plainview home and got into a four-vehicle crash as he drove the wounded teen to a hospital, Nassau police said.

The shooting victim was listed in serious but stable condition at a hospital and is expected to survive, police said.

Officer Eric Evensen, a Nassau police spokesman, said Friday in a news release that the man, Brian Gregg of Plainview, was not a legally licensed handgun owner and is being charged with criminal possession of a weapon in the fourth degree. (A prior release sent Thursday night said the handgun was licensed.)

An off-duty Nassau police officer whose shift had recently ended was driving one of the four vehicles involved in the crash, said Det. Lt. Richard LeBrun, a spokesman for the Nassau police department. The officer, who has been on the force for about two and a half years, provided medical aid despite a head injury, and she contained the scene until first responders arrived, LeBrun said.

At the time of the crash, Gregg was driving the wounded teen to a hospital, LeBrun said. The SUV was traveling north on Plainview Road and attempting to make a left onto Old Country Road when it collided with another SUV going east, LeBrun said.

Two cars were struck and the officer, as well as three others, were hospitalized with injuries not considered life threatening, he said. The shooting victim is a friend of Gregg's 17-year-old stepbrother, who was also in the SUV, police said.

The shooting, which police believe was accidental, occurred at 7 p.m. Thursday, police said.

At the scene late Thursday night, the four vehicles remained in the intersection and debris from the wreck littered nearby streets. Both roads remained partially closed in each direction just after 11 p.m.

The roads have since been reopened.

LeBrun praised the officer for helping others at the scene despite suffering a head injury when her vehicle's air bag deployed.

"It's pretty amazing," LeBrun said. "Her training just kicked in even though she was injured. She administered aid to the other people. She called 911. She secured the scene. She made sure that everybody was cared for and nobody left the scene until police officers arrived."

Lorenzo Martinez, 19, of Bethpage, said he was working at La Piazza in the nearby Crossroads Plaza strip mall when he heard a "very loud bang."

Two of his co-workers then went outside and minutes later returned and told him they were trying to help those in the crash.

Gregg will be arraigned as soon as is "medically practical," Evensen said. It was not clear if he was represented by an attorney.