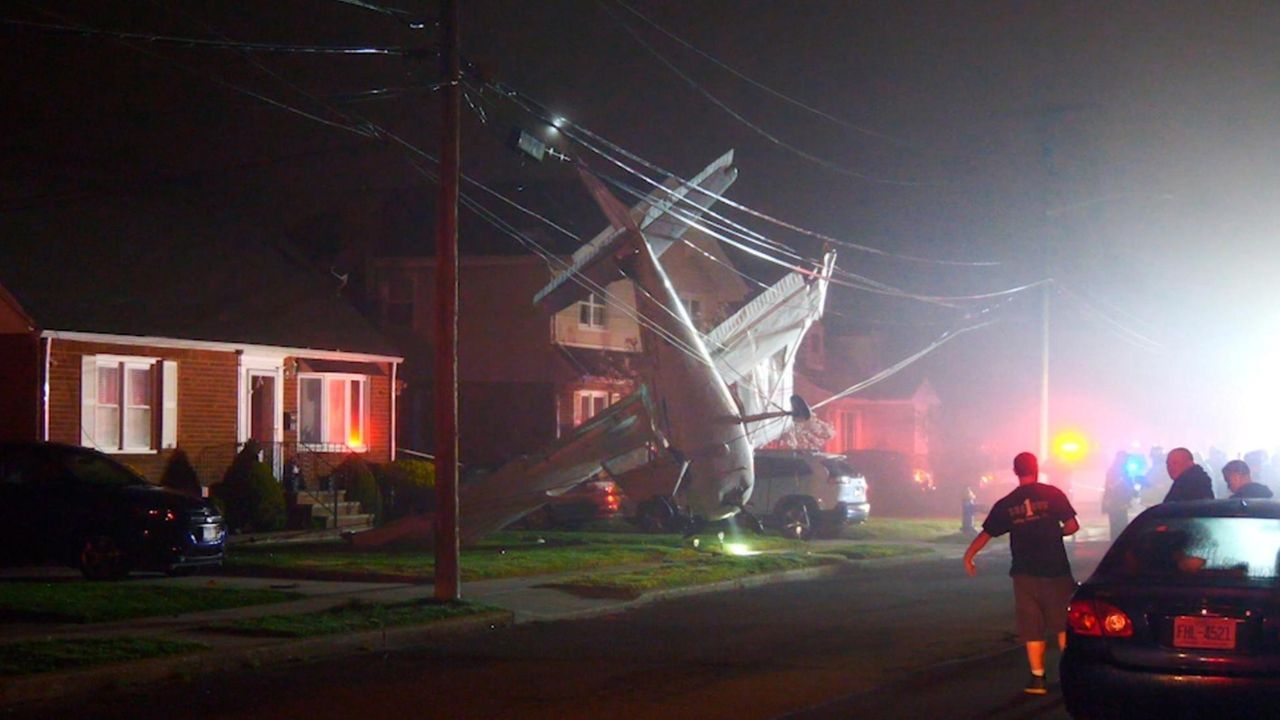 A single-engine plane crashed into a Valley Stream neighborhood Sunday night after it ran out of fuel and clipped a church before getting tangled in power lines and coming to a stop just feet from a home's front door, officials said.  Credit: Jim Staubitser

This story was reported by Rachelle Blidner, Robert Brodsky, Stefanie Dazio, Deon J. Hampton and Chau Lam. It was written by Brodsky.

Karen Gustav had just settled in to watch TV when she heard a loud noise. Everything went dark.

A plane had dropped from the sky onto her street in Valley Stream.

Gustav went outside to find out what was going on. So did others in her Valley Stream neighborhood.

At first, she thought a car had run into a pole. Then, she saw the plane — and three men who she described as looking “dazed” and “stunned.”

“They were just saying ‘We need water,’ ” Gustav recalled Monday.

The men had been onboard the rented single-engine Cessna, which crashed after running out of fuel Sunday night.

All the men walked away virtually unscathed. No one on the ground was hurt either, even though the plane came to rest just feet from a home after clipping a church and getting tangled in power lines.

“I’m just so glad nobody’s been hurt," neighbor Cat Andrews said right after the crash. "What’s the odds, a plane comes down on a residential street … and nobody’s hurt … so lucky."

With a wheel caught on sagging power lines, the plane rested at an extreme angle for hours overnight. By Monday evening, the plane had been removed the yard of the house on Clarendon Drive.

Like Gustav, Kenneeda Taylor-Sidberry  lives on Clarendon Drive not far from where the plane went down. The time was shortly after 10 p.m.

“It was a loud boom. Then all the power went off,” Taylor-Sidberry said. “Everyone opened their doors to see what was going on. Then people started yelling that a plane crashed. And then we came over and just saw the plane hanging here.”

She saw the three men sitting on the curb across the street from where the plane came down.

“I think they were in shock, really,” said Taylor-Sidberry.

Monday morning, she was still marveling that no one had been hurt.

“Nobody on the ground was hurt. The three people, they walked away,” Taylor-Sidberry said. “Thank God for that.”

The men all are from South Korea, authorities said. The pilot, Dongil Kim, 27, moved to the United States from South Korea and is living in Flushing, Queens. The passengers — Hongjoo Na, 29, and Jumwoo Jung, 26 — were visiting from South Korea, officials said. None of the men could be reached for comment Monday.

Kim had flown Na and Jung from Republic Airport, where he rented the plane, upstate to Niagara and was returning to the airport, said Patrick Ryder, Nassau County’s police commissioner.

The Cessna clipped the roof of Hillside Avenue's Revival Outreach Ministries and glided into power lines above the front yard of the home a block away on Clarendon Drive, officials said.

The National Transportation Safety Board and the Federal Aviation Administration are working together to investigate the crash, said NTSB spokesman Keith Holloway. NTSB isn’t sending an investigator to the crash site, he said.

Investigators will examine air traffic control and radar communication, the plane's mechanical and safety records, the pilot's flying and medical history and the weather at the time of the crash, Holloway said.

FAA records show that Kim has had a commercial pilot's license since 2013 and that the Cessna, manufactured in 1977, had an up-to-date airworthiness certificate.

The plane, with the tail number N5296H, is owned by Robert Corona of West Babylon records show. Corona rents the plane to the Danny Waizman Flight School and Aircraft Rental at Republic Airport in East Farmingdale, confirmed a person who answered the phone at Corona’s office.

The National Weather Service had issued a dense fog advisory at the time of the crash. Visibility was a quarter of a mile at Republic and an eighth of a mile at Kennedy. Fog is considered dense when it results in quarter-mile visibility or less, said Faye Morrone, a weather service meteorologist in Upton.

The NTSB will issue a preliminary report in seven to 10 days and a full report in 12 to 18 months, Holloway said.

Correction: The names of the three onboard — Dongil Kim, Hongjoo Na and Jumwoo Jung — were misspelled in an earlier version of this story.

Officials: Small plane down, none hurt on groundA single-engine plane flying in thick fog with a disoriented pilot ran out of fuel and clipped the roof of a church in Valley Stream before getting tangled in power lines and ending up suspended above a home's front yard, officials said.

1:45
Forecast: Up to 17 inches of snow expected as massive storm moves in
2:20
Governor extends mask mandate for indoor public places to Feb. 10
Oyster Bay's computer outage prompts state review of town's IT security
1:51
How race is taught in LI schools — and why some educators feel under siege
1:47
Portrait of LI airline pilot lands at Smithsonian
Winter storm warning issued, more than a foot of snow possible
Didn’t find what you were looking for?