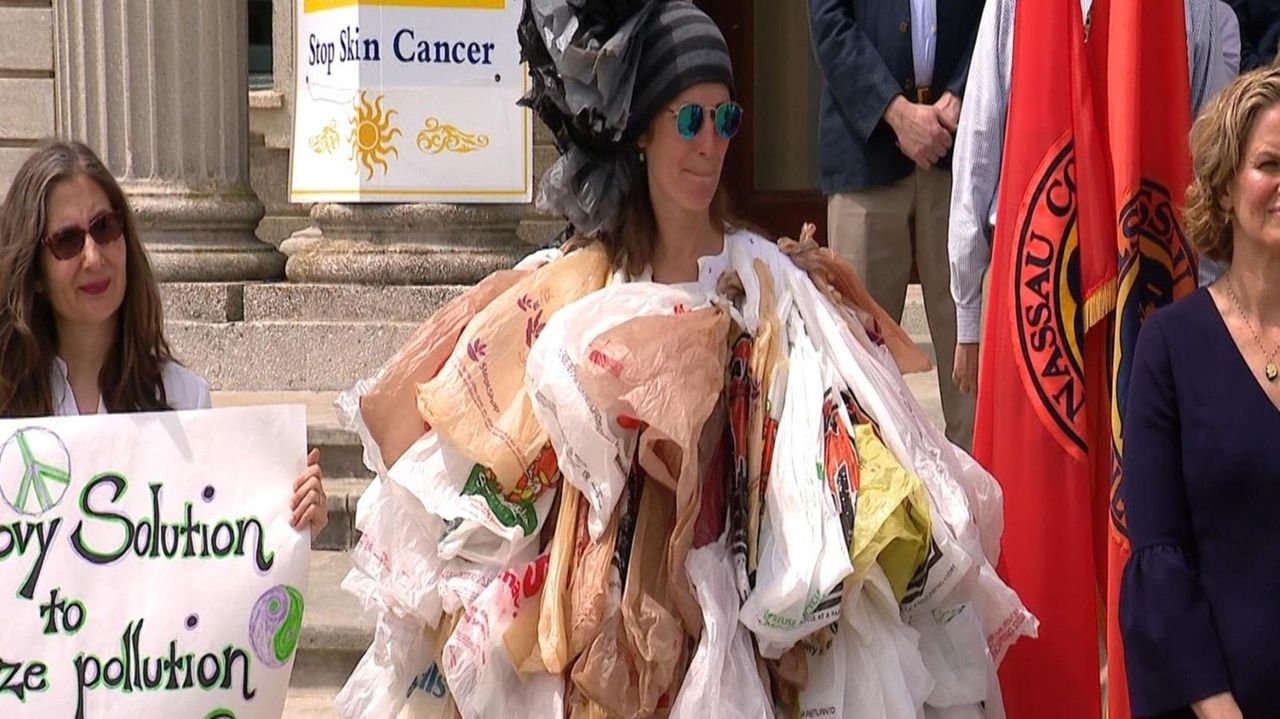 Disposable plastic and paper shopping bags would be subject to a minimum 5-cent fee at checkout under a bill filed Monday by minority Democratic lawmakers and backed by Nassau County Executive Laura Curran.

Presiding Officer Richard Nicolello (R-New Hyde Park) criticized the proposal as a “burden on taxpayers.” He also said he wanted to await the outcome of a move by Gov. Andrew M. Cuomo ban single-use plastic bags statewide. However, majority Republicans in the state Senate oppose the legislation.

The Nassau bill, sponsored by Legis. Debra Mulé (D-Freeport), targets the single-use bags in an effort to encourage shoppers to bring reusable bags to stores.

“We have a chance now to begin to reduce the amount of garbage going into the ocean,” Curran, a Democrat, said at a news conference on the steps of the county’s legislative and executive building on Franklin Avenue. “I fully support this legislation, and I look forward to its passage here in Nassau County.”

Nicolello said in a statement, “We are reluctant to add another burden on our taxpayers. Therefore, we will not take any action on the Democrat Caucus’ proposal at this time.”

The Nassau proposal mimics a law in Suffolk, along with bag fee mandates in Long Beach and the Village of Sea Cliff. Suffolk’s fee took effect Jan. 1.

Municipal leaders and environmentalists say that plastic bags pollute local waterways, endanger wildlife that mistake them for food, and get stuck in trees.

Adrienne Esposito, executive director of the nonprofit Citizens Campaign for the Environment, based in Farmingdale, said the Democrats’ bill would create a “unified policy on disposable bags” across Long Island.

At a news conference, environmentalists held signs, and one woman wore a dress sewn from 500 plastic shopping bags. “Groovy Solution to Minimize Pollution? Bring your own Bag,” one sign read.

But Senate GOP spokesman Scott Reif said in a statement on Monday, “while we support efforts to protect the environment, hardworking middle-class families pay enough taxes and fees already.”

Mulé said that she did not feel comfortable waiting for the Cuomo bill to pass. “It’s proposed, sure, but we just have no idea if it’s going to go anywhere,” she said.

Also, the county fee would not apply to thin bags for meat and produce; newspaper bags; garment bags; and those provided for prescription drugs, according to Mulé and the bill.

After a six-month grace period, fines would be levied, starting at up to $250 for a first offense, $500 for a second, and $750 for a third and subsequent violations.

The grace period ends in Suffolk County after June 30, and stores that violate the law face a $500 fee.

Retailers would keep the fees with the Nassau proposal, like Suffolk’s law.