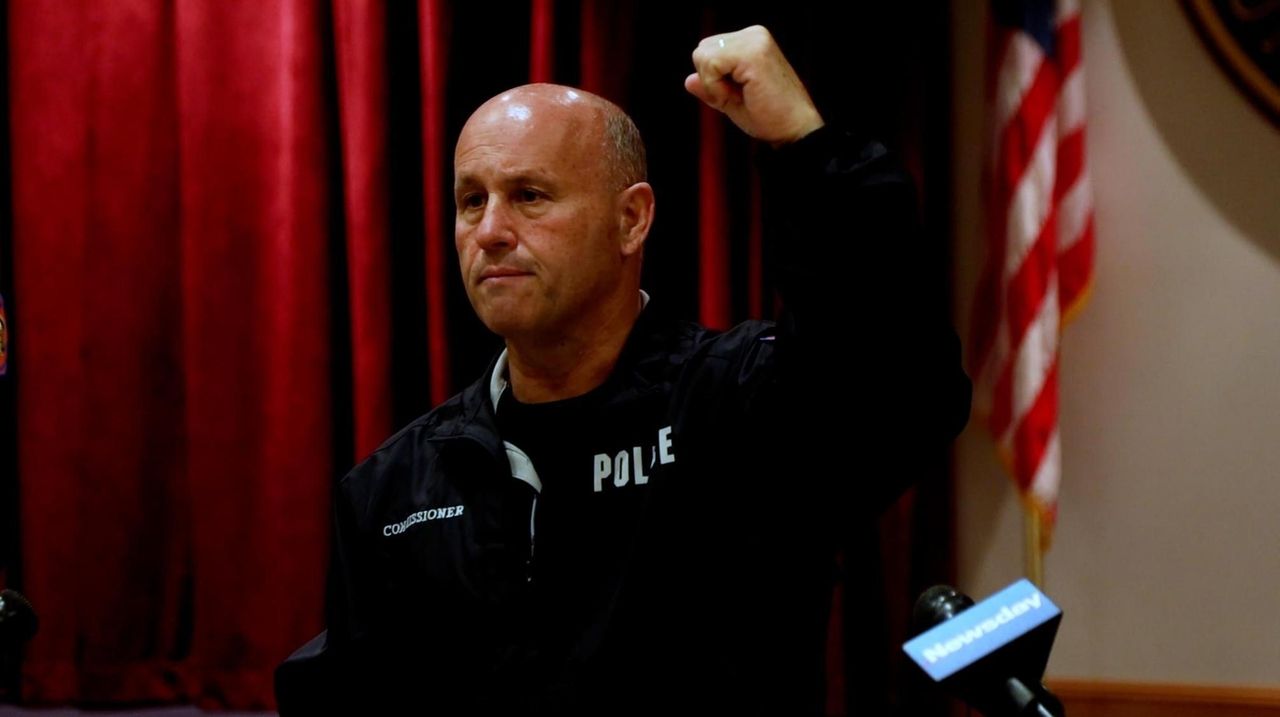 Nassau County Police Commissioner Patrick Ryder, speaking in Mineola on Thursday, spoke about Wednesday's incident, in which he said two police officers had an altercation with a Roosevelt juvenile who had a knife. Credit: Howard Schnapp

Two officers suffered minor injuries, including a lacerated finger, when a juvenile lunged at them with a steak knife outside a home in Roosevelt, Nassau Police Commissioner Patrick Ryder said Thursday.

One officer used a Taser on the 15-year-old suspect and apprehended him, Ryder said at a news conference in Mineola.

"The officers had all the right in the world … to use their weapon but they didn't," he said. "They were able to control him; use the de-escalation tools that we've given them and both of them are now home and recovering from their injuries."

The suspect, charged with attempted murder, assault and menacing a police officer, was not identified because of his age.

The teen was arraigned virtually Thursday, where defense attorney Camille Russel argued that her client has mental health issues and should be remanded to a psychiatric facility at Zucker Hillside Hospital in Queens. Russel said a recent family incident triggered the boy's behavior Wednesday.

But Presiding Judge Conrad Singer of the Youth Part directed the suspect, who lives with his mother, go to a juvenile detention facility and held him on bail of $60,000 cash or $100,000 secured bond.

The incident began at 12:30 p.m. Wednesday when the suspect approached a home on Lincoln Avenue and began ringing the doorbell while holding a knife in his left hand.

The elderly couple inside, who've never met the suspect, called 911. Meanwhile, the juvenile smashed a brick through the windshield of the couple's vehicle and then through their front door causing $250 in damage, prosecutors said.

A pair of Nassau police officers, each with four years on the job, arrived and chased the suspect outside a home on Eddy Road, the commissioner said.

As the suspect traveled through the yard on the right side of the home, the officers went down the left pathway expecting to trap him, Ryder said.

But the suspect doubled back and lunged at the officers from behind with a knife, he said. The first officer pushed the suspect out of the way and they both collapsed to the concrete, Ryder said. The second officer jumped on the suspect, instructing him to drop the knife, but the juvenile slashed the cop's right middle finger, Ryder said.

Even with an injured hand, the second officer was able remove the darts from his Taser — necessary because of their proximity — stun him and place him in handcuffs, Ryder said.

It's unclear what initially provoked the suspect, who told police he received a message from God to kill someone, Ryder said.

The first officer suffered an injured left arm while the second officer received multiple stitches to his finger and injuries to his right arm, Ryder said.

Ryder said the suspect could have killed the two officers but they relied on their training to survive.

"They're well disciplined police officers," he said. "At a time when there's a national message of defunding the police, this is where we invest in policing. We invest in training so we have good results." The suspect is charged with two counts each of attempted murder, second-degree assault, menacing a police officer and menacing; four counts of criminal possession of a weapon; and one count each of criminal mischief and resisting arrest.