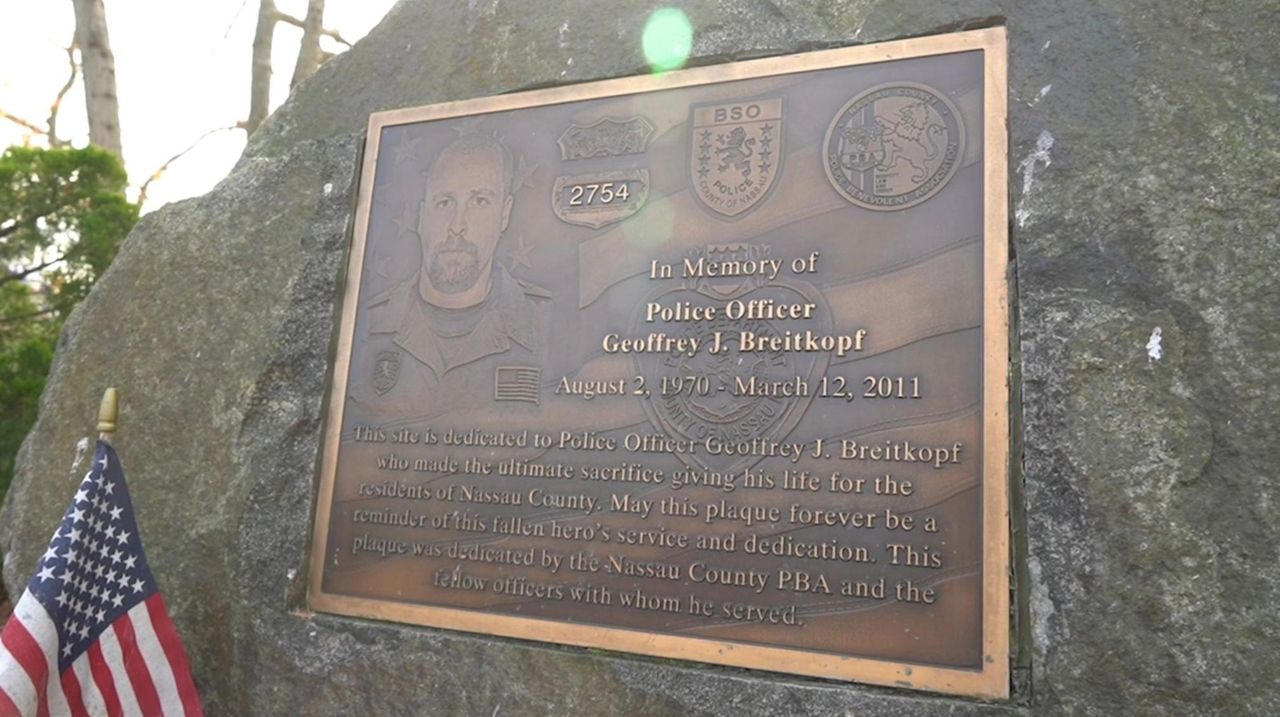 Nassau County Executive Laura Curran and Commissioner of Police Patrick Ryder held a ceremony on the 10-year anniversary of the death of Police Officer Geoffrey J. Breitkopf, who was killed when he was mistaken for a suspect in the line of duty on March 12, 2011. Credit: Newsday / Chris Ware

In the shadow of a large American flag draped high overhead, hundreds of officers with the Nassau County Police Department gathered in Massapequa Park on Friday to remember their fallen brother, Geoffrey J. Breitkopf, who was killed by friendly fire a decade earlier.

Breitkopf, a 12-year veteran and member of the elite Bureau of Special Operations, died March 12, 2011, when a Metropolitan Transportation Authority officer mistakenly shot him as both officers responded to help cops who had confronted and killed a knife-wielding man. That incident happened only blocks away from the site of Friday morning’s event on Front Street honoring Breitkopf.

Even 10 years later, working and retired officers said the events the night Breitkopf, 40, was killed still felt like an open wound. They not only rattled Nassau County police but officers everywhere, they said.

"It’s a tragedy when a police officer gets killed in the line of duty, but this was even more of a tragedy because it was friendly fire," said John Hill, 68, of Massapequa. Hill worked for Nassau police for three decades before retiring in 2010.

Moments before the ceremony began, a helicopter with Nassau police’s aviation unit flew over the crowd.

"What happened there that night ended a couple people’s careers," he said. "It changed everybody. I know it hardened people but it also brought us together."

Breitkopf, in plainclothes and carrying a rifle at his side, was fatally shot as he approached a home on Fourth Avenue. About 10 minutes earlier, officers shot and killed Anthony DiGeronimo, 21, who had barricaded himself in a bedroom of the home he shared with his parents before lunging at police with a large knife.

In 2015, a wrongful-death lawsuit filed by Breitkopf’s widow, Paula, was settled. A 2012 report by then-Nassau District Attorney Kathleen Rice on Breitkopf’s shooting found no criminality by Gentile or the officers who shot DiGeronimo.

"This is a message to the entire Nassau County community, that law enforcement is important, that the men and women who put on the uniform every single day, to service and protect us, put their life on the line every time they do that."

Nassau Police Commissioner Patrick Ryder said it’s all officers’ responsibility to pay their respects for the ultimate sacrifice Breitkopf, and the 40 other Nassau officers killed on duty or because of work-related injuries since the department was founded in 1925, have made.

"That day, when I arrived to the Nassau County Medical Center, I looked down at my brotherhood, the members that bonded together, looking for each other, to take care of each other and remember to take care of our family, a promise that we make.

Ryder also referred to the thin blue line flag, which long has signaled support of police. It has caused controversy on Long Island and elsewhere, as it was carried by white supremacists at several high-profile events across the nation last year and by members of the mob who attacked the Capitol on Jan. 6.

"Somehow, in this world of unrest … we've lost our way. Where a flag that has a thin blue line in it is a symbol of hatred. That flag is a symbol of our heroes," he said. "Our heroes that paid the ultimate sacrifice. Our heroes that we promised not to forget. We will always honor that thin blue line. We will always honor our fallen. And we will continue to stay together bonded in a brotherhood that is unbroken and cannot be divided no matter how much they come at us. We will stay together and stay united."

Breitkopf, of Selden, was survived by his wife and their two children, Connor, then 7, and Owen, then 4, officials said.

Patricia Breitkopf said after the ceremony that the tribute to her son was "beautiful."

She said she still struggles with his death and reliving the circumstances of how he was killed.

"I’m very appreciative," she said. "This will make me feel not like garbage all week. … It’s always tough."