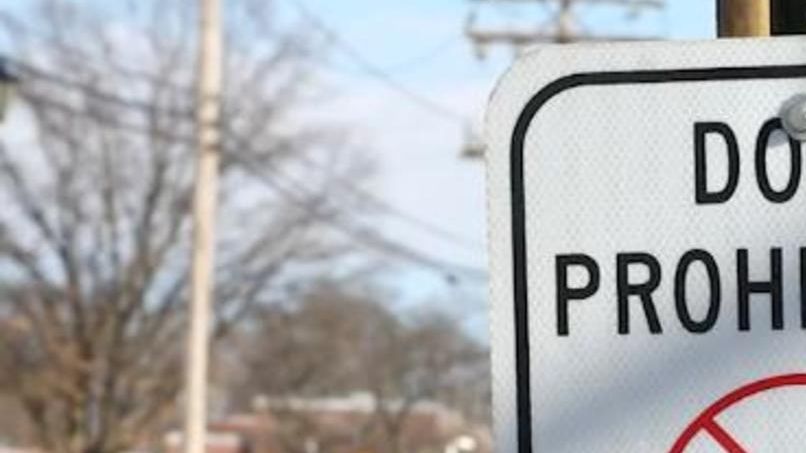 Walk your dog on school property in Port Washington and risk getting detention, so to speak. Officials in the district, home to some new turf athletic fields built under a $70 million bond issue, say residents must keep their pets off all school grounds -- and warn of calling in the cops if need be. Jan. 9, 2018 Credit: Newsday / Chris Ware) (Photo Credit: Port Washington Union Free School District

Walk your dog on school property in Port Washington and risk getting detention, so to speak.

Officials in the district, home to some new turf athletic fields built under a $70 million bond issue, say residents must keep their pets off all school grounds — and warn of calling in the police if need be.

Canines’ capers and their inevitable business, such as it is, have boomed in recent months. The district posted a notice featuring a dog icon on its website headlined, “A Message from the Port Washington Union Free School District: We love pets, but not on school property.”

“In recent months, district schools have experienced a high volume of dog owners who either have not seen or have disregarded posted signs that clearly state pets are prohibited from school grounds,” reads the notice, posted last month. “In some cases, direct requests made by security staff to remove dogs from school grounds have been blatantly ignored by pet owners and walkers.”

The problem is most prevalent at the high school and middle school campuses, where more athletic activities occur, the district said.

The schools’ fields are “a community resource for all of our district residents to enjoy, however, this resource is compromised for many of our residents when there is dog feces present on these grounds,” the notice says.

The district says that police may be called, if necessary.

“In the event that someone does not abide by a security representative’s direct warning or request to remove an animal from school grounds, the Port Washington Police Department will be contacted to assist in the matter,” the statement said.

Robert Del Muro, deputy chief of the Port Washington police, described the district’s notice as “kind of a surprise,” but said he will work closely with district officials should they require the department’s assistance.

“We would absolutely go and tell them they need to get off,” he said of dog owners who don’t observe the ban.

The deputy chief said he hasn’t heard of any difficulties.

“There’s been nothing. I can honestly say I don’t ever recall one complaint about a dog,” Del Muro said of his recollections about issues on school grounds in recent months.

His force is well-acquainted with the issue that is common in suburbia. In some parks, “We go up, and we tell them they can’t walk their dog there. It’s a small town. We know the people in the town. If it’s the same person over and over . . . we’d probably give them a summons.”

Generally, towns and villages in Nassau County have individual regulations on the issue, with fines spelled out in their municipal codes.

Port Washington is on Long Island’s North Shore in the Town of North Hempstead, where a pertinent regulation reads, “Any person who shall violate any provision of this chapter shall, upon conviction thereof, be guilty of a violation punishable by a fine not exceeding $250 or by imprisonment for a term not exceeding 15 days, or by both such fine and imprisonment.”

Anita Feldman, a resident who was walking her dog on the street outside the high school Wednesday morning, said she was not surprised by the district’s notice. She has walked her dog there in the past, she said — always cleaning up after it — but hasn’t been there in a while.

“Very occasionally they have stopped me, so I stopped going on the property,” Feldman said.

Asked about the district’s ban, she said, “Well, I think it’s kind of a shame that there aren’t a lot more places we can take our dogs, and we often clean up the area when we do. I haven’t been going there.”

Beverly Poppell of Bay Shore, an attorney and past chairwoman of the New York State Bar Association’s Animal Law Committee, said, “The issue might not have reached this point of contention if pet owners were conscientious about picking up after their animals.”

She added, “Sometimes, as Long Islanders, we forget that it’s important to be good neighbors. And that includes our dogs.”