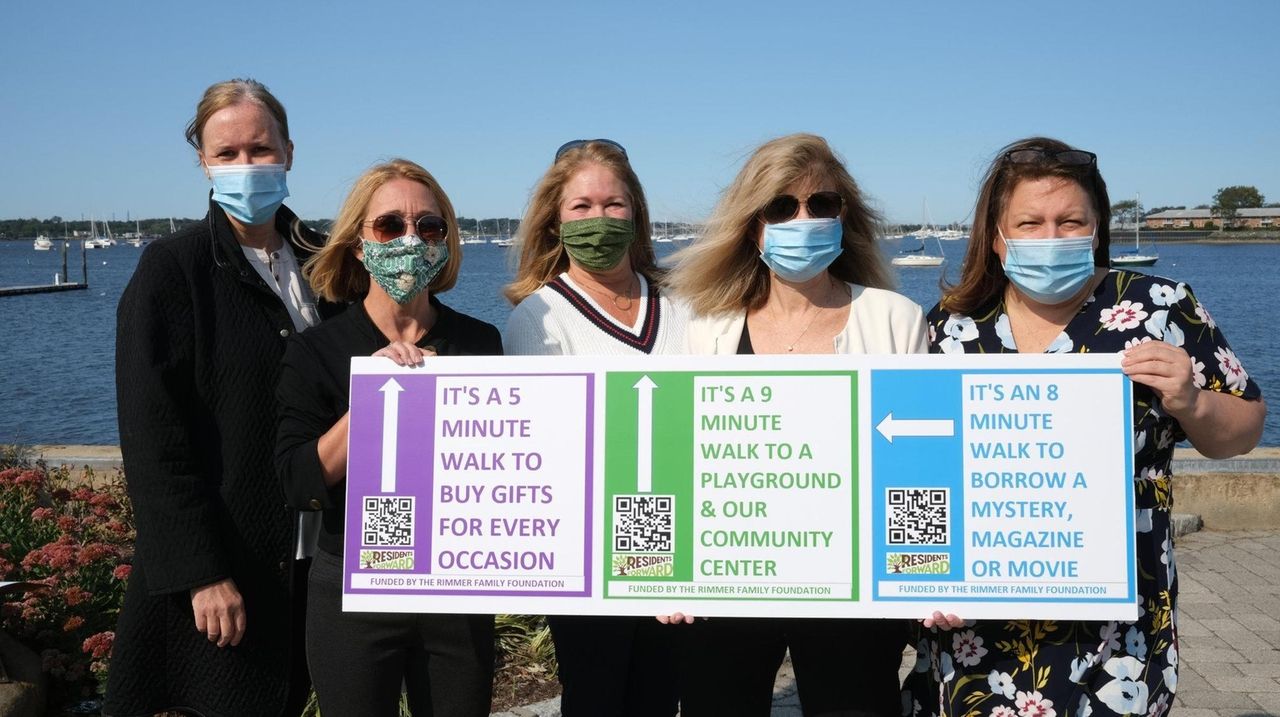 That is the message organizers from the Residents Forward civic group want to send by announcing a new signage program in Port Washington that encourages walking — instead of driving — to local landmarks, shops and restaurants.

The wayfinding program, which will roll out about 40 signs in April around Earth Day, will direct residents and visitors to local destinations with an estimate of walk time, organizers announced at a news conference at the town dock Monday, days before Long Island’s eighth annual Car Free Day Friday.

North Hempstead Town officials and organizers from the civic group said the initiative could also help boost downtown businesses that are still hurting from the coronavirus pandemic.

"Walk PW will highlight some of our community gems and our beloved waterfront," town Councilwoman Mariann Dalimonte said. "This initiative is going to bring community members out of the driver seat and onto their feet, which will help foster vibrancy and economic development in our community."

The signs are estimated to cost $2,500 and will be placed on utility poles around a one-mile radius from town dock, including Main Street, Shore Road and Manorhaven Boulevard, according to Patricia Class, executive director of Residents Forward.

The concept behind the signage program came from a national campaign Walk [Your City] that grew out of Raleigh, North Carolina, in 2012.

Mindy Germain, chairwoman of the initiative, said planning conversations began during the pandemic, which has killed more than 200,000 Americans and in its earlier months kept millions of Long Islanders at home.

During the shutdown, "we noticed two things: people were out walking more, and our local businesses were struggling," Germain said, noting the initiative aims to get people "to walk because cool things are closer than you think" and that "good walking will lead to good business."

Jennifer Ehrlich Rimmer, who spoke on behalf of the Ehrlich Family Foundation that funded the project, said the signs would help drive up traffic to local establishments.

"Since COVID, more important than ever, it’s how do we support our local community and … businesses," Rimmer said. "It’s our hope with this program that we would have an interactive platform to allow people to know the events that are happening, individual stores and how to get to them."

In a second phase that follows the signage rollout, Germain said the group plans to create five interactive installments in Port Washington after organizers analyze what has worked from the placement of the signs.

Organizers also tied the initiative to the goals of the moratorium that has banned commercial development in the waterfront district, which runs along Main Street from Sunset Park to Dolphin Green, since late 2017.

"When the Town of North Hempstead announced a moratorium on development in our waterfront business district, [Residents Forward] saw it as a once-in-a-lifetime opportunity to create a community vision," Germain said. What people want are "safe routes to enjoy shopping, strolling, open space and just an overall small-town and connected feel."