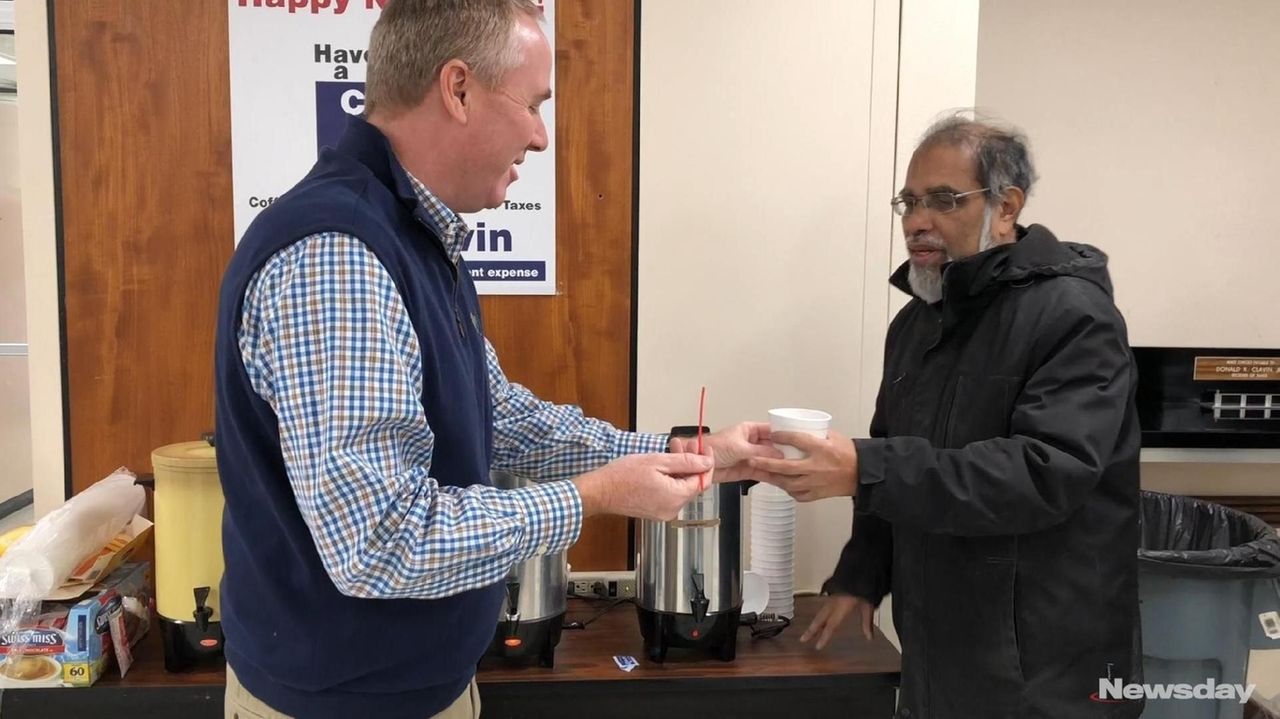 Hempstead residents prepaying their school and general taxes on Sunday, Dec. 31, 2017, received free coffee while they waited. Hempstead Town Receiver of Taxes Donald Clavin estimated that about 10,000 people came during the past week to prepay their taxes and he said he could count the number of complaints "with one finger." Credit: Howard Schanpp

Dozens of property owners trickled into the Hempstead and North Hempstead offices Sunday to make last-minute property and school tax payments before the end of the year in the hopes of taking larger deductions in the 2017 federal tax returns.

Officials said the number of residents at the offices — 150 in Hempstead and 300 in North Hempstead — decreased significantly from last week, when thousands of Long Islanders rushed to prepay their taxes in Nassau and Suffolk counties to get ahead of the new $1.5 trillion federal tax law.

“The surge is over,” North Hempstead Receiver of Taxes Charles Berman said. “Everybody who wanted to prepay these taxes has had the opportunity to do it. Not everybody wants to do it, and also not everybody is able to do it.”

Hempstead Town Tax Receiver Don Clavin estimated 9,500 people came into his office in the past week. He paid for a coffee truck to set up outside his office to celebrate the New Year’s holiday weekend.

“I never thought I’d be spending my New Year’s Eve at the receiver of taxes office, but I am very glad to be able to help taxpayers cope with the new federal tax code,” Clavin said in a statement.

The rush of activity was spurred by Gov. Andrew M. Cuomo’s Dec. 22 executive order allowing municipalities to accept tax prepayments, including in counties where it had been prohibited, such as Nassau.

Property owners said they wanted to take advantage of full deductions on state and local property, sales and income taxes while they still can.

Sandra Marion-Armstrong of West Hempstead said she waited until the last day to pay because “I didn’t want to stand on a long line” at the receiver’s office earlier in the week.

The 59-year-old nurse said she had to overdraw her bank account to pay her tax bill of about $20,000 early and plans to work overtime to pay it off.

Others in line said they dipped into their retirement funds or savings accounts to pay early. A North Valley Stream couple said they took out a no-interest bank loan. A West Hempstead man said he used money that had been slated for work on his house.

Mary Ellen Baker, 67, of Roslyn Heights said she did not think to pay early for the taxes on a family home in Great Neck until a dinner conversation with friends Saturday. The human resources worker said she was startled the tax office was open Sunday.

She said, “I thought I missed the boat.”