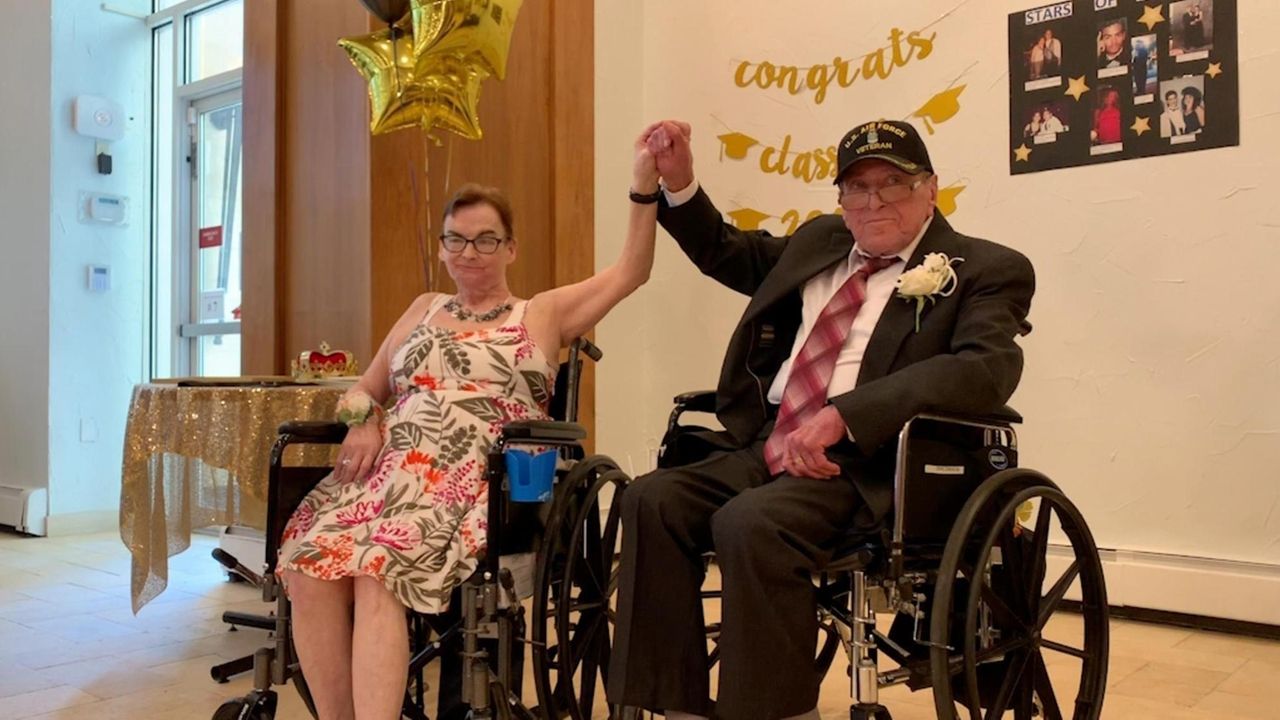 Edmond Crane, a Korean War veteran, missed his senior prom because he had enlisted in the Air Force, but on Friday he got to celebrate 65 years late along with about 50 other residents of Emerge Nursing and Rehabilitation Center in Glen Cove.   Credit: Howard Schnapp

Edmond Crane wore a black suit that hung a little loose around the shoulders with a white boutonniere pinned to his lapel. He confidently held the hand of his date as the two were wheeled to the center of a makeshift ballroom at the Emerge Nursing and Rehabilitation Center  at Glen Cove  last week to relive a memory they missed out on decades ago.

Crane, 85, missed his senior prom at Richmond Hill High School in Queens  because he had enlisted in the Air Force, but on Friday he got to celebrate almost 70 years late along with about 50 other residents.

“This is more fun than my prom could be,” said Crane, a Korean War vet.

Samantha McHale, a director of therapeutic recreation at Emerge, organized the Aug. 30 event after learning that many of her clients didn’t get to attend their dances.

“Most said they didn’t go for personal reasons or had financial reasons that prevented them from going,” said McHale, who wore a long pink gown. “It kind of grew into something so much more.”

The dance was held in the afternoon; the cocktails were virgin, the attendees mostly seated in wheelchairs. They nodded their heads to the music played by a young DJ who, when asked about the song selection, said he'd be spinning the "old stuff" — music spanning the 1940s to the 1970s.

Norma Jorglewich, 76, bounced to the music in her wheelchair. She graduated from Westbury High School in 1961 and spent the night of her senior prom at home taking care of her disabled sister.

“I remember being a little disappointed, but my parents were busy, and someone had to look after her,” Jorglewich said. “I think this is great.”

Pamela Musso, a nurse at the facility, gripped Crane’s hands and swayed with him to Chubby Checker’s “The Twist.” The staff, dressed in tuxedos and evening gowns, gathered around Crane, waiting to dance with the prom king.

Earlier, Jeffrey Pravato, the mayor of Massapequa Park, crowned Crane the prom king and named Nicole Farley, 66, the prom queen. Farley, a Vietnam veteran who enlisted in the Navy after graduating from high school and served as an aerial photographer, also didn’t attend her prom because she was traveling at the time.

“I’m not really the prom-queen type,” said Farley, who wore a summer dress and a corsage of clumped roses. “So this has been really special.”

Crane said he didn’t regret not attending his dance but still felt it was something he had missed out on. Crane’s son, Alex Crane, said his father brought it up once while he helped dress him in a tuxedo for his own prom at Paul D. Schreiber High School in Port Washington.

“It kind of felt like he was living vicariously through me at the time,” said Alex Crane, 53, of Rockville Centre.

Crane spent the afternoon draped in a sash and wearing a plastic crown, eating canapes served to residents by waiters and dancing with anyone who approached him.

“It’s a great feeling,” Crane said. “I’ve never been king of anything else.”

Going back in time

About 50 residents attended the senior prom on Aug. 30 at the Emerge Nursing and Rehabilitation Center in Glen Cove.

PROM KING Edmond Crane, 85, a veteran of the Air Force.

PROM QUEEN Nicole Farley, 66, a veteran of the Navy.