A protester is taken into custody after he bumped into a police officer in East Meadow Friday in an incident that was captured on video.  Credit: Newsday/Alejandra Villa Loarca

The arrest of one of three demonstrators Friday evening during the protest that began at the East Meadow Mall and continued onto Hempstead Turnpike was recorded by a fellow protester and eventually posted on Twitter, where it has been viewed more than 5 million times.

Nassau County police, while not commenting directly on the video, defended the Friday arrests.

James, the top elected law enforcement official in the state, on Twitter reacted to the video, writing: "Please report this and send visuals to my office." James added a link to file a complaint.

A spokesman for James declined to comment Sunday when asked if the office was investigating any complaints regarding the video. Gov. Andrew M. Cuomo had tasked James with investigating the police response during demonstrations and compiling a public report.

Moments after the arrest depicted in the video, Mehrin Ali, 20, an East Meadow native and New York University junior, recorded video of another protester's arrest around 6:30 p.m. on Carman Avenue near Hempstead Turnpike. Her video shows a demonstrator arguing with police about the other arrest before being pulled to the ground and taken into custody himself. 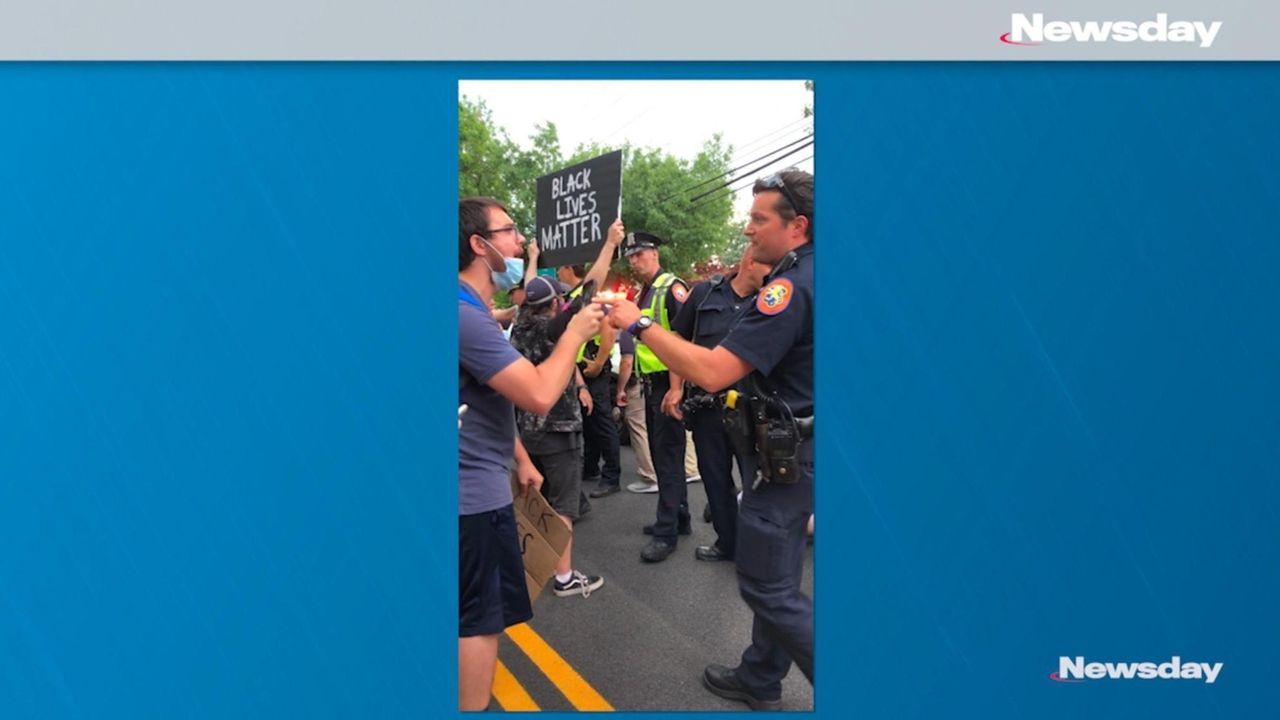 She said she's filed an official complaint about the police actions with the department and plans to also lodge a complaint with the attorney general.

"It’s definitely good that it’s become viral," Ali said. "We definitely didn’t expect a protest in East Meadow, of all places, to blow up on online."

Ali said initially the police were "very cooperative and very helpful" in clearing traffic for the protesters. But that changed when the protester in the video, walking on Carman Avenue and pulling a speaker on wheels, bumped into an officer and was arrested.

"I think regardless of if they asked him to walk on one side of the road or not, he shouldn’t have been arrested," Ali said. The video shows several officers taking part in the arrest and three holding the protester down. "It seemed like the officers really took it out of proportion," she said.

Police Commissioner Patrick Ryder, when asked about the arrests on Saturday at County Executive Laura Curran's daily coronavirus news briefing, said his officers had closely coordinated on the protesters' route but said they chose to go off-course "on purpose." That, he said, "causes my officers to go flying across dividers."

"We gave them the lanes, we gave them the turnpike," he said, adding that as the group neared Carman Avenue "one of the individuals decided to jump into oncoming traffic" causing a car to come to a "screeching halt."

In the arrest on the viral video, Ryder said the man "decided to go around the officer, bumped him a little bit." Another protester arrested, Ryder said, "pushed my lieutenant."

Det. Lt. Richard LeBrun, a department spokesman, on Sunday did not respond when asked if the officers' actions that were captured on video were appropriate and whether Internal Affairs was investigating but instead released a statement from Ryder that said:

“The Nassau County Police Department has provided security for thousands of people at over 80 mostly peaceful protests over the past two weeks. The department supports free speech during these protests and has the responsibility to protect  the safety of all."

Curran said police have monitored 75 demonstrations of some 30,000 protesters in the name of George Floyd, the black man killed in Minneapolis police custody on May 25, and there have only been 14 arrests. She added that one officer suffered a broken ankle during the protests and "one was punched in the face."

Asked for comment on the video Sunday, her spokeswoman said to refer to Curran's remarks from Saturday.