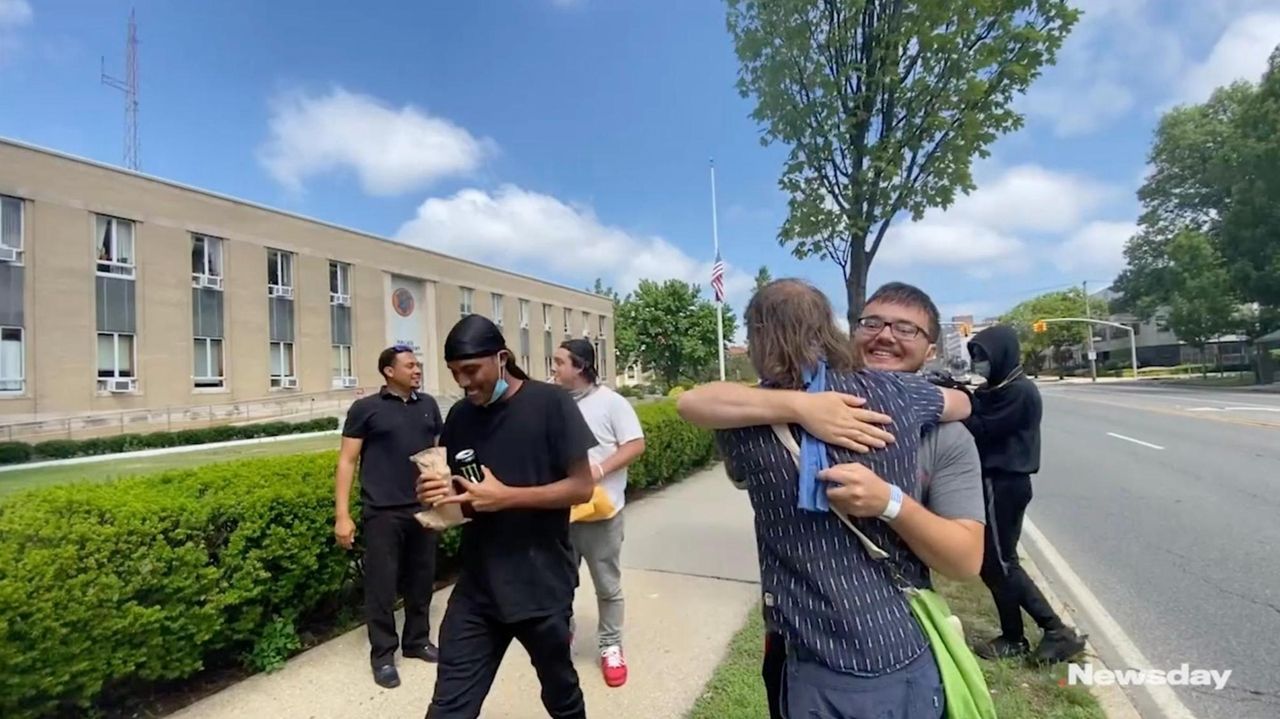 A group of about 40 people gathered Saturday morning at Nassau County’s police headquarters in Mineola to show support for two protesters arrested Friday — days after a Roslyn protest against police brutality.

Three protesters were identified after the demonstration and asked to report to Nassau police Friday to receive appearance tickets. One person was released with a summons while two were held in custody on outstanding bench warrants.

The three marchers were issued disorderly conduct violations for the July 1 protest, where police said they were blocking traffic and not adhering to the Free Speech Roadway Protection Protocol guidelines announced by Nassau County Executive Laura Curran on the same day as the Roslyn protest.

Police said they told the group repeatedly not to block the road when a group of demonstrators blocked the intersection at Roslyn and Harbor Hill roads in Roslyn Heights.

The group repeatedly ignored police orders, walking in the streets, taking up both lanes of traffic and sitting in the middle of the intersection, which blocked traffic for 20 minutes, LeBrun said.

"We have no problem with protests if you have a route. If you’re not conforming to what you're asked to do, we have to worry about God forbid someone gets hurt," LeBrun said.

Police arrested Michael Motamedian, 20, of Westbury, on a failure to appear warrant on a 2019 drug charge.

Jeremiah Bennett, 26, of East Meadow, was arrested because of a January warrant on a criminal mischief charge, LeBrun said.

Both were also cited with obstructing traffic during the protest and released Saturday morning.

Curran said on Wednesday the aim of the new guidelines was to keep both protesters and motorists safe.

“These arrests are a scare tactic. This is them trying to start putting an end to our movement,” protest organizer Terrel Tuosto said.

“They want us to stop, they want us to go home … but this is not a fad, this is a live-saving work that we’re doing. That’s how serious it is. We won’t stop.”

Motamedian and Bennett were greeted by loud cheers and chants of “Black Lives Matter,” as the two walked out of the police building where they were held overnight. Several people rushed to embrace them.

Motamedian said he appeared voluntarily Friday at the Third Precinct in Williston Park, where he was arrested and later transferred to the building in Mineola.

Bennett said he was arrested Friday afternoon at his home for failure to pay $220 in court fees for a charge he said was long ago thrown out.

“It’s clear what’s happening. … They want to pick up people who are frequently protesting. I mean, they really had to dig into my past.”

Bennett, who said he’s been protesting every single day for the past month mostly on Long Island, said he offered to pay the fee in lieu of going to jail but was declined.

“They’re just clutching at straws to intimidate us,” he said.

Motamedian and Bennett are due in district court in Hempstead on the disorderly conduct summonses Friday.