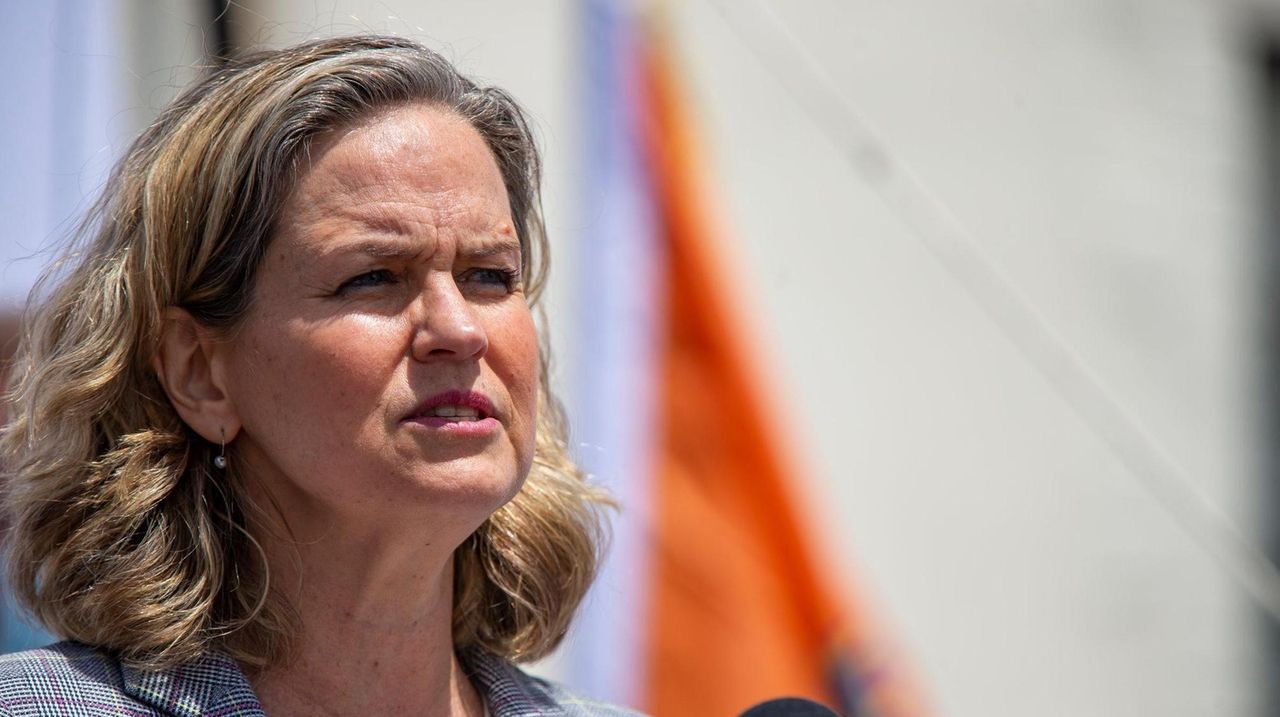 Thousands of Long Islanders from Great Neck to East Hampton demonstrated against police brutality and racism Sunday, injecting fresh momentum into a mostly peaceful movement as they renewed calls for justice after the death of George Floyd in police custody.

Long Islanders who have been speaking out for more than a week kept up the fight in at least 20 rallies, marching, chanting, stopping traffic and lying down on roads in peaceful, but forceful, gatherings that tested law enforcement and sometimes spawned tense exchanges with counter-protests. Young and old marched in diverse crowds, defying social distancing as they called for a reversal of racism that many said was hiding in plain sight.

The demonstrations came after 11 protesters were arrested Saturday, and two Nassau County Police Department officers injured, when a group in Merrick tried to get onto the Meadowbrook Parkway. Sunday, state police lined the Meadowbrook and there was a smaller, more orderly gathering.

Shouting the names of victims George Floyd and Breonna Taylor, the protest shut down large sections of town as it moved from the central part of Bay Shore east to Saxon Avenue near Islip, then returned west to Islip Town Hall.

There, protesters lay on the hot pavement for 8 minutes, 46 seconds — the amount of time Minneapolis Police Officer Derek Chauvin kept his knee on Floyd’s neck. Gregory Singer, one of the protest leaders, led chants of “I can’t breathe” and “Mama!”

When the emotional vigil was over, Singer told the crowd, “These crowds will disperse … Let your life be your protest.”

Wilma Matthews of Bay Shore, 76, a retired nurse, said she marched for her four grandsons who were born “poor and black, so they have a target on their back for the police to shoot them and kneel on their neck. I have had enough. Enough.”

In Smithtown, competing rallies captured the discord in a Suffolk County enclave. A crowd of hundreds of Black Lives Matter protesters gathered on Main Street outside the Stop and Shop.

A half mile down the road, at Katie’s bar, a smaller group carrying “Blue Lives Matter” signs and American flags gathered, and almost none of them wore masks.

The Black Lives Matter protest in Smithtown had set off a social media firestorm of concern from residents who had expressed fear about looting and vandalism. Smithtown officials had tried to ease their concerns.

“We need to spread the message of peace, love and prosperity. It’s not black versus white, it’s racist versus anti-racist.

But outside the bar, which had been boarded up, protesters held up American flags and “Blue Lives Matter” flags.

“We’re trying to protect our town,” said Donald Sharpe, 56, a retired police officer and taxi driver. “Peaceful protests are one thing. Violent protests are another.”

Shortly before 5 p.m., hundreds of Black Lives Matter protesters walked up Main Street past the railroad station in Smithtown and Katie’s bar.

As marchers walked up the street chanting “Black Lives Matter,” the other side started chanting “USA.”

Police used their bicycles to stand between the sides as they hurled profanities at each other.

In Merrick, where a counterprotest by a small group of residents last week drew national attention and thousands of protesters on some nights, a group of about 100 marchers walked down virtually empty streets Sunday evening, flanked by dozens of police officers on foot and in vehicles.

Christopher Richardson, 18, of Freeport, a rising sophomore at the University of Hartford, said he and his friends had marched almost every day for the last week, under sometimes hostile conditions.

Richardson said he heard racial slurs that made him “angry and disgusted. ... I gotta go through the same stuff that, growing up, my mother, father and grandfather went through.”

He said that while marching he followed the advice his parents had given him before he left for college: “Don't get provoked by words and don’t retaliate.”

Across from Smith Haven Mall in Lake Grove, more than 200 protesters gathered, chanting “no justice, no peace” and “black lives matter.”

Protesters — mostly young, almost all wearing masks but not socially distant — said it was significant that protests were being held in traditionally affluent suburbs.

“This is a very big event in American history,” said Marquis Sampson, 23, of East Setauket. “Most protests are in big cities. This is an opportunity to protest here.”

Anne Raybin, 94, and her daughter Linda Turner, 67, of Setauket, said a local golf club had a sign just over 50 years ago that Jews, Catholics and dogs were not welcome.

“It’s a critical issue in our society and long overdue,” Raybin said of the fight against racism. She called the widespread protests happening nationally “long overdue. It’s a shame it took George Floyd’s death.”

Rodney and Stephanie Burke of Shirley also attended the rally.

“I’m a mother of three black sons. And when my 19-year-old want to go to Taco Bell at 12 at night, I’m afraid,” she said. She reminds him not to blast his music and to make sure he takes his insurance and license.

Rodney Burke, a pastor at Abundant Life Church of God in Holbrook, called the protest “a long time coming. It’s all colors, all races and economic backgrounds” protesting police brutality.

In Farmingdale, more than 300 protesters gathered at Starbucks on Michael Avenue and marched to Allen Park. Many chanted "white silence is violence," and "no justice, no peace" and the crowd ballooned in size to about 1,000.

Many residents came out of their homes to cheer the protesters, chanting “black lives matter” and “I can’t breathe.”

Protest organizer Malik Seelal, 24, of Farmingdale, who with the help of two longtime friends, Jasmine Rashid, 24, and Sandra Costanzo, 27, also of Farmingdale, put the event together, said he was inspired to do so by a quote he read on social media.

“It said to ask yourself what you’d be doing if you lived during the time of the civil rights movement,” he said. “And I thought about it for a while and basically this is it … I’d be mobilizing, making my voice heard, protesting, marching. So that’s what I’m doing, and will continue doing now.”
In Freeport, a crowd of roughly 500 people walked from the train station to the Nautical Mile, with police closing off parts of Sunrise Highway to allow protesters to make their way toward the water. The protesters marched down the highway and through the local streets until they reached Bracco’s Clam Bar, where they stopped, knelt with their fists in the air, and observed eight minutes of silence in Floyd's memory.

Some of the protesters had signed a petition to boycott Bracco’s. Newsday reported Saturday that Jon Bracco, who co-owns Bracco's and Captain Ben's, was criticized for reposting President Donald Trump's tweet in which he described as "thugs" Minneapolis protesters. Bracco has since apologized.

While police stood in front of the restaurant, to discourage any potential trouble, a few protesters spoke, and then one said, “No more Bracco’s,’’ and then the group moved on.

The protesters then made their way back down Ocean Avenue and into downtown and back to the train station, a roughly 5-mile circuit that took about two-and-a-half hours to complete.

Andrea Neal, 22, a Nassau Community College student from Valley Stream, organized the event. Neal said she had attended several protests and was inspired to organize one of her own. “When I woke up and saw Merrick neighbors taunting protesters, I knew I had to organize this.’’

“They’re calm and they’re focused and they are doing an excellent job de-escalating tensions, working with protesters in order to avoid conflict,” Curran said during a news briefing in Mineola.

Ten of those arrested were between the ages of 20 and 59 and one was a 15-year-old, Curran said. Ten were from Nassau County and one was from Suffolk.

She said the protesters were mostly peaceful and noted that a police lieutenant got on a knee and prayed with protesters.

A police sergeant suffered a broken ankle and will require surgery, and another officer suffered a scratched cornea during the arrests, Curran said.

“I have to just reinforce that violence against police will not be tolerated,” she said.

Curran and police commissioner Patrick Ryder said that a small group of the Merrick protesters were inciting others to cross onto Meadowbrook Parkway, which they said was dangerous during a rainy afternoon. Ryder said that went on for about four-and-a-half hours before officers made any arrests.

He stressed that no protesters were injured during the arrests and said he was proud of the officers’ actions.

“My cops are not bad people, my cops are the good guys,” he said. “They took an unleashing of vulgarity and calling us murderers and everything else as we walked that route with them. Nobody engaged. All stayed calm, all stayed professional.”

Hundreds of drivers call for change in NAACP caravanThe convoy, organized by local chapters of the NAACP, traveled from Mineola to Hauppauge in a demonstration against police brutality. See photos of protests on LI over George Floyd's death in MinneapolisProtests in communities across Long Island, including Plainview and Riverhead, have occurred following the death of George Floyd by a Minneapolis police officer. See complete coverage of the George Floyd protestsThe death of George Floyd, an unarmed black Minneapolis man who died of asphyxiation after a white police officer knelt on his neck for more than eight minutes, has set off protests around the country, including in New York City and here on Long Island. Here's Newsday's complete coverage of George Floyd's death and the subsequent protests.