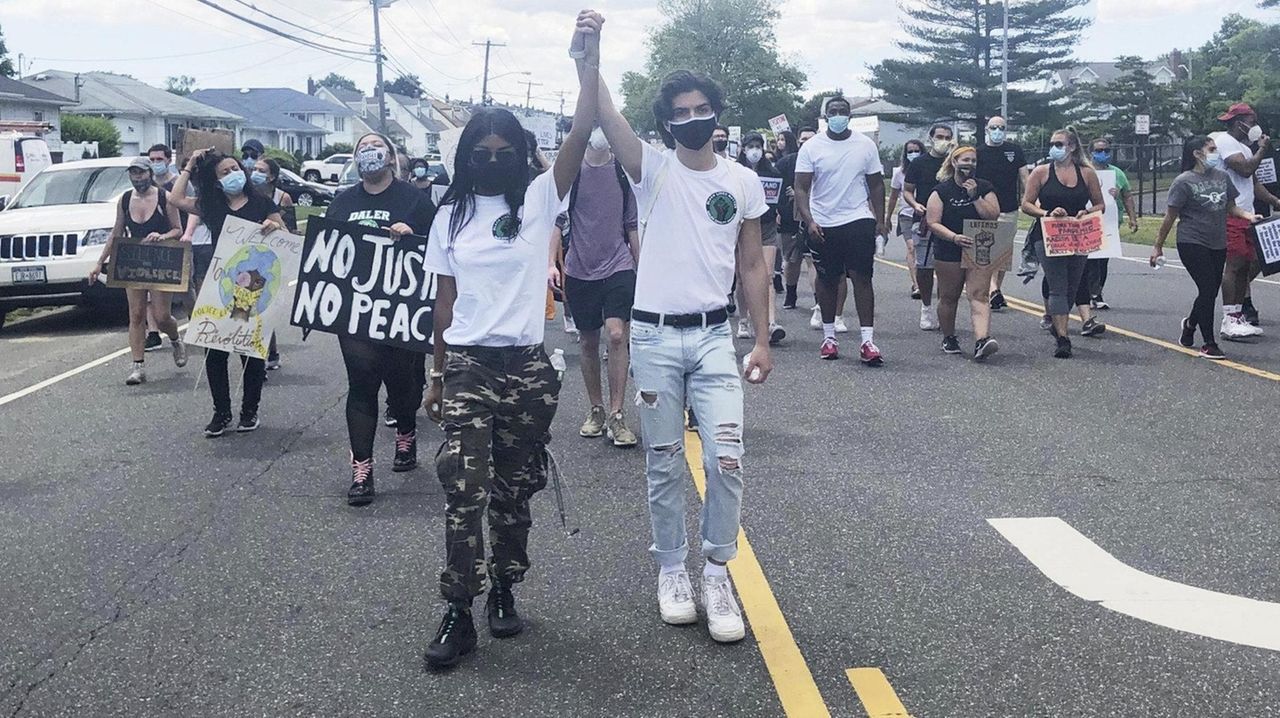 At 8 a.m. Sunday, Madison Outing rushed to her best friend's house to wake him. She and "sleepy head," Michael Haggerty, had a protest to get to.

And not just any protest, it was the one the 17-year-olds had spent weeks organizing.

The two Farmingdale High School students had planned a peaceful demonstration against racism, racial inequality and police brutality in the wake of George Floyd’s death after a white Minneapolis police officer knelt on his neck for almost nine minutes.

The teens share many things in common: They both love musicals and theater; their fathers are named Kenneth; and both are gay. They've bonded over the discrimination they say they’ve faced on Long Island “time and time again”: Outing mostly for being black and Haggerty for being gay.

It's now 1 p.m. and the friends, both sporting T-shirts emblazoned with the logo of a fist surrounded by the words "Black Lives Matter Daler Civility March," lead the more than 600 people at their protest over Farmingdale's streets to Allen Park.

The pair, who in eighth grade became instant friends while participating in a school production of "Shrek: The Musical," had spent many "long, 10, 11-hour days," prepping for the event.

One of the biggest bumps in the road? "The protest permit," Outing said. It cost $500 and involved a wait, Haggerty added. Though raising the money was no issue — "we raised it through a GoFundMe page in less than an hour!" — they didn't secure the permit until the day before the march.

"I think that was the most stressful part, other than worrying about people actually showing up," Outing said.

Outing so worried about the protest being a bust, that when people turned out in droves she couldn't help but cry.

"It was very sweet," Haggerty's mom, Yolanda Aponte, who is Puerto Rican, said. "They worked so hard on this and were so nervous and excited. I was scared for them at first … that it wouldn't be what they wanted, that some people could come and ruin it with violence."

Outing's parents, who also attended the march, said they were proud to see such a diverse crowd there, with so many young people renouncing racism and agreeing that Black Lives Matter.

“For us, this isn’t about black versus white or us versus cops,” Outing said. "It's about right versus wrong, about the rights of all black people to have equity and live in peace … or just live, period."

The movement, they said, is not about adding to the hate, it's about ending it.

She pointed to five Nassau County police officers walking alongside demonstrators and said, "See, they're here with us too."

"At the end of the day, what we all want is to live freely and safely being who we are without constantly having to fear for our lives," she said.

It's 1:29 p.m. and the sun is blazing down on the diverse group of protesters. Near Outing and Haggerty, a  man holding a sign that reads "Make Racists Afraid Again" wipes sweat off his brow, while a woman grins, proudly displaying her artsy "Latinos for Black Lives Matter" sign.

Outing was about to speak when a young man in a striped shirt and faded black ripped jeans bursts out loudly chanting, "Hey, hey, ho, ho … these racists, racists, got to go!" The crowd quickly echoes the chant and Outing laughs: "Exactly! What he said!"

Outing and Haggerty agree they'd like to see more people of color become police officers, though Madison, who has several relatives who "proudly wear the uniform," says officers who are minorities face challenges.

"Badge or no badge, people still look at their skin color," she said. "Before being officers, they're black men or black women … and when the uniform comes off then what?"

That's why increased training, more stringent background checks and zero-tolerance policies are needed to prevent officers from abusing their power and using excessive, unwarranted force against minorities, they said.

"Police officers are supposed to protect. Protect. Not kill. This violence and these deaths need to stop and that's why we're here, to make that change," Haggerty said.

It's 1:50 p.m. and as the group turns the corner toward Ellsworth W. Allen Park, some residents stand on their front porches, raise their fists in the air and yell "Black Lives Matter." "Whooo!."

"This whole experience has been surreal," Haggerty says. "Walking through these streets, feeling this energy from all these people supporting the cause and supporting us, hearing them chanting and seeing their signs … it's insane."

But Haggerty also recalls many "not so happy" times on these same streets, bike riding with friends when "someone will drive by … yelling sexual slurs, calling me the F word and laughing," he said.

Outing says she's faced discrimination for both her sexuality and race but says it was an incident last year in which a white classmate posted a racist Snapchat message that first motivated her activism.

"He said people who support Black History Month should kill themselves and used a bunch of derogatory terms," she said.

Students hurt by the Snapchat message peacefully approached the boy who shared it and expressed their pain over it. That student is now her friend and part of the 30-60-member R.E.A.L Harmony club, Outing said. "Change can happen," she said. "I've seen it."

It's 2:13 p.m. and now at Allen Park, Outing and Haggerty climb the bleachers and address the crowd through a megaphone. "As youth, we know it's our duty to become a beacon of hope and not remain silent amid these rising injustices," she said. "As doctors and researchers work to find a cure for COVID, we're standing here as the doctors and researchers, working to find a cure for the disease of racism."

When Outing was done speaking she was again, in tears. Haggerty clutched her closely, comforting her as he thanked protesters for being there and encouraged all who could to vote.

At 2:33 p.m. when it was all over, some protesters walked away and others hung out, chit-chatting, Outing and Haggerty high-fived and hugged.

"I can't believe we did it but we did it, girl!," Haggerty said excitedly to Outing. "Yes … and if things don't change for the better, we'll do it all over again," she said, "But right now … right now, I'm happy and I'm hopeful, I'm hopeful for the future."