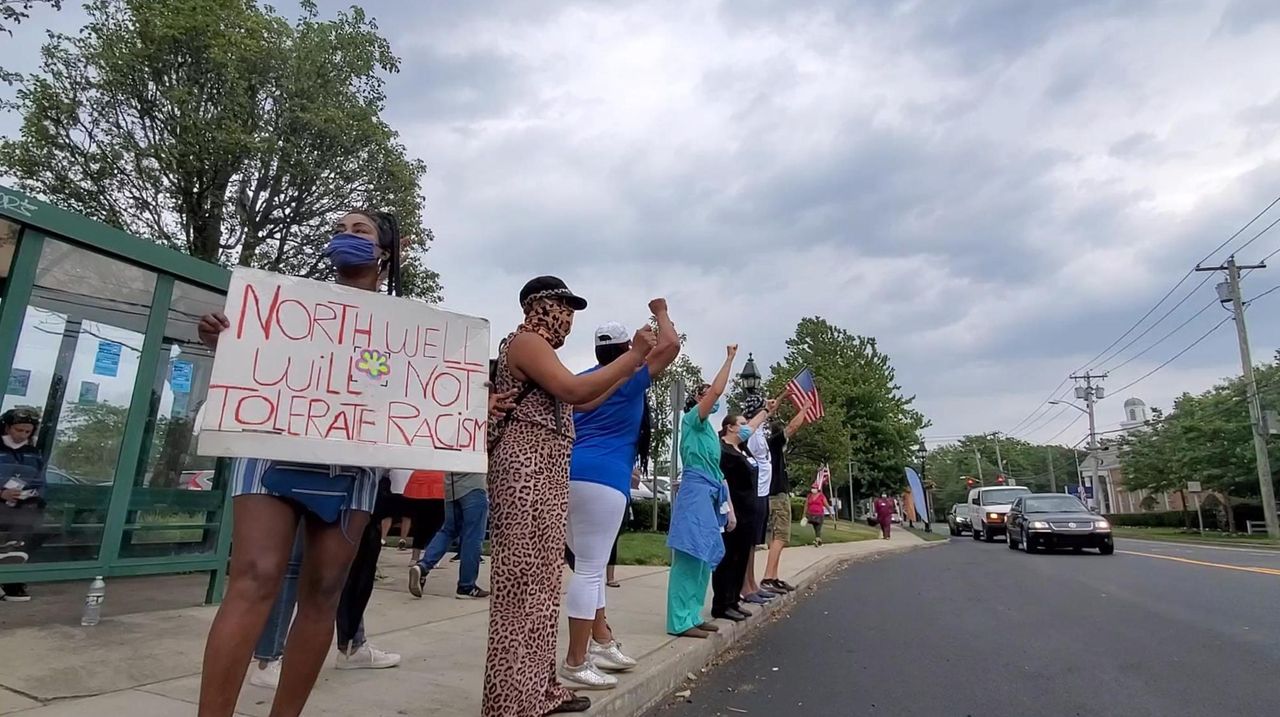 This story was reported by Jean-Paul Salamanca, Craig Schneider and Dandan Zou. It was written by Schneider.

Protesters braved pouring rain Saturday to continue to hold rallies on Long Island, and some protests expanded their message to include improving rights for transgender individuals and criticizing health care inequality.

Chanting in pouring rain, demonstrators called the "loitering for the purposes of engaging in prostitution" offense a law that targets transgender people based on their clothing or appearance.

“They are literally pulled over, questioned and stopped just because [of how they look],” said Shanequa Levin, 40, of Huntington, standing next to her 16-year-old daughter, Ariana Levin, on Merrick Road. “Right away, they are profiled just for being themselves.”

Organizers called on protesters to contact State Senate and Assembly members to support a bill that aims to repeal what they called a “walking while trans” law.

Joseph Agovino, a spokesman for Brooks, said the senator became a co-sponsor of the Senate bill on Tuesday and expressed his solidarity with this issue, a development protesters took to mean that their organizing worked.

“It’s going to go a long way in supporting the larger Black Lives Matter movement and ending police brutality against trans people of color,” said Elmer Flores, 24, of Brentwood, on behalf of Young Long Island for Justice and New York‘s 2nd District Democrats, two groups that organized the rally.  “It’s going to affirm this community in their right to freedom and self-expression.”

A counterprotester, John Budnick, 70, of Massapequa Park, sang the national anthem and other patriotic songs in the background, holding signs that said: “Defend the Police Who Will Respond to 911 Calls for Help."

Toward the end of the 1 1/2-hourlong rally, Brooks came to speak to protesters, who were forced by heavy rain to retreat to the overhang of the office building. In a follow-up phone interview, the senator said he supported the bill to repeal the law.

“There were instances that people were citing where it had been used unfairly,” Brooks said. “Given today’s society in how we often gather in the community in small groups, the law [is] unnecessary.”

At Southside Hospital in Bay Shore, roughly 30 protesters gathered in front of the hospital to protest health care inequality and racial discrimination in the workplace.

Bobby Smith, 25, of Bellport, the protest’s chief organizer, said he had worked at Southside Hospital for four years and had witnessed several instances of employee and patient discrimination at the hospital.

Smith added that the recent racially insensitive comments by an unidentified female hospital employee during an online social media chat, in which she said Latinos and African-Americans who enter the facility are mostly gang members, left the Latino and Black community “very distraught.”

A statement Saturday night from Northwell Health spokesman Matthew Libassi said: “Northwell condemns and does not tolerate any form of hate, racism, discrimination and harassment."

Northwell Health officials previously told Newsday the hospital had parted ways with the employee, though they declined to reveal whether she was terminated or left of her own accord.

Smith is scheduled to meet with hospital officials next week to discuss his concerns further, he said.

Several cars driving by honked in support of the protesters, which drew cheers from them.

The protest was halted at 4 p.m. due to rain, but Smith said the protest would resume next Saturday at 3 p.m. in front of the hospital.

The rain forced the postponement of other rallies set for Saturday. A protest planned for Oceanside was rescheduled to July 3.

A rally slated for Hempstead, which was slated to feature Ilyasah Shabazz, the daughter of slain civil rights leader Malcolm X, was postponed until 2 p.m. Sunday.