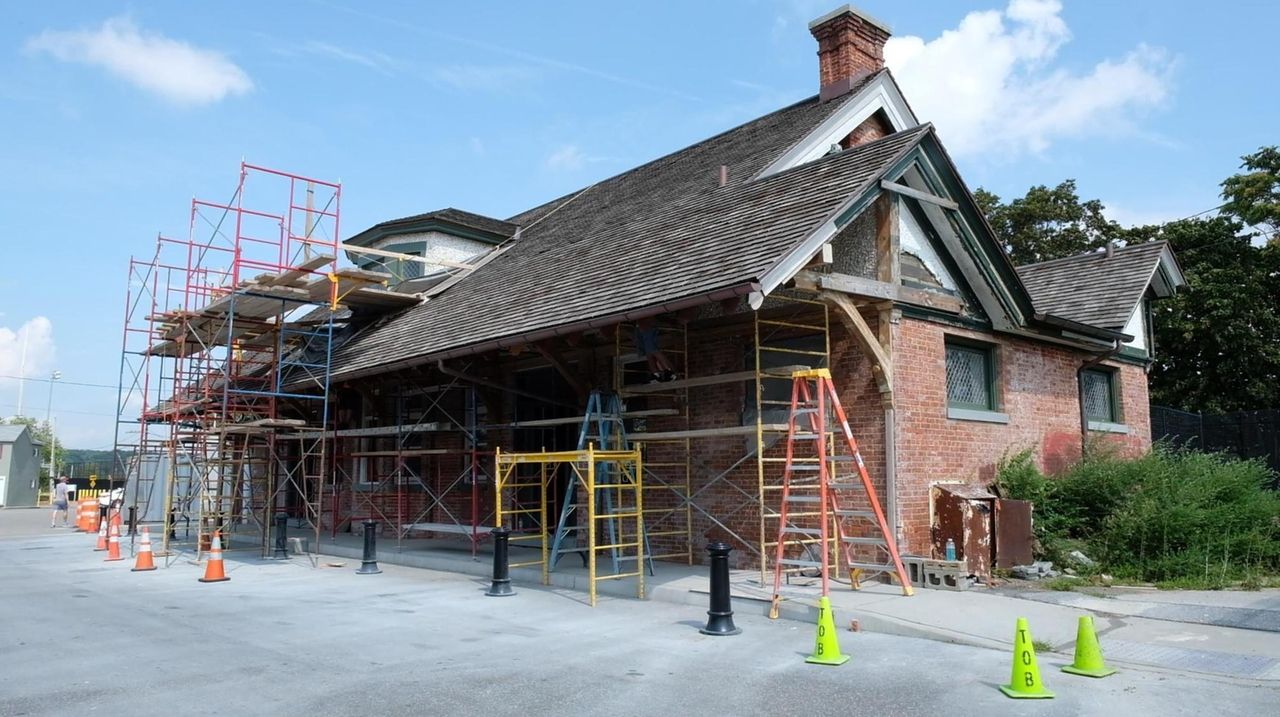 Oyster Bay Railroad Station Restoration Committee co-chair David Morrison said last Tuesday that the goal of a $1.8 million historical renovation is to return the station to its early 1900s glory when it was used by Theodore Roosevelt. Credit: Jeff Bachner

When the summer solstice sun set on the historic Oyster Bay train station this year, no glasses clinked on the bay to raise money to restore the last stop on Theodore Roosevelt’s route to Sagamore Hill. The pandemic sunk what would have been the Oyster Bay Railroad Museum’s 13th annual picnic, an event usually held at Seawanhaka Corinthian Yacht Club on Centre Island.

“Unfortunately because of this COVID crisis it took a lot of money away because people were scared,” said Gary Farkash, board secretary of the museum. “We had to cancel our fundraisers, like everybody else.”

The approximately $2 million restoration project is funded on a pay-as-you-go basis, with work proceeding as money becomes available for the next steps, Farkash said. The museum still needs to raise another $1 million to finish it, he added.

The cash crunch comes as a milestone in the project nears completion. Work restoring the south side exterior of the building, which faces a parking lot, is expected to be completed this month.

The station was built in 1889 to serve the Long Island Rail Road until officials closed it in 1999, according to the U.S. National Parks service. The LIRR sold it to Oyster Bay in 2005 for $1, stipulating it be used for a public purpose. The museum is around the corner from the station on Audrey Avenue and is undertaking the restoration under an agreement with the town. When finished, the museum will move into the restored station.

In 1902, after Roosevelt became president and began going back and forth between Washington, D.C., and Oyster Bay, the original station got an upgrade, said John Collins, a historic preservation consultant working on the renovation.

“All kinds of people kept coming to Sagamore Hill, the summer White House, so the railroad decided they really needed to spruce up the little Victorian station,” Collins said. “And they completely rebuilt it.”

Restoring it to how it looked when Roosevelt’s train pulled in has meant poring over historical photos, matching roof shingles and even taking a walk on the Bayville shore — as some of the exterior stucco around a window was originally fashioned from oyster shells that had to be replaced.

“I walked up and down the beach with my shopping bag and picked up oyster shells,” Collins said. Those shells are now part of the station.

Once the southern exterior is completed, work begins on the other sides and eventually restoration of the interior. How long it takes to finish will depend on raising enough funds.

“Nonprofits are struggling with what to do with fundraising in particular because a lot of them really rely on the fundraising,” said Adia Colar, spokeswoman for Candid, a Manhattan-based nonprofit that provides information for nonprofits.

Nonprofits need to look for alternative ways to ask for financial support because of the pandemic, Colar added. “It’s more important than ever …  for nonprofits to communicate with their community, to be transparent, to let people know what they need from them, because many will help.”

1999 Station went out of service