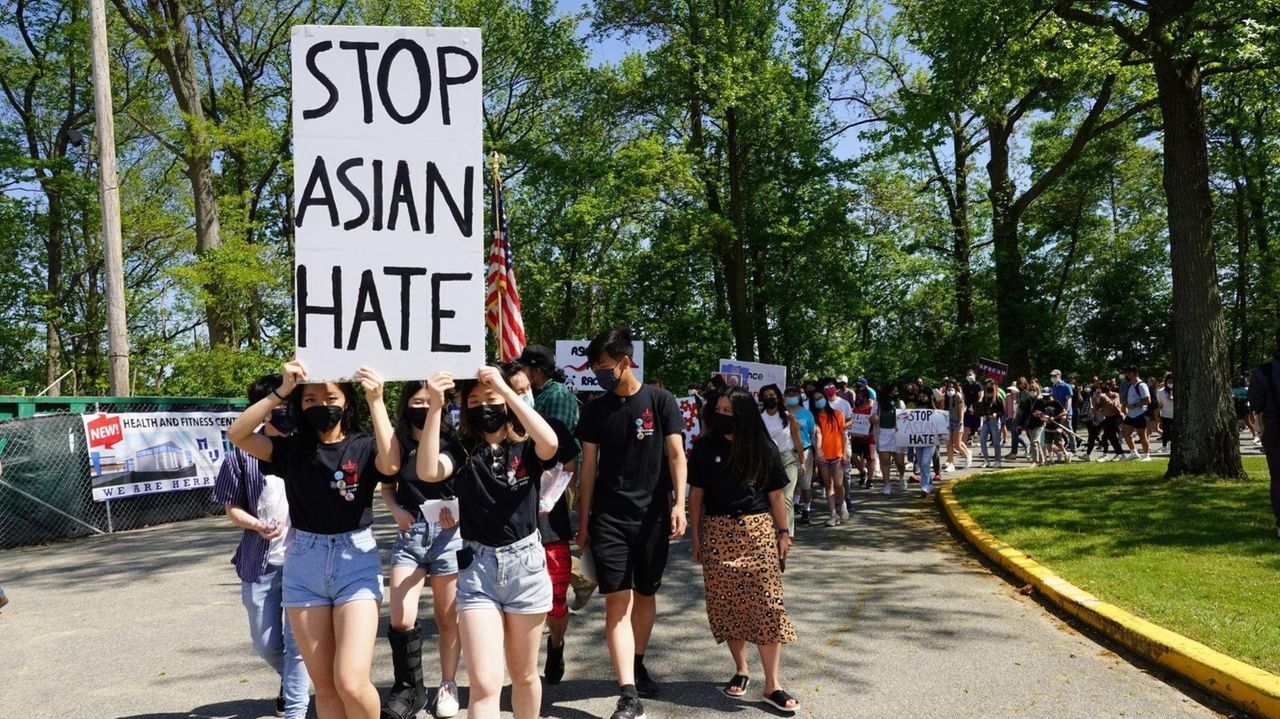 State Sen. John Liu (D-Queens) spoke at a student-organized demonstration against anti-Asian hate crimes, which have surged during the COVID-19 pandemic, that was held at Herricks High School on Saturday. Credit: Debbie Egan-Chin

More than 100 people rallied Saturday at Herricks High School in a student-organized demonstration against anti-Asian hate crimes that have surged during the coronavirus pandemic.

"COVID-19 has given racists another excuse to justify their hateful sentiments," student Madison Chiu, 18, told the crowd. " . . . We have been subjected to angry tirades, attacked while simply waiting for the train, and our businesses have taken devastating hits."

Chiu is a member of the Asian American Cultural Club, which organized the event with the backing of other Herricks groups, including clubs representing Black, Latino, Muslim, Chinese and Korean students and cultural traditions.

David Xiang, 17, president of the Asian American Cultural Club, noted a long history in the United States of anti-Asian bigotry and stereotyping, and said the stand against anti-Asian hate was a message both for the wider community and Asian students themselves.

"For those that feel attacked by the recent hate crimes, it’s important that they see school as a safe place, and that the school stand up against this and for API [people] and against API hate," he said, referring to Asians and Pacific Islanders.

Fino Celano, the superintendent of the Herricks School District, was one of several school and regional elected officials who showed up in support of the students.

"As educators, it’s very important that we not remain silent, that we stand shoulder to shoulder in support of all of our students to be accepted, to be valued, and to oppose any form of violence," he said.

State Sen. John Liu (D-Queens) called the violent attacks, cruel jokes and verbal taunts that Asian Americans have endured a "secondary virus for which there is no vaccine, this virus of hate and bigotry."

He excoriated former President Donald Trump and others who blamed China and Chinese people for COVID-19 and, as Trump has done, used terms such as "China virus" to describe the coronavirus and disease — terms that Liu said are part of the scapegoating of the Asian community.

On Sunday, the Herricks Chinese Association, which serves communities near the high school, is co-sponsoring a self-defense class on a high school field, said association co-president Christine Liu, who is not related to the state senator from Queens. All 120 slots were reserved within two days, and 60 more people are on a waiting list, she said. An earlier online safety and self-defense event drew 350 people, she said.

"That really shows the fear people have," Liu said.