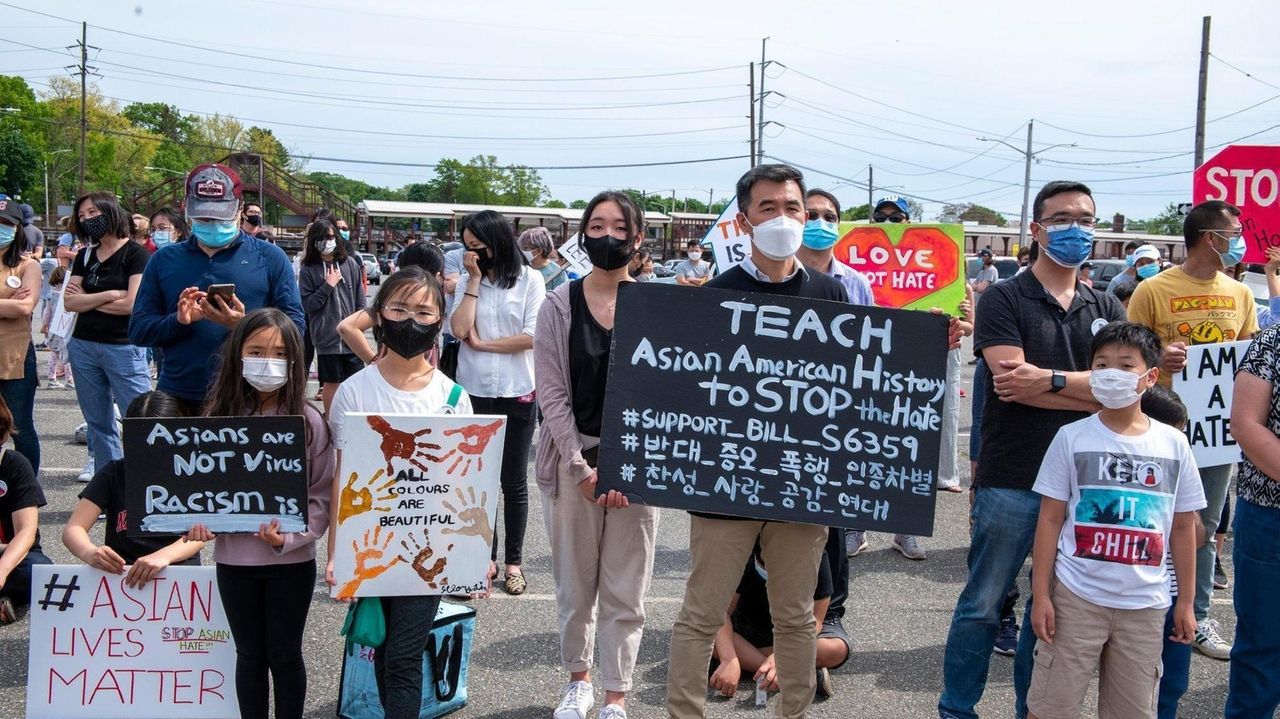 A rally for AAPI Heritage Month was held in Syosset Sunday, as the Syosset Central School District says it is investigating an allegation of "race-based verbal and physical harassment" of one or more students at South Woods Middle School during recess earlier this month. Credit: Howard Simmons

More than 200 people gathered at the Syosset train station Sunday to call for action against attacks on Asian Americans nationally, a week after the Syosset Central School District said it is investigating an allegation of racial harassment in a middle school.

Alan Huang, 15, one of the organizers, said the student-led rally was not based on an incident earlier this month in which one or more students were allegedly harassed during recess with race-based language. He said it was a celebration of the Asian American and Pacific Islander Heritage Month in May.

"We want it to be about self-reflection and what we can do as the Asian American community and be better as a whole," said Huang of Syosset. "Instead of focusing on what others shouldn’t do … our general message is love, unity and action."

"Our community has experienced a lot of hurt in the past few months," she said at the parking lot of the train station. Also, "we recently had an incident in South Woods that really provoked our community and brought a lot of turmoil. And we feel … now more than ever is the time to bring the message of love and unity."

Syosset Superintendent Thomas Rogers, who did not mention the investigation Sunday, told the crowd that there’s work to do.

"Our schools have a role to play," Rogers said. "We can teach about Black history and Asian American and Pacific Islander history not just in February and May but throughout the school year. It is not a subset of American history. It is American history."

Rogers had said at a recent school board meeting that "there were multiple incidents" involving students verbally expressing bias, including one that "became physical."

The biggest applause of the two-hour-long rally came when State Sen. John Liu (D-Queens) called on the school district to act.

"I’m so proud of everybody here saying: ‘No, no more hate.’ And we are not just saying no more hate, but we need action," Liu said. " … The hate is not just going to go away. … Continue the action. Continue the pressure. Speak up. Never let anything get swept under the rug."

Al Poon, 45, who made a sign saying "I'm not Bruce Lee," said the Chinese American martial artist was frequently evoked in his presence at playgrounds or on basketball courts when he was growing up.

The father of two said. "I want to be viewed as [a person] as opposed to a Kung Fu master."

Sunday was the first time Poon and his wife, Peggy Mau, attended a rally. The Syosset couple also brought their two daughters age 13 and 10.

"We want more exposure," Mau said. "You can’t push us off to the side and pretend everything is OK when it’s not."

"We were too much in the background sometimes," Poon said. And that, he said, needs to change.