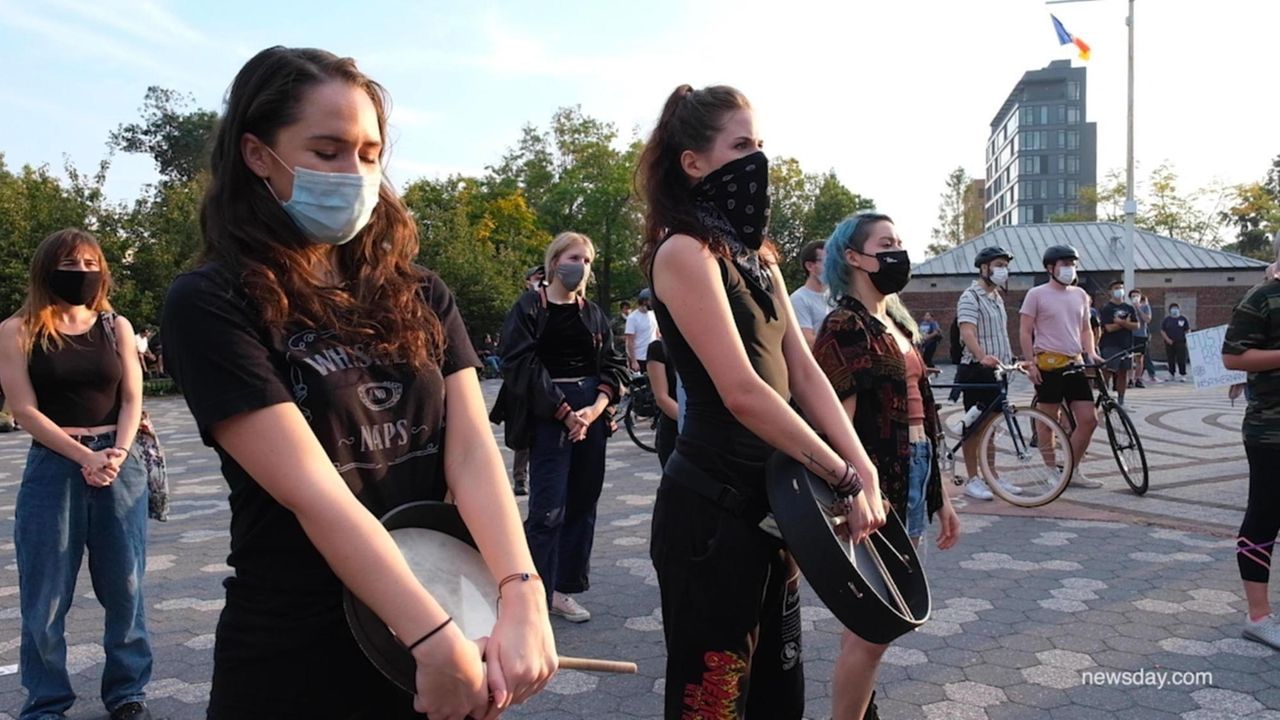 From rallies in Hempstead to protests in Brooklyn and Manhattan, people came together to demand justice for Breonna Taylor who was killed in March when Louisville police entered her home on a no-knock warrant during a drug investigation. Credit: Newsday / Chris Ware, Matthew Chayes; Jeff Bachner

Rallies were held on Long Island and Manhattan on Friday evening to honor Breonna Taylor, the young woman shot to death in a botched police raid in Kentucky this spring.

On Wednesday a grand jury indicted only one of three officers involved in the shooting, setting off protests demanding justice for Taylor.

It was a slow start to the event on the steps of Hempstead Town Hall on Friday evening.

At first it was only one person, then seven but eventually the crowd grew to about 20, ranging in age from high school students to people in their 60s. There were Black people and white and Hispanic. They chanted, "Say her name — Breonna Taylor" and "Black Lives Matter."

Angelique Contreras, 53, of Uniondale, was among them and said as a Black woman, she is tired of the violence affecting her community.

In Manhattan, a vigil for Taylor started off just after sunset as planned. The assembled group raised their fists in silence for 8 minutes and 46 seconds — to demonstrate the length of time the Minneapolis cop who killed George Floyd in May knelt on the man’s neck. Afterward about six dozen participants marched around the Upper East Side neighborhood where Mayor Bill de Blasio lives.

Late Friday night, hundreds of marchers took to the eastbound traffic lanes of the Brooklyn Bridge from Manhattan, with police acquiescence, heading further into Brooklyn with cops following behind.

They marched and biked to Brooklyn Borough Hall and protested on the building steps.

Taylor, a Black 26-year-old emergency room technician from Louisville, died after she was shot six times by white officers who entered her home on a no-knock warrant during a drug investigation.

The Kentucky grand jury indicted now-fired officer Brett Hankison on three counts of first-degree wanton endangerment, a Class D felony for his actions during the raid. The other two officers remain on the job. No one was charged for causing Taylor's death.

The warrant in Taylor’s case was linked to a suspect who did not live in the home and no drugs were found there. Prosecutors said the officers were justified in using force to protect themselves after Taylor’s boyfriend fired at them.

Kentucky Attorney General Daniel Cameron said the decision was based on Hankison firing rounds from his weapon that went into a neighboring apartment and put those residents in danger.

Taylor's name was often mentioned in protests across the country this spring and summer during marches against police brutality and systemic racism spurred by the May 25 death of Floyd.

At the Hempstead protest, Kim Costa, 62, of the village, said she has been attending multiple protests against police brutality since June.

She said the last few months have been stressful for Black people like herself.

Costa said there was no justice served for Taylor.

Anthony Liddie, 20, of Hempstead, with the educational grassroots group "Voices of Uniondale," and organizer of the Hempstead event, said Friday‘s event was less a protest and more a rally to show appreciation for the "essence" of Taylor.

Liddie, a junior at Columbia University, said Taylor’s name and image have been used as memes, and she has become a martyr, but, "We have not given her enough community love in order to recognize her name," he said.

Friday evening as the Manhattan protesters raised their fists in silent protest, a motorist pierced the silence with a message of his own.

"Get over it already!" he shouted as he passed the group on East End Avenue.

Experts predict COVID-19 will be around for years to come
1:34
Pandemic-fed slowdowns limit what's for lunch at school
Fauci: Pfizer COVID-19 vaccine could be available for children in early Nov.
Threat leads to canceled Valley Stream homecoming events, district says
Man who died of Legionnaires', others hospitalized lived on same block
1:36
Majority of LI educators earn at least $100,000 annually, report shows
Didn’t find what you were looking for?