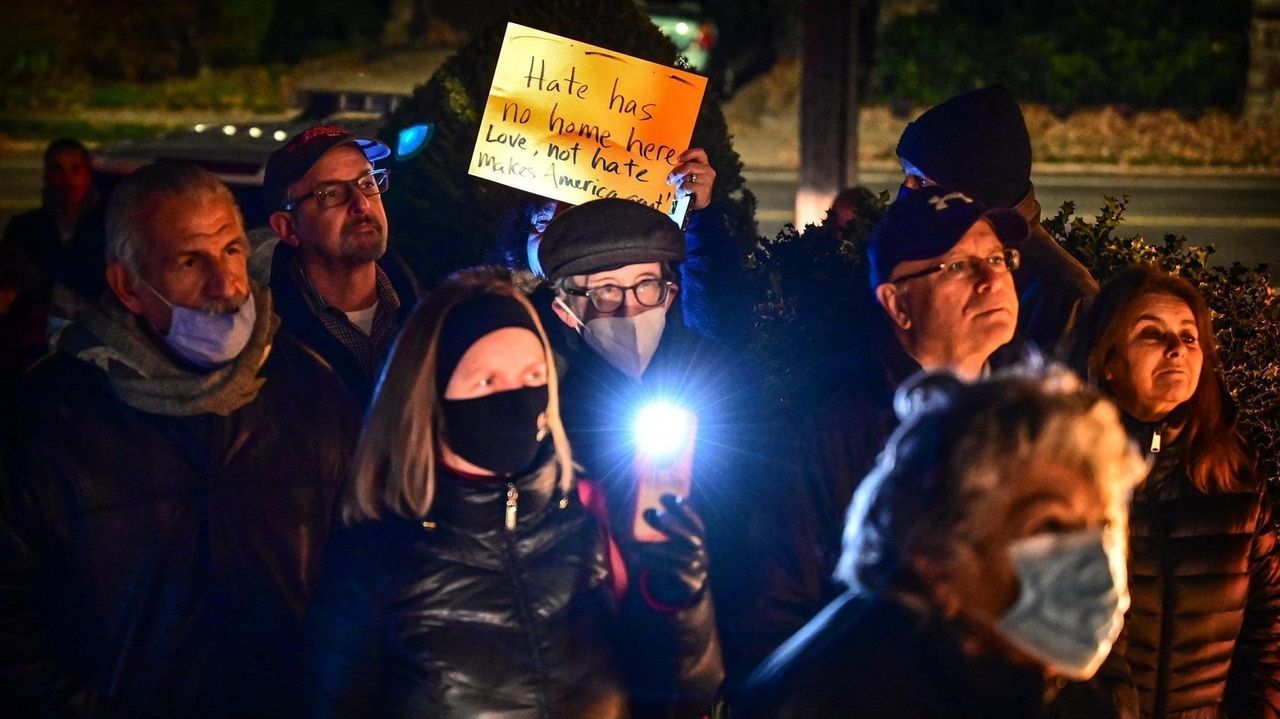 Local officials and community members gathered outside the Central Synagogue - Beth Emeth in Rockville Centre on Wednesday condemning hate and the Proud Boys group that marched through the village without a permit over the weekend.  Credit: Newsday / Thomas A. Ferrara

Nearly 100 people and Rockville Centre local officials gathered outside the Central Synagogue-Beth Emeth on Wednesday to condemn a neo-fascist group that "invaded" the village streets without a permit over the weekend, leaders said.

Those in attendance chanted "Hate has no home here, not now, not ever."

Village Mayor Francis X. Murray said while residents have stood together in harmony "for decades," the Proud Boys "invaded our downtown trying to disrupt our beliefs and cause a divide in our harmony as a community."

"It’s not going to happen here," he said during the rally. "It’s impossible because you the people will not let this redefine who we are … we continue to be united as one village."

Rena Riback, founder of the Anti-Racism Project based in the village, said the Saturday march was "offensive."

"This is a neighborhood where we’re trying to build community," she said before the rally. "To have an outside force come in was disturbing."

"If you have hate within your midst, you got to speak up," she said. "The day you remain silent is when that group wins."

One person in the crowd held up a yellow sign that read on one side, "Love not hate, makes America great" while the other side read, "Hate has no home here."

The rally comes after about 20 members of the Proud Boys marched through Rockville Centre on Saturday flashing white power hand signals.

The protest by the Proud Boys, who are designated as a hate group formed in 2016, according to the Southern Poverty Law Center, was done without a permit, the mayor had said. Rockville Centre police were stationed on the street, monitoring the demonstrators and controlling traffic.

The group of mostly men marched down Sunrise Highway on Saturday, waving "Don’t Tread on Me" and American flags and playing music from the back of a pickup.

Some members, who wore bandannas over their faces, went to the village's downtown business district on Park Avenue, where they entered stores, shouted slogans and handed out flyers.

The Southern Poverty Law Center, which tracks extremist organizations, describes the Proud Boys as a group denying any association with the "alt-right" movement but noted it has shown a history of white nationalism.

Several Proud Boys members and supporters of the New York and national chapters have been arrested in relation to storming the United States Capitol on Jan. 6 in an attempt to stop the certification of Joe Biden's victory over then-President Donald Trump.