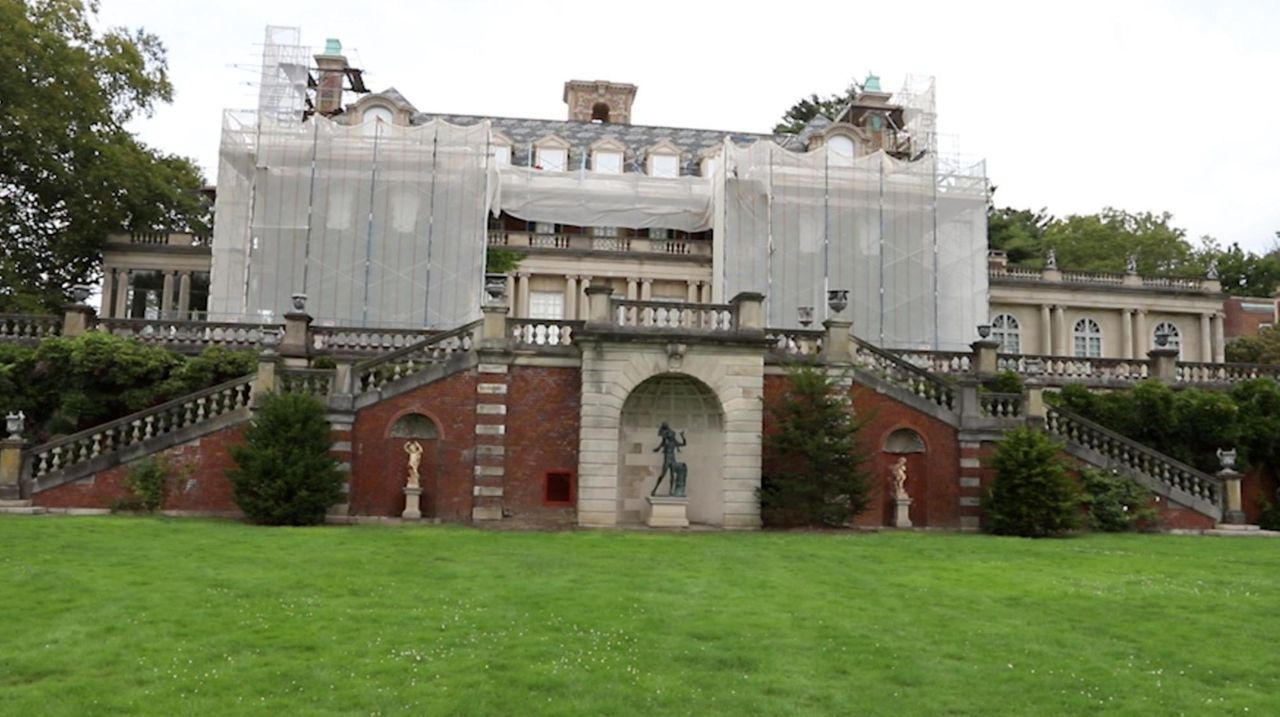 It took several decades of patience but just one stroke of luck for Old Westbury Gardens to nab the perfect material to top off the estate's main attraction, the Westbury House.

The Charles II-style mansion, built in 1906 for steel heir John Phipps and his wife, Margarita Grace Phipps, will have its 111-year-old roof replaced with Collyweston stone slate as part of a larger restoration project that began in March. The Collyweston came from deep within a mine in central England that had been closed for decades. It fortuitously reopened two years ago thanks to the University of Cambridge.

Collyweston is so rare and special that it begins to glow as it ages.

"As the stone is exposed to oxygen and starts to oxidize, over a couple of years it starts to turn this really sort of yellow, golden color, which is really quite lovely," said Lorraine Gilligan, the gardens' preservation director.

Officials said the $1 million roof replacement will be completed in early 2020 and is funded by two state grants.

It took four months to create about 27,000 Collyweston slates and ship them to Long Island in 60 wooden crates.

Old Westbury Gardens officials are now waiting for specialists from the United Kingdom to fly to New York and complete the work. The British craftsmen are expected to arrive by year's end and take three months to install the stone, Old Westbury officials said.

The "slaters" must be on hand to install the Collyweston, Gilligan said, because only they know how to work with the slates, which sometimes aren't uniform in size.

"The experienced slaters are able to visually assess how to compensate for these differences using small stone shims and lime putty," Gilligan said. "There is a distinctive rhythm to the installation as slates are accepted or rejected and the slaters fit one tile next to the other."

Westbury House has needed a new roof for at least four decades, but it has been difficult finding a suitable roofing material, officials said. Old Westbury Gardens staff contemplated using a cement-based version of Collyweston or a granite slate, but eventually settled on the English limestone.

"The challenge for us was finding the right material," said CEO Nancy Costopoulos.

The mine in England that generated Collyweston had been closed for more than 40 years, Gilligan said. Then, Old Westbury Gardens caught a break, she said. A few years ago, the University of Cambridge ordered about 150,000 square feet of roofing made of Collyweston stone slate, she said. The order prompted the mine owner to reopen in January 2017, Gilligan said.

"We were waiting for one of the projects at Cambridge to be completed, then we were next on the list," she said.

Elsewhere on the estate

Preservationists are also completing other work at the Westbury House, including restoring the servants' wing, repairing the gutters and drainage systems, and restoring the terra cotta cornice. The terra cotta is "like a decorative headband right before the end edge of the roof," Gilligan said.

The restoration effort is expected to finish in April.

Elsewhere on the estate, workers have installed a new roof on the Thatched Cottage, which sits about a dozen yards from Westbury House. The cottage was John Phipps' eighth birthday gift to his only daughter, Margaret Helen Phipps (Peggie), but is now used as a children's play area. The roof is made of water reeds from Russia and Turkey, the best sources in the world for the material, officials said.

Another group of preservationists has spent weeks covering furniture, walls and books with cloth and plastic sheets to make sure the roofing work doesn't coat the mansion decor with dust. Officials have also taken 16 mirrors off the walls and cleaned them. Some of them are 6 feet tall and all have elaborate, decorative frames that were handcrafted more than a century ago.

"We vacuumed them out first and now we're using an aqueous solution," said Lucie Kinsolving, a Manhattan-based paintings conservator hired for the Old Westbury Gardens restoration. "They've been on the wall for 100 years, and some of them were really high."

Old Westbury Gardens will remain open during the restoration project, although some sections of Westbury House will be closed off until April.

111 / Age of the existing roof at the Westbury House

16 / Framed mirrors taken down and cleaned at the Westbury House

800 / Pieces of terra cotta, or fired clay, that will be used to rebuild the terra cotta cornice at the Westbury House