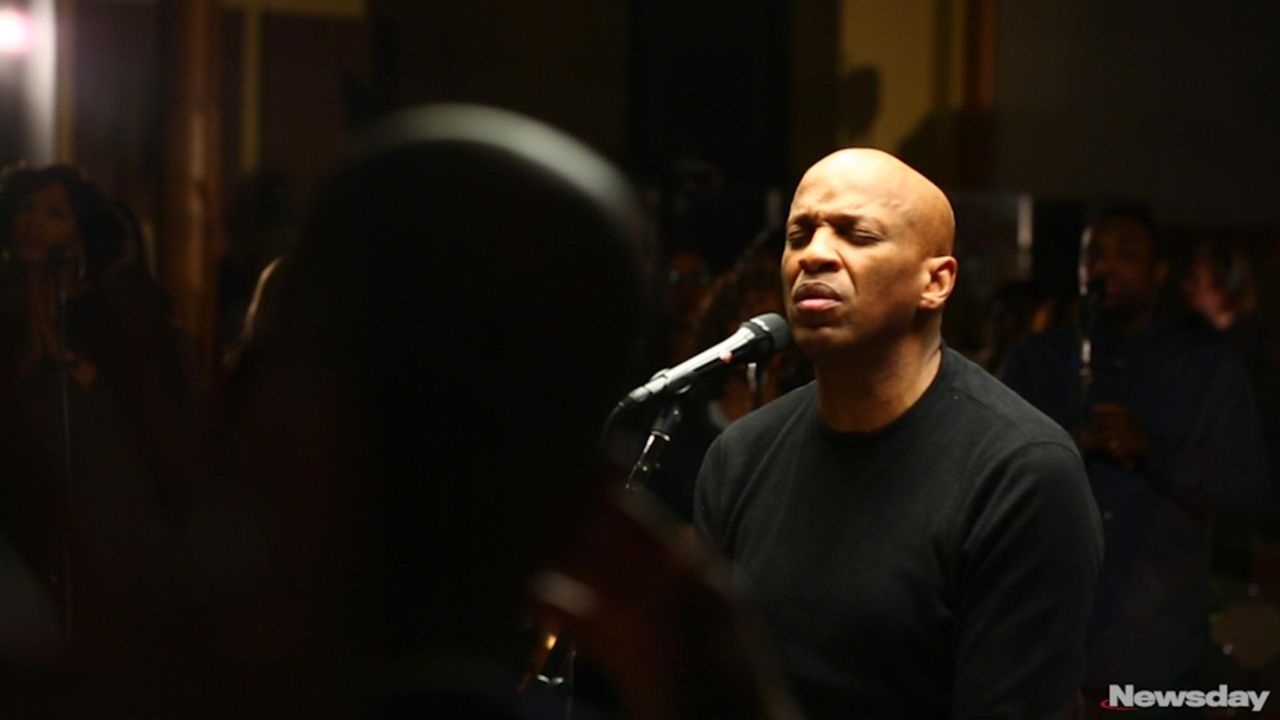 Gospel music star Donnie McClurkin, who is the pastor of Perfecting Faith Church in Freeport, is getting ready to celebrate the 15th anniversary of his Easter service at Hofstra University's gym on Sunday, April 16, 2017. It will be the largest such worship service on Long Island, with an estimated 5,000 people expected to attend the service at Hofstra University's gym. Credit: Newsday / Chris Ware

International gospel music star Donnie McClurkin is hitting some of the highest notes of his life.

The Freeport-based, globe-trotting preacher is preparing for the 15th anniversary of his Easter Sunday service — now the largest such ceremony on Long Island, expected to draw 5,000 people to the gym at Hofstra University on April 16.

His single “I Need You” soared to No. 1 on the gospel music charts in mid-March.

And the lifelong bachelor plans to be married in December to contemporary Christian music star Nicole C. Mullen.

At 57, the winner of three Grammys said he is aiming to devote more time to his congregation at Perfecting Faith Church in Freeport and his new blended family. Days before Palm Sunday, McClurkin and Mullen gathered at the church with his band, backup singers and congregants to shoot a video for his hit single.

“I’ve got to start mitigating all this traveling,” said McClurkin, who regularly travels across the United States, as well as to Africa and other continents, to preach and sing. “With the coming nuptials and blended family, there’s got to be time. . . . For the last two to three decades, I’ve been running with no hindrance.”

The charismatic singer, who has sold more than 10 million albums worldwide, said it has taken him so long to marry partly because he was afraid of failing in the relationship, and partly because he never knew if women were seeking him because of true love or his fame.

McClurkin, accompanied by several of his sisters, started his singing career as a teenager on a street corner in Amityville that was frequented by drug dealers and prostitutes.

He had a troubled childhood, during which he says he was sexually abused by male relatives and dropped out of Copiague High School because of bullying. He said he lived for years as a gay man but later decried homosexuality.

While a famed singer, he also is a pastor. Six-foot-three and thin, with a street-smart persona often reflected in his comments from the pulpit, he ministers to everyday congregants at Perfecting Faith as well as the poor, drug addicts and gang members.

Though he has performed for United States presidents and Nelson Mandela and has sung on Oprah Winfrey’s show, “none of that stuff matters when they come to that side door to get food” at the church in Freeport, he said, referring to those seeking assistance.

He is constantly on the go, typically flying out of New York on a Thursday and getting back just in time for Sunday morning services at Perfecting Faith. In February, for example, he was in Nigeria, performing for hundreds of thousands at an outdoor gospel festival.

This year’s Easter service is his 15th annual since starting Perfecting Faith in a dilapidated, former C-Town supermarket on North Main Street in Freeport, near Roosevelt. A decade ago, with crowds growing, the location shifted to Hofstra.

“It’s been wonderful to see how it incrementally grew from this small place with maybe 100, 200 people to like 5,000 people now,” he said.

McClurkin has bigger plans. Within the next five years, he said, he hopes to unite with other local churches and hold the Easter service at the renovated Nassau Coliseum, with more than 10,000 people attending.

It’s part of a renewed focus on Long Island, going hand-in-hand with his plans for married life with Mullen, 50, a former high school track runner who lives outside Nashville, Tennessee, and has her own successful music career.

The two have known each other for 15 years, he said.

“The most we ever said while we were passing was, ‘Nicole, how you doing?’ ” he said. “ ‘Building character’ was her answer every time.”

In December 2015, they found themselves sitting next to one another on a flight to the Ivory Coast, and they talked for seven hours.

It was the start of a romance.

“I just watched him as he was coming down the aisle on the plane, and people were stopping him left and right. And I knew he had to have been tired, but he stopped for every single person. He greeted them,” Mullen recalled of that trip. “He regarded them as if they were friends already. And in our industry that’s huge, because everybody doesn’t do that anymore.”

Connecting with McClurkin “has been an answer to my prayers and my hopes and my dreams,” she said. “This has been my 50th year of life, so for me it’s like a new beginning. It’s like a year of jubilee.”

Mullen has three grown children from her second marriage, while McClurkin has a teenage son from a previous relationship and a grown adopted daughter. He said he has bought a house on the Island where they can all live together.

As McClurkin ponders the changes in his life, he is thinking about who eventually will lead the church he has built.

After decades of gospel music performance around the globe, he said, “Now it’s about slowing all this stuff down. There’s a whole new generation of singers out there. Now it’s time to sit back and support them and realize your time has come to talk of other things.”

Church “is not just a spiritual entertainment center on Sundays or Saturdays,” McClurkin said. “It’s a place where people come to have their lives changed.”