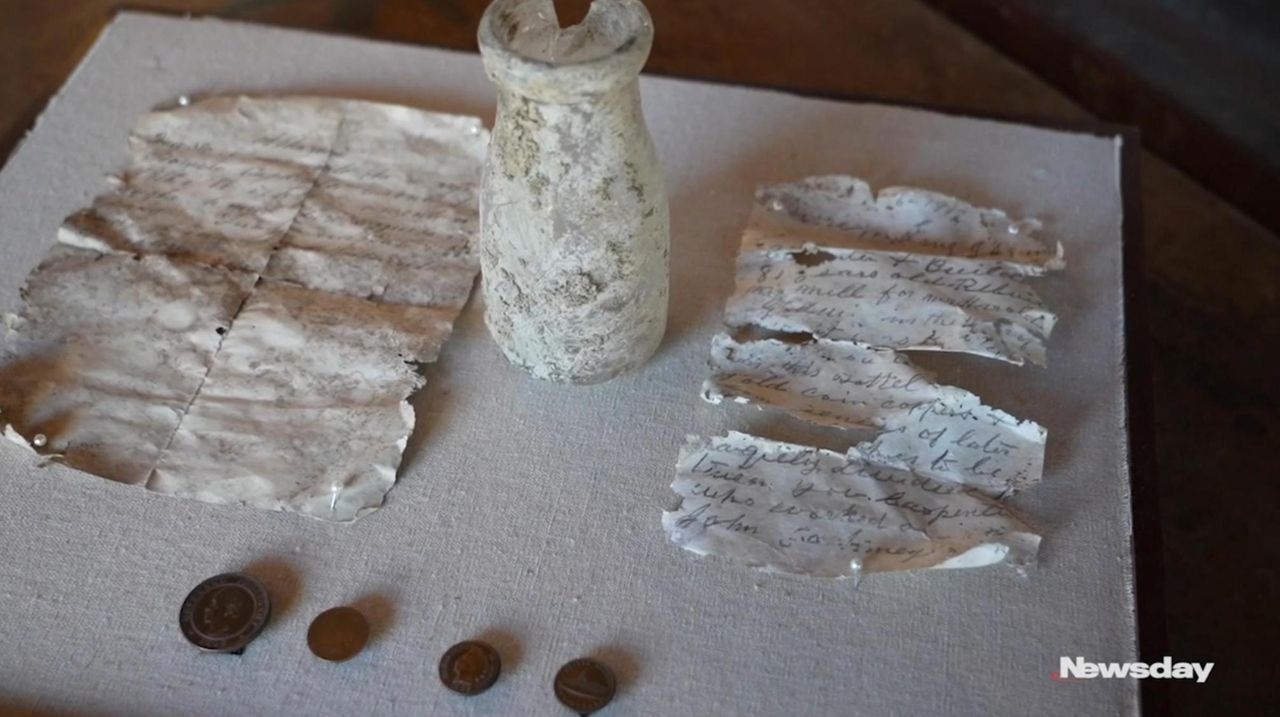 A construction worker found a bottle, coins and two messages that are over 100 years old during the restoration of the historic Roslyn Grist Mill. Credit: Corey Sipkin

A crew working to restore a centuries-old gristmill in Roslyn discovered a pair of messages left by two men who worked to preserve the same building more than 100 years ago.

George Gorski, 48, a carpenter at Woodbury-based E&A Restoration, found the two letters and four vintage coins in an old milk bottle encased in a concrete slab Oct. 14 at Roslyn Grist Mill. The 18th-century Dutch-framed water mill on Old Northern Boulevard has been under restoration since late 2018.

"It ties together 104 years of restoration," said Howard Kroplick, president of the Roslyn Landmark Society in charge of the effort.

The two men behind the 1917 time capsule were part of a team tasked by Harold Godwin, poet William Cullen Bryant’s grandson, to turn the then-abandoned mill into a museum of industrial arts.

One letter was written in Italian by mason Romolo Caparrelli and another in English by carpenter and builder Stephen Speedling.

Beyond his acknowledgment of his co-workers and Godwin’s efforts, much of Speedling’s letter was unreadable.

Caparrelli’s script, however, was mostly preserved and recently translated by Andrea Fedi, an associate professor of Italian and Cultural Studies at Stony Brook University.

"This is a gift that I am giving you. Romolo Caparrelli invented the planking-style concrete roof and walls installed in 1916 and ’17. So remember us," part of the message read.

Fedi said he didn’t think Caparrelli meant to suggest he had invented a new cement mix or a different kind of concrete structure, but that he had worked on the exterior without a blueprint and executed the project without the help of an architect or engineer.

The text came from someone who was proud of his artisan craft and wanted to be remembered, he said.

Caparrelli, who was born in Pico, Italy, and interred in Roslyn Cemetery, also placed his initials in the stucco by the front entrance of the gristmill.

Pamela Story of Simpsonville, South Carolina, and formerly of Lattingtown, remembered her father taking her to the building to see the initials of her grandfather.

"It is regrettable that as we get older, we realize what life stories never get told," said Story in an email, noting she didn’t know much about her grandfather since he died when she was 5.

What Story heard from family members was that Caparrelli built his home on 63 Villa St. in Roslyn Heights around 1921 primarily out of concrete and would not let any frames or pictures to be hung on the walls — what he considered his work of art.

Stephen Speedling, the man who wrote the other letter, was a well-known Roslyn builder whose family roots can be traced back to Francis Speedling, a Hessian soldier who settled in the Roslyn area after the American Revolution, according to Myrna Sloam, the Bryant Library’s former archivist.

When the restoration is completed, Kroplick said, the society plans to display the letters and coins at the educational center on-site.

"It shows you people were trying to preserve history back then, and we are continuing to do it today," Kroplick said.

What was in the milk bottle