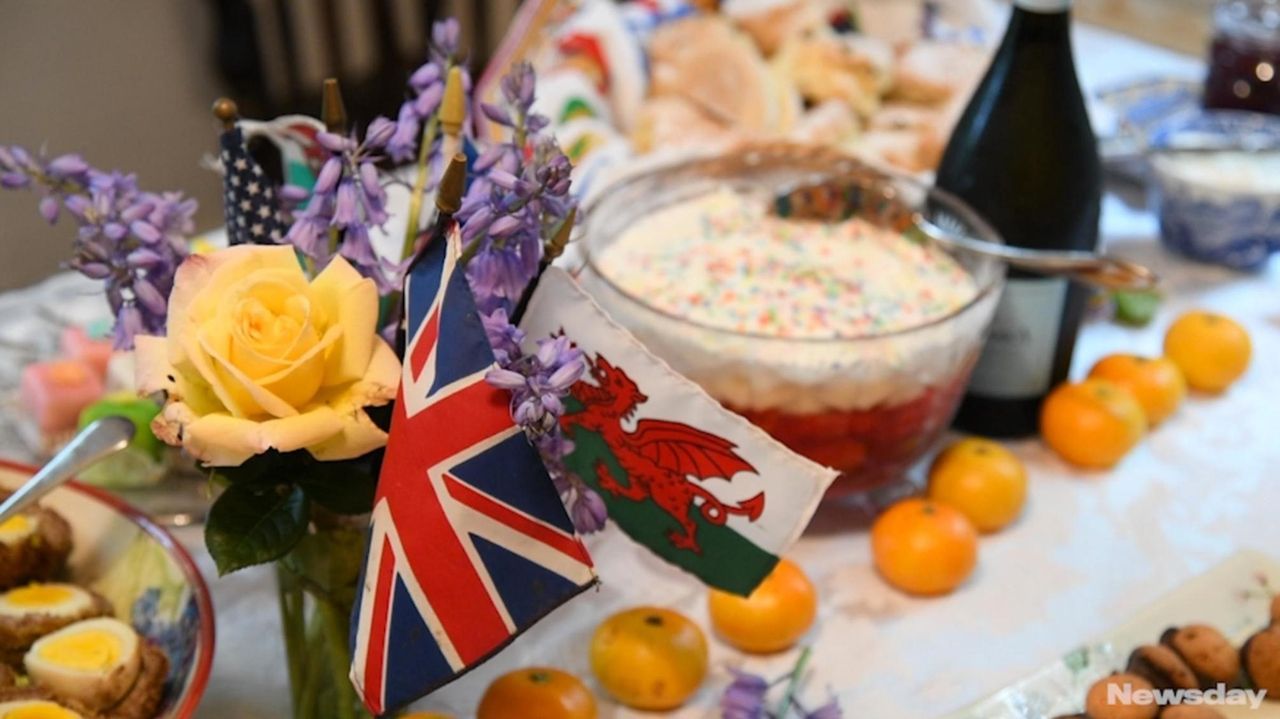 They oohed at the bride’s white dress. They aahed when the groom looked at her lovingly. And they raised champagne glasses to toast the happy couple.

As tens of thousands gathered in England and millions around the world watched on television, a contingent of 10 friends gathered to view the royal wedding Saturday at the Port Washington home of Barbara Miller.

Miller, a British native with dual citizenship, decorated her home with Union Jacks and set a table brimming with British fare — raisin scones and jelly, cucumber sandwiches, and Scotch eggs, which consist of a hard-boiled egg wrapped in sausage and then fried.

Several of the group have been friends for years, if not decades. Some have been to each other’s wedding. All share a love of all things British.

And as they watched this wedding, they recalled other touchstones of their shared affinity — the weddings of Prince Charles and Diana Spencer and of Prince William and Kate Middleton; William and Harry, then just boys, at their mother’s funeral.

“It really touches you,” said Miller, as she sat in her living room, her friends gathered in a circle of chairs around the TV, several of the women wearing fancy hats and pearls.

Some in the group commented thoughtfully that the coming together of Prince Harry and American actress Meghan Markle — biracial and divorced — marked a new age in royal weddings, one very much of these times.

“I like her being an American,” said Elly Shodell, 74, of Port Washington. “I like seeing a woman of color becoming a part of the royal family.”

Miller and her friends on Saturday were willingly transported to a fairy-tale world of elegant carriages, royal trumpeters and gussied-up celebrities.

“It has been difficult times, with a lot of bad, ugly and cruel things happening,” said Tegwen Epstein of Port Washington. She pointed to yet another deadly school shooting days ago.

“In these very dispiriting times, it’s nice to have a day of joy, beauty and delight,” she added.

Throughout the broadcast, the group kept up a running commentary of critiques, lavish praise and personal reflections.

“I think she’s lovely,” Epstein said of the bride. And everyone agreed her dress was both simple and elegant.

Several said they were impressed by the diversity of the wedding, which included an address by the Rev. Michael Curry, the first African-American to be elected presiding bishop of the Episcopal Church.

Tom Donoghue though, thought he “went on a little long.” He and his wife, Dorothy, have been friends with Miller for nearly 50 years. The Port Washington couple once accompanied Miller on a hiking trip to Cornwall.

This royal viewing party took place at noon, via a recording of the actual ceremony, which started at 7 a.m., Long Island time. Because the women are — as one said, with impeccable British tact — of a certain age, they felt that was too early to get together to watch in real time.

For Miller, the occasion took her back to her childhood in Britain, hearing the old hymns in church and seeing the Queen Mother — Queen Elizabeth’s mother, that is — at a cathedral.

“I was 13 and we were all given flags to wave,” Miller recalled. “She wore a pale blue suit and hat. It was lovely.”

Watching this royal wedding with longtime friends had an added benefit, Miller said.

Members of the group know that, as they get together down the line, they are sure to recall this day, again and again.

Prince Harry tells Meghan: 'You look amazing' at altarPrince Harry and Meghan Markle gazed into each other's eyes Saturday at the altar in ... What would the royal wedding look like on LI?We asked local event planners to design a royal affair, Long Island style. Here's what they had to say. See British royal wedding photos through the yearsWith Prince Harry and Meghan Markle's wedding fast approaching, take a look at other royal nuptials within the British royal family.