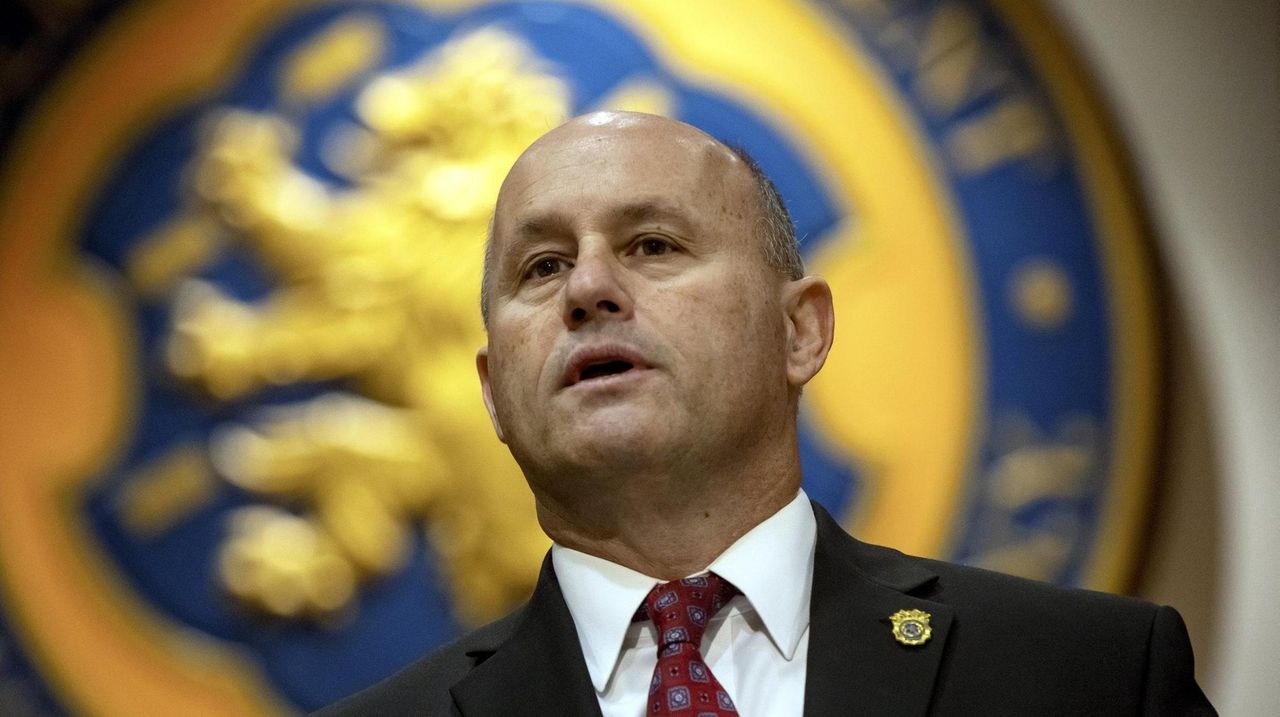 A coalition of civil rights and police fraternal organizations on Thursday publicly called for Nassau County Police Commissioner Patrick Ryder to resign for comments he made in Newsday that linked the county’s failure to hire more Black and Hispanic police officers to the prospective job candidates coming from "broken homes."

Nassau County Executive Laura Curran should fire Ryder if he doesn't resign, the officials said, citing what they said was a pattern of Ryder showing insensitivity to issues of racial disparities in policing.

"At this point, the commissioner of police for the county of Nassau should resign ... he should submit his resignation immediately," said civil rights attorney Frederick K. Brewington, of the Long Island Advocates for Police Accountability, an advocacy group created to help implement reform in policing on Long Island. "This is a commissioner who has shown over and over again that he cannot appropriately address the needs of diversity and race in the county of Nassau as the leader of the Nassau County Police Department."

Brewington, who spoke at a news conference outside his Hempstead law office, was joined by officials from the Grand Council of the Guardians, a police organization representing Black officers; the National Latino Officers Association; Long Island United to Transform Policing and Community Safety, one of the organizations that authored a community-led police reform plan; the National Organization of Black Law Enforcement Executives and the Long Island Progressive Coalition.

The news conference represented a growing chorus of calls for Ryder’s resignation. The advocates warned that they planned to exert continued pressure on Curran to remove Ryder. Curran, a Democrat who reiterated her support for Ryder on Thursday, is seeking reelection this fall.

"When does someone stand up and say, ‘county exec, it’s time to make some changes,’ particularly in an election year that’s coming up," said Charles Billups, chairman of the Grand Council of Guardians, a Brooklyn-based fraternal organization of Black officers. "She needs our votes; she needs our support to continue running this county."

A spokesman for Ryder did not respond to a message seeking comment Thursday.

Ryder's comments were reported as part of a Newsday investigation last month that showed that Nassau County hired just 36 Black police officers from a pool of 2,508 Black applicants who had taken the 2012 police test. Of 3,389 Hispanic applicants from the same test, 89 were hired.

Black and Hispanic candidates were eliminated from contention during the hiring process, which includes a physical fitness test and a background investigation, at higher rates than their white counterparts despite decades of federal monitoring by the U.S. Justice Department.

Dennis Jones, a retired NYPD detective and member of Long Island Advocates for Police Accountability, spoke from a personal perspective on how Ryder's comments had impacted people of color: "I am a retired detective from the NYPD and I’m also from a broken home, as put by Police Commissioner Ryder. Myself and my brother, however, were able to get into the NYPD and serve 25 years."

Anthony Miranda, the founder and chairman of the Queens-based National Latino Officers Association, said Ryder's comments were "racist and clearly discriminatory" and make him unfit to serve as commissioner.

"We’re getting a lot of training on implicit bias, right? And here’s the police commissioner who is making statements that clearly indicate a clear bias against certain communities. That speaks for itself."

While several groups spoke out against Ryder Thursday, at least two Nassau-based organizations expressed support for him.

Victoria Ojeda, a Nassau police officer and president of the Nassau County Police Hispanic Society, in an email distanced the group from the National Latino Officers Association and said it was not calling for Ryder to resign "at this time."

"Commissioner Ryder has always been supportive of the Nassau County Police Hispanic Society and any endeavor that we pursued," said Ojeda, adding that Ryder had a history of taking his group's recommendations and implementing them "whenever possible."

Ieda McCullough, president of the Nassau County Guardians Association, said in an email that while the group denounced the "stereotypical, racially insensitive comments that Police Commissioner Ryder made … we may not be in agreement with everything that is said by Charles Billups."

"It is our belief that the root of the issue lies within the HIRING process. Starting with recruitment, the applicant investigation process and the Civil Service Commission," McCullough said.

Ryder apologized at a news conference following the publication of Newsday’s story last month. Curran said then she disagreed with Ryder’s comments but said calls for his resignation were unfair.

Curran again expressed her support for Ryder Thursday and touted the 10-member diversity committee she created to address the lack of diversity in Nassau police hiring.

"While I do not believe lack of diversity in law enforcement is tied to family makeup, I support Commissioner Ryder in the department’s diversity efforts and in all he does to keep Nassau County one of the safest communities in our nation. We are committed to building diversity within law enforcement and that is why I am proud to have Bishop Lionel Harvey chairing the Nassau County Police Diversity Committee."

Tracey Edwards, the Long Island regional director of the National Association for the Advancement of Colored People, said in a statement: "We need a leader to fix the racial disparities in Nassau County and Police Commissioner Ryder does not believe his own data. The Nassau County executive and Nassau County legislators have made a choice and it's to continue to embrace a policing system that discriminates against Black and latino residents."

Ryder, in an interview published in Newsday last month, said his parents pushed him to pursue a law enforcement career and drew a parallel between the family life of racial minorities and their success at becoming police officers.

"These kids struggle in these communities because they don’t have both parents around," Ryder said. "They don’t have a family history of law enforcement. And they’re at a disadvantage starting off. And we have to recognize it’s true."

Ryder, while referencing the department’s efforts to recruit in Roosevelt, a predominantly Black and Hispanic community, said: "Look, a lot of these kids come from broken homes. A lot of the kids come from struggles in their neighborhood. And they need that advantage, they need someone to push them a little bit."

Ryder also suggested that the department faced challenges attracting Jews, Asians and Muslims because of what he said were the career preferences of members of those groups."What’s the percentage of Asians that are in the doctor world? What is the percentage of lawyers that are Jewish? You know, these are real facts, real numbers, and they are high on both sides. I have great friends from the Muslim community. And I asked them why don’t you get your son to take the test? He said I want my son to be a doctor. I want my son, my daughter to be a doctor. OK, but respectfully, that’s their choice, not ours. So we lose those candidates."

Ryder added: "I think the process we have is good. I think giving kids a little advantage in minority communities is good, too. They just don’t have it. They don’t have mom and dad."

Brewington said Ryder’s comments to Newsday weren't an isolated incident, "but rather add to a pattern demonstrating his lack of understanding and unwillingness to engage regarding racial disparities in police practices within the department."

Brewington said Ryder’s comments were the "third such incident within the past six months and make clear that he can no longer effectively serve in his current position. Put simply, three strikes, you’re out!"

Brewington pointed to written questions that Ryder responded to in December 2020 when he was asked to acknowledge racial disparities in Nassau police arrests. The statistics show Black people are five times more likely to be arrested by Nassau police than whites and Hispanics are two times more likely. "In neither instance did Commissioner Ryder acknowledge these objective and incontrovertible racial disparities," Brewington said.

Brewington also pointed to a March 22 Nassau County Legislature meeting during which Ryder, according to Brewington, "again failed to acknowledge racial disparities in policing."

Ryder, said, according to a transcript of the meeting provided by Brewington, "not at all" when asked if racial bias plays a role in arrests.

6,539 Black people tried to become police officers on LI. Only 67 were hired.Minority applicants weren't hired nearly as often as white ones in the past decade, and experts see "clear evidence that it is not the people, it is the process" causing the disparity. LI civil rights leaders criticize Ryder comments on lack of diversityLeaders said the Nassau commissioner relied on negative stereotypes of minority families to explain his department's failure to attract more diverse candidates. Ryder apologizes as more condemn his comments to Newsday on hiring diversityThe Nassau police commissioner rebuffed calls for his resignation while apologizing for remarks that Long Island civil rights leaders said negatively stereotyped Black and Hispanic families.