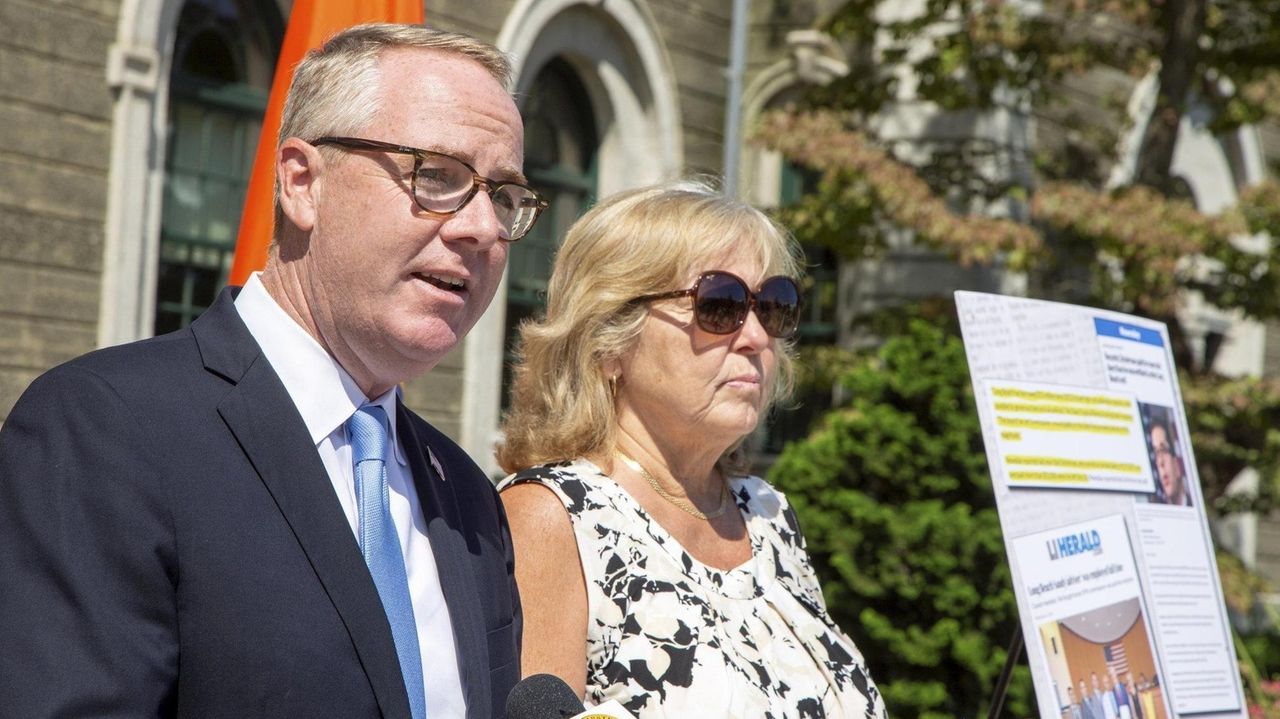 Nassau County Comptroller Jack Schnirman and chief of staff to Town of Hempstead Supervisor Laura Gillen, James LaCarrubba, both Democrats, should resign from their current jobs on grounds they are unfit for public office during a probe into severance paid to them as former officials in the City of Long Beach, Don Clavin, the Republican candidate for Hempstead Town supervisor, said Tuesday. Credit: Howard Schnapp

Nassau County Comptroller Jack Schnirman and chief of staff to Town of Hempstead Supervisor Laura Gillen, James LaCarrubba, both Democrats, should resign from their current jobs on grounds they are unfit for public office during a probe into severance paid to them as former officials in the City of Long Beach, the Republican candidate for Hempstead Town supervisor said Tuesday.

"I'm calling on both of those public funded employees to resign in wake of the fact that these payout scandals happened to them, under their watch, and as far as I'm concerned, with knowledge of what has taken place," said Don Clavin, Town of Hempstead Receiver of Taxes, who is challenging Gillen in November.

State Comptroller Thomas DiNapoli and Nassau County District Attorney Madeline Singas, both Democrats, have been investigating Long Beach payouts for more than a year. Schnirman has said he would cooperate with this investigation.

Nassau County Legis. Denise Ford, a Long Beach Democrat who caucuses with Republicans, joined Clavin on the steps of the county executive and legislative building in Mineola but stopped short of calling for Schnirman's resignation, saying, "the residents deserve justice, they deserve answers and they deserve the respect."

"No, I do not believe that Jack Schnirman should resign from his position as county comptroller, but I would like him to consider his payout and come before us and justify why he got the money that he got," Ford said in an interview after the news conference.

Clavin and Ford's sentiments come after a Newsday report Saturday showed Schnirman was paid for more sick days than he was entitled to after six years on the job, earning about an extra $6,640. Schnirman received a total payout of $108,000 for unused sick and vacation time when he resigned as city manager of Long Beach in January 2018 to take the county comptroller's post.

“I stand by my record of commitment and achievement as a public servant, and will not be swayed by dirty politics and desperate campaign tactics,” LaCarrubba said in an email Tuesday night.

"Being lectured on ethics by Nassau Republican politicians like Denise Ford who did nothing to stop the corruption of Ed Mangano is the height of hypocrisy. This partisan political attack from the Republican machine will not stop the Comptroller from pursuing an aggressive reform agenda led by his nepotism audit series," said Schnirman spokesman Rob Busweiler in an email.

Ousley said: "Maybe it's because Clavin has benefited from the corruption tax that Long Island families pay. Instead of attacking, shouldn't Clavin be explaining?"

Records also showed Schnirman never signed his termination pay agreements, which ask him to certify that the reported time and money owed him were correct.

In May 2018, Newsday reported Schnirman received full pay for unused sick days even though city code and his employment contract limited payment to 30 percent of the accumulated sick days.

LaCarrubba, former Long Beach public works director, retired in 2016 and was hired back in 2017 as a $39,000 labor relations secretary and a consultant on superstorm Sandy projects. In August his salary increased to $130,000. He was paid at the higher rate for two months until he left the city, for a total payment of $69,779, including a $20,967 retirement payout.

Ford, who was first elected in 2003 to represent the county's 4th Legislative District, which includes Long Beach, had demanded investigations since April 2018 when the city council refused to borrow $2.1 million to cover payouts already made to employees and retirees, including Schnirman.

"We still have not received any information from anyone about whether these payouts were legitimate or not," Ford said. "They are questionable and we keep asking and asking."

With Celeste Hadrick and John Asbury