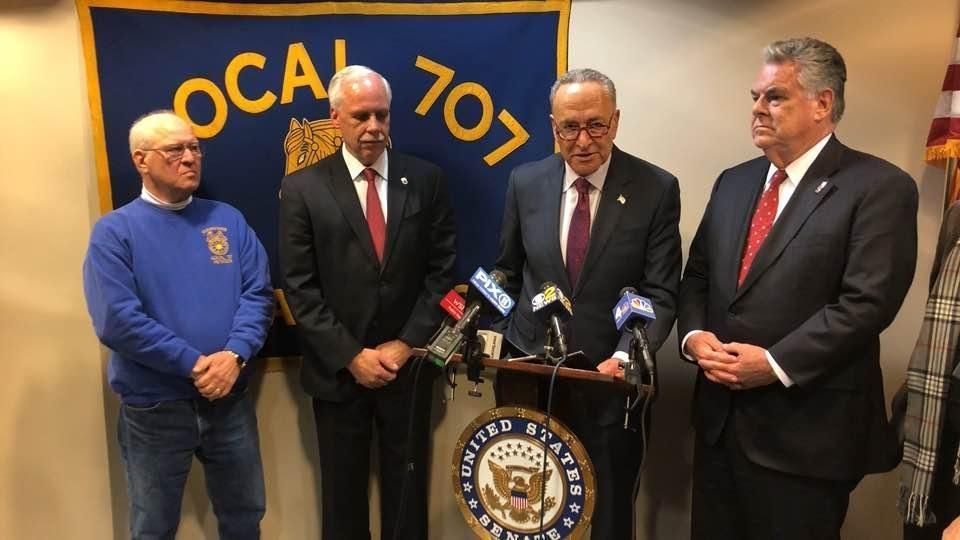 Schumer (D-N.Y.) and King (R-Seaford) are pushing Congress to pass the Butch Lewis Act, which would create a new office within the Treasury Department to allow pension plans to borrow for any shortfall using Treasury bonds issued by the government to sell to financial institutions.

Schumer, the Senate minority leader, and King met with Teamsters Local 707 in Hempstead to push for the bill, which could help fund pensions for 4,500 Long Island families, including more than 3,700 retirees, Schumer said.

“These pensions are on the hook for billions and could collapse,” Schumer said. “We have an obligation to these folks. These people worked hard and never asked for much and should not be abandoned.”

Teamsters and elected officials say the 2008 recession led multi-employer pension plans to become insolvent and the Pension Benefit Guaranty Corp. to be underfunded.

Suffolk Legis. Kevin McCaffrey (R-Lindenhurst), who also is president of Local 707, said the pension payments have been reduced because fewer younger members are paying into the pension plan after the deregulation of the trucking industry.

“All the men and women went to work with quiet dignity and had expectations to retire with that same dignity,” McCaffrey said.

King said the pension plan should have bipartisan support and that he would work to pass the bill with other Republicans, as part of the federal budget negotiations ending Jan. 19.

“The working men and women are the backbone of our country,” King said. “The rich have their advocates, there are advocates for the lower income, but the middle people seem to get forgotten.”

Schumer and King said the bill should be tied to the federal budget to fund the government as a must-pass bill in exchange for other expenditures such as military spending, Veterans Affairs and opioid abuse.

“We can’t blame it on the Democrats because we control the House and have a Republican president,” King said.